Despite their vicious appearance, Leocerdo are not prone to evil tendencies. In fact, they view themselves as protectors of the realms in which they dwell. They are normally the first to volunteer when someone they know calls for assistance. They will often gravitate to areas where assistance is needed most, or where war is eminent. While considered warmongers by most, the carchardians have proven to be champions of freedom, and securers of peace. They do not often form societies of their own, preferring to intermingle with the other races.   Physical Description: Reaching up to 10 feet in length, Leocerdo seem an almost monstrous combination of shark and merfolk, possessing both swift speed and great strength. Skin color ranges from blue, to grey, to tan, and their eyes are most often black. Unlike other merfolk, the Leocerdo's flesh does not change in appearance or texture between its two halves. Hands are webbed, and arms are ridged with fin and bone-like growths in both genders. Their heads remain that of sharks, though perhaps a little more expressive. Instead of hair they have thick flesh formed into pleated plates that start at the back of the skull. While both genders typically grow to the same length, females tend to be a little sleeker.   Ability Scores: 18, 18, 14, 14, 12, 10. One of the 18s must be in Strength or Wisdom, and the other cannot be in Intelligence but can otherwise be allotted to any ability score. The 10 cannot be allotted to Strength or Wisdom.   Racial Buoyancy: -110   Depth Tolerance: 1,000ft   Size: Leocerdo are large creatures, with the normal benefits and penalties that come with such size. Their reach remains the same as a medium creature.   Speed: 50ft swim, 5ft land.   Gills: Breathe water. This creature can survive out of water for 1 hour per 2 points of Constitution.   Senses: Darkvision 60ft, Low-Light Vision. Scent.   Charger: A Leocerdo deals double damage with weapons from the polearm and spear weapon groups, but only while charging. If the Leocerdo is somehow able to make multiple attacks at the end of the charge only the first attack is doubled.   Jaws: Leocerdo have a bite attack that deals 1d8 points of damage. This is a primary attack unless paired with an attack with a manufactured weapon, in which case it becomes a secondary attack.   Shark-like Features: Leocerdo treat weapons designed for a trueform as martial weapons.   Mount Restriction: A Leocerdo's large size prevents them from using normal mounts. Leocerdo require mounts of Huge size or greater.   Languages: Common. Leocerdo with high Int scores can select any language they want except secret languages. 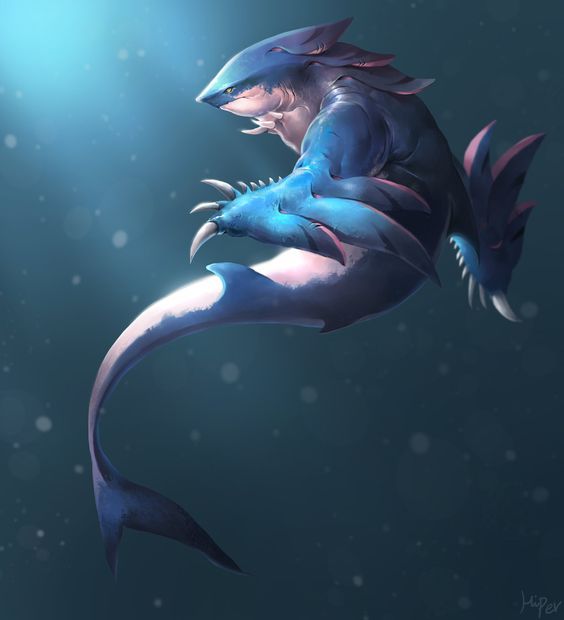