Nualia hired Lyrie primarily for her knowledge of arcana and architecture, her ability to read Thassilonian, and her arcane magic. Lyrie was in a desperate place when Nualia encountered her in Magnimar—she had recently been informed that she was no longer under consideration to join the Pathfinders as an initiate. She suspects bitterly that they kept copies of her notes and applicant thesis, and that their rejection of her application had more to do with the fact that they suspect she murdered two of the competing initiates. That this is true doesn’t matter to Lyrie. When Nualia offered to pay her in platinum to study Thassilonian relics, she gratefully accepted.   Lyrie is in her early twenties, with dark skin and long hair braided tightly into cornrows. She’s always had a poor self-image, a quality that has left her bitter, cruel, and quick to assume insult in innocent comments or to look at things in the bleakest possible manner.   Her only true friend is her cat familiar, Skivver, even though he has a bad habit of scratching and marking his territory   Despite her bitter nature, she has adopted an unhealthy obsession with Tsuto Kaijitsu, a fact he greatly benefits from. 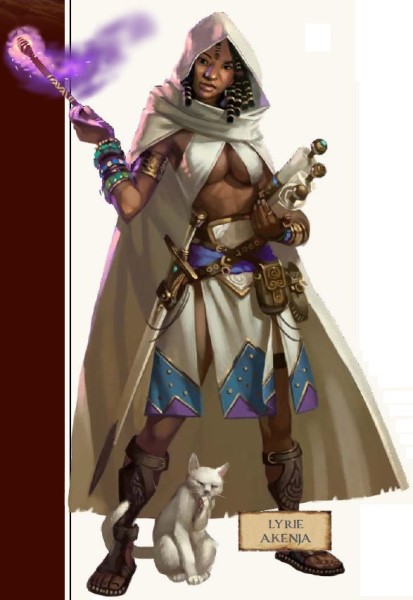