Gaston Cromarcky is the current overlord of the Varisian city of Riddleport . A former pirate captain, he has held this position for over thirty years, establishing a previously unknown level of stability in the town's security, trade, and the political scene at that time.

Cromarcky ascended to his position by killing the previous overlord (Riddleport's usual transfer of power) but soon implemented a major change. Instead of relying on the support of various fractious pirate crews and captains, Cromarcky used the gold hoarded by the previous overlord to hire land-based mercenaries and enforcers who had no local allegiances. He formed them into a military force called the Riddleport Gendares and made sure that they were loyal only to him. This allowed him to consolidate power in an unprecedented way, and he used it to bring much needed political, social, and economic stability to what was then just an overgrown pirate haven. In the three decades of his rule, the Overlord has been able to curb the gang wars which used to drive away business, and use his Gendarmes to enforce a laissez-faire system of laws that promote business while allowing the other crime lords of the city some flexibility

Overlord Cromarcky's rule of Riddleport has been marked by an unprecedented consolidation of power in his office, and the introduction of a certain amount of stability in the generally anarchic city. Ship captains who wish to trade with the city pay the Overlord a stiff protection fee in order to fly the Riddleport flag; this guarantees that their ships will not be molested by any pirate who call the City of Cyphers home. This arrangement has brought in a certain amount of trade, mainly from bold merchants out of Magnimar, and led to a rise in the general standard of living.   The city's protection racket, however, is far from Cromarcky's only form of income. He is also a partner in three of the city's largest gambling halls located in the Free-Coin District: the Dragon's Hoard, the Watercress, and the House of Nabin. These newish businesses have exploded in popularity recently, greatly helped by the fact that they operate tax-free and in a district that has disallowed the introduction of other gambling businesses, an ordinance believed to be directly the result of the Overlord's influence.   The Overlord has been a strong advocate of the Order of Cyphers, the organization of magic-users who study the Cyphergate. Most people believe this is due to the fact that the presence of large numbers of wizards helps increase the city's defensibility.     As of late, there have been rumors that Cromarcky's funds are beginning to run low, and that he soon will no longer be able to pay his Gendarmes. His greatest political rival, the crime lord Elias Tammerhawk, has begun test the Overlord's authority in various arenas, hoping to position himself as his natural successor when the time comes. 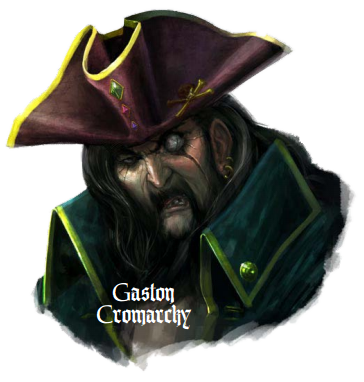