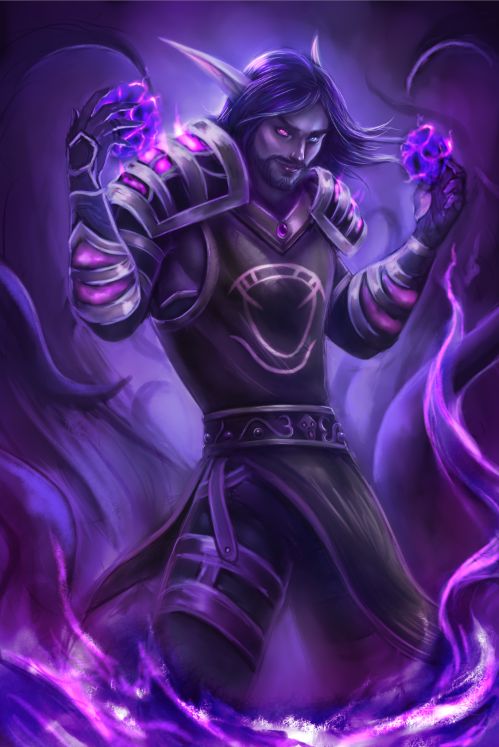 by Loco Corito
The Guardians of Golarion found themselves atop the temple of the mad god Tharzduun, staring at the dragon shard which contained the partial essence of Tharzduun’s herald Zalatas.   While some of the party examined the crystal, trying to figure out the best way to remove it from its cradle, Lady Chardrissa and a wounded member of the Cirlcle of Shadows who had been released from the thrall of a Voidcaller, shared whispers. Their conversation was cut short as Fjord stepped up behind the assassin and discharged a Shocking Grasp to the back of his head, killing him. Fjord admitted that he didn’t trust the drow and he felt the party was playing into Lady Chardrissa’s hands. Lady Chardrissa countered by insulting Fjord’s lineage, calling him the son of a donkey.   The crystal was freed from its cradle and it shrank to the size of a human fist. Sir Godric put it in his bag and the party left the area. They decided to check to see where the other set of stairs they had discovered, led to. Hundreds of feet later, they emerged in what looked to be a mix between a warehouse and a library. Huge display cases and shelving units rose from the floor to the ceiling. The shelves were stuffed full of deliberately placed pieces of gear and equipment, each sporting a name card in Ancient Abyssal. The cards identified the item, and the magics used on it to attempt an enchantment of some kind.   The center of the chamber was dominated by a massive contraption of glass and metal tubes. It was a delicate assembly of arcane components, and while the other items on the shelves had long since degraded to uselessness, this artifact still radiated active magic. Several glass pipes and wire filaments bridged the gap between the ancient machine and the circle of metal tables that surrounds it. These blocks all had humanoid-shaped indentations on their upper surface.   On one of those tables lay a male drow, naked, strapped down with a small cage placed over his head. Several probes stabbed into his body from the back. As the group approached him, they were ambushed by two Circle of Shadow assassins and two Voidcallers. It was a long battle, but in the end, the Guardians survived and dispatched their difficult assailants.   Lady Chardrissa freed the drow, Rylvir T'sinath, her consort and trainer in the arcane arts. Rylvir thanked the Guardians for saving them both and offered a reward. If they could find a tiny chest that belonged to him, he could give them the contents. This was a component of the Secret Chest spell. Eventually, the party found it and Rylvir made good on his word, summoning a larger chest and bestowing its contents on the Guardians. He then offered the chest itself as a way to get rid of the dragon shard. If it was placed within the larger chest, it could be sent to the Ethereal Plane. Then, by destroying the smaller chest, the larger chest would be lost in the Ethereal Plane. The Guardians took the chest, sent the dragon shard away, and Godric destroyed the smaller chest.   Satisfied that they had been in the temple long enough, the Guardians headed back to the elevator which would take them to the surface. An hour later, they could make out the light from the elevator. But they were also filled with a feeling that they were being watched. Kuuro and Reh, invisible, scouted ahead of the party. They were the first to see Zalatas and Lasdolon Azrinae standing in front of the elevator. Zalatas smiled and said, “My children, we have much to discuss.”