The Rock, as it is called, is the most well-known landmark of the City of Jadir, or frankly of all Buchar. Towering above the surrounding land, it can be seen by ships and travelers from over 20 miles away. The feature, made of pure bedrock, rises from the ground with nearly vertical walls and climbs to a height of over 350' at its highest point.
Best known for its size, it is almost as well known for the great crack that separates the massive rock into two distinct forms. The larger and taller of the forms is formally called High Place for it's obviously larger stature and as a shortened version of High Holy Place. On it, you will find a garden, ruins, resting places, and place of respect for old and forgotten gods. It is also called Hamdan for the ancient hero of that name, Palace of Dead Gods, The Old Heart and The Watcher. It also has several names in the tongues of the other peoples of Jadir.
The smaller and slightly shorter structure is called Palace Rock, as it is the home of New Palace, but it is also called Fadma, after Hamdan's estranged lover, the White Tower, The Greeter, and by the humorists of Jadir The Palace Cellar.
As for the greater structure itself, beyond it's most common name, The Rock, it has more names now and historically than can realistically be listed: The King, The Mother, The Guardian, The Lovers and The Twins are just a few.
The top of the Rock can only be reached by the Palace Rock side. It has a steep road built into its south side, and an elevator mechanism on the west side. The elevator is used by people with official business at the palace, cargo, and tourists who are willing to pay.
People going to the High Place are expected to take the road if they are physically able. This short but strenuous pilgrimage is considered part of the religious experience. Once at the top, religious visitors continuing to the High Holy Place must take the marked path, but may use either of the two bridges, called Garden Bridge (North) and Memory Bridge (South).

The site actually has three different purposes, depending on the pilgrims and gods involved.
It is a place of respect and/or beseeching. Not all the old gods are fully gone. Some are around and still have a degree of influence in the world. While the New Gods are dominant, they are also remote and accessible only through their clerics. The old gods who are still around actually walk among mortals. So some visitors go hoping that their requests will be heard and answered, that deals or pacts can be made, or at the very least that the gods will be pleased by the offerings and respect presented at their shrines. It is rumored that some of the pilgrims are the Old Gods themselves, either listening in or observing, though this has never been proven. The purpose of Garden Bridge is to take pilgrims to the Garden of Old Gods, so that they can be named and remembered.
It is a place for remembering the Old Gods who are no longer among the living. Many of the Old Gods were slain during the great cleansing, falling to dwarven blades that bore their names. Such gods are gone from the world, but pilgrims go there to remember them and their stories. Some of these fallen gods are remembered inside the Garden; others have places outside the formal garden in the many structures.
It is also a place for the forgotten gods. There have been many gods through the centuries of the world--some tied to specific rivers, forests, events, or dreams, just to name a few. There are no shrines that give these gods names, but also many shrines exist for which a god is not known. Thus, Memory Bridge takes the pilgrim through a path of ruins, artifacts, relics and unknown totems to obscure, obsolete or simply forgotten gods whose names have been lost to even the oldest of the elves. Even the path up The Rock has shrines, murals and pictographs tied to these forgotten gods.

In High Place, there is ongoing restoration and maintenance in the Garden of Old Gods, and such work is especially focused on the gods who may still walk the earth. However, the shrines and other remembrances of the forgotten gods are never changed: not by visitors, not by the Jadiran staff who maintains the Rock. This is both because there is a belief that things should be left as they are, but also because nobody is sure what the original shrines looked like, and so changing them might inadvertently dishonor a god.

Beyond the imposed architecture of the garden itself, there is no fixed architectural pattern to any of the shines. The Old Gods represented any number of things over several millennia, and their creators had no specific rules to follow, except to honor the gods for whom they were making it. Some were literal, some were abstract, and still others followed the instructions of the gods themselves in the making. While most of the surviving shrines are stone, it is known that wood, paper, gems, plants, the four elements and various symbols were included in the construction.

Jadir is the oldest human city in the world, and is also one of the largest. It also has comparatively easy access to many other parts of the world. As such, the Rock has visitors from within the city and country, surrounding countries, and visitors who are in town from journeys as long as a year.
There is a thriving business related to the tourists, such as housing, historical knowledge, memorials and proxy visits for those too far away to visit again. To this last point, there is a widely held belief that the first journey must always be made by a supplicant, but after that, another may be hired to make subsequent trips. Whether this is true, a desire of pilgrims to remain in good standing, or a desire for local citizen to make money by continuing to climb the hill each day for a new client has never been fully settled. 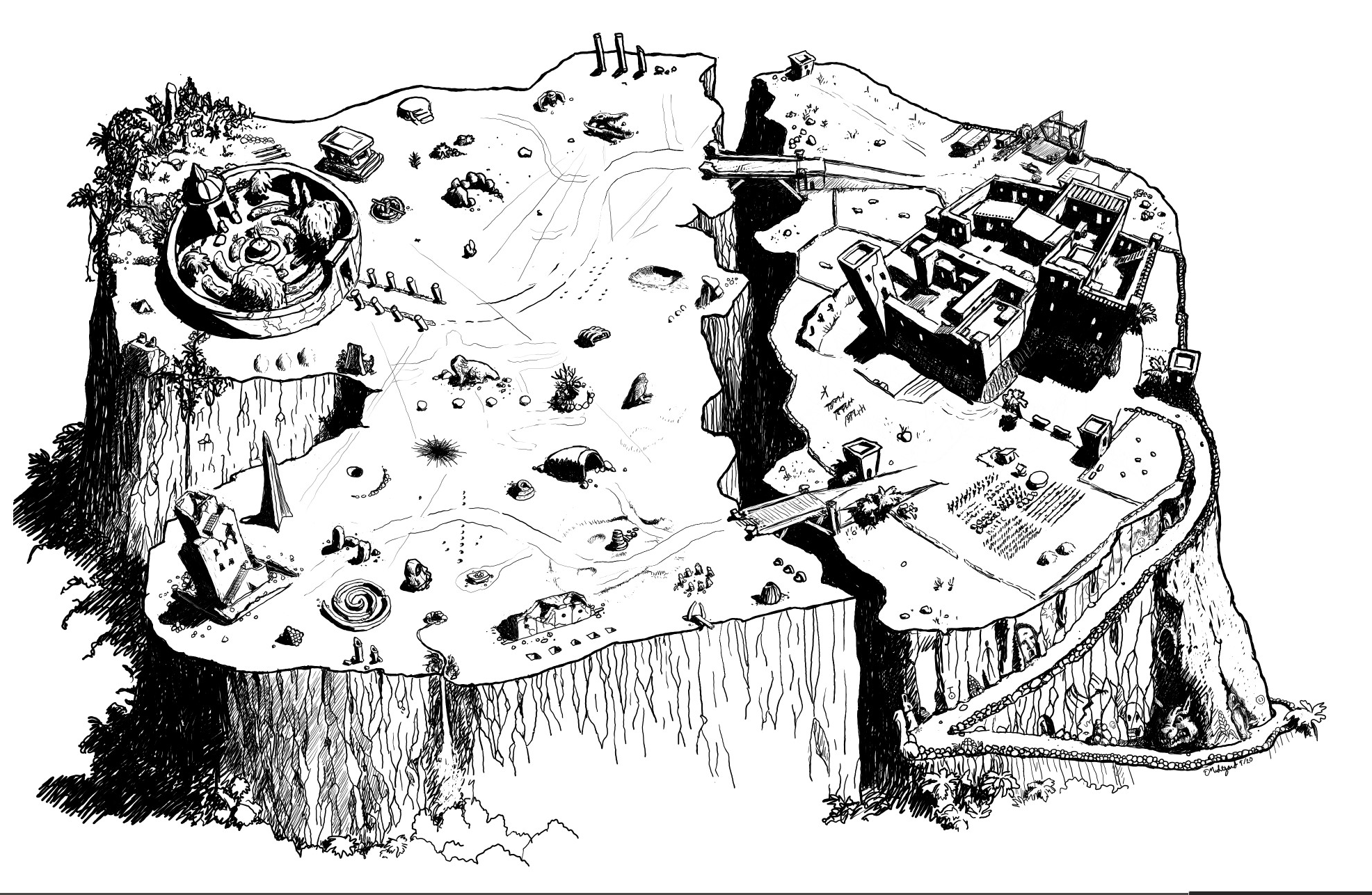 The Rock by (c) 2020 Ericka Midtgard. All Rights Reserved
Type
Temple / Religious complex
In response to the prompt Describe a religious monument (built or natural) which people of your world wish to visit at least once in their lifetime