Right-handed (for writing) but will sometimes write with the left hand (it is more legible than her doctor’s handwriting...) Non-writing - left hand tends to take the roles first…

Upon her recognition of literomancy, TaraFaeBelle found herself to be a shapeshifter, from human to microbat. It would explain a few things, especially from her father’s side of the family. Alas, her Grannie keeps changing the topic when it is brought up, so TaraFaeBelle is yet to see how far her abilities go.   Her unique set of synaesthesia types merged with literomancy has allowed her to see two worlds at once, generally with the latter an overlay of the former in the following: She has been learning to grow her wings as a shield, as well as conjuring up stalactites and stalagmites for people-watching purposes in her downtime.

She does like to dress up, though has nowhere to go to. (Except for once, when she and her husband won Best Dressed Couple at a Disney ball as Beauty and the Beast. The best part was on the way home though, when an unrelated group of kids were whispering on the train that they got to see a princess and the joyful expressions on their faces as they shared greetings.)   She wears two rings, one on each hand. One is a wedding ring (diamond) from her husband, the other, a coming of age ring (peridot) from her Grannie.   She also made a wire bat and will often have it on or around her., similar to the totems others may have.

They say the pen is mightier than the sword, but what if the pen is the sword? A question that grew over time into TaraFaeBelle creating her own sword pen collection (both bought and forged by her own hands). The two she commonly dual-wields are named ‘Humility’. 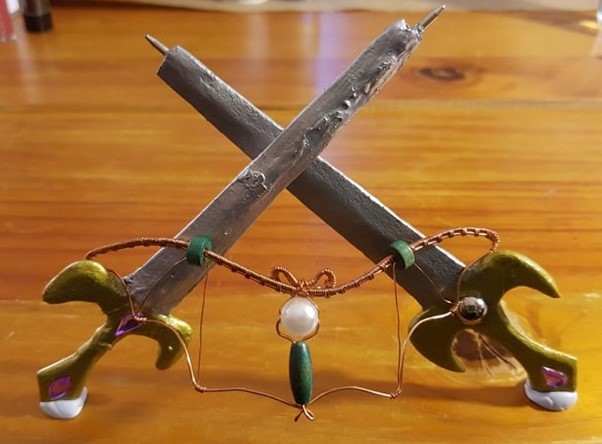 She always has a notebook and pen of some sort (even a pocket-sized set for travel). She can occasionally be found writing while walking on her way home. Writing during flight is more difficult, but is determined to work it out someday. 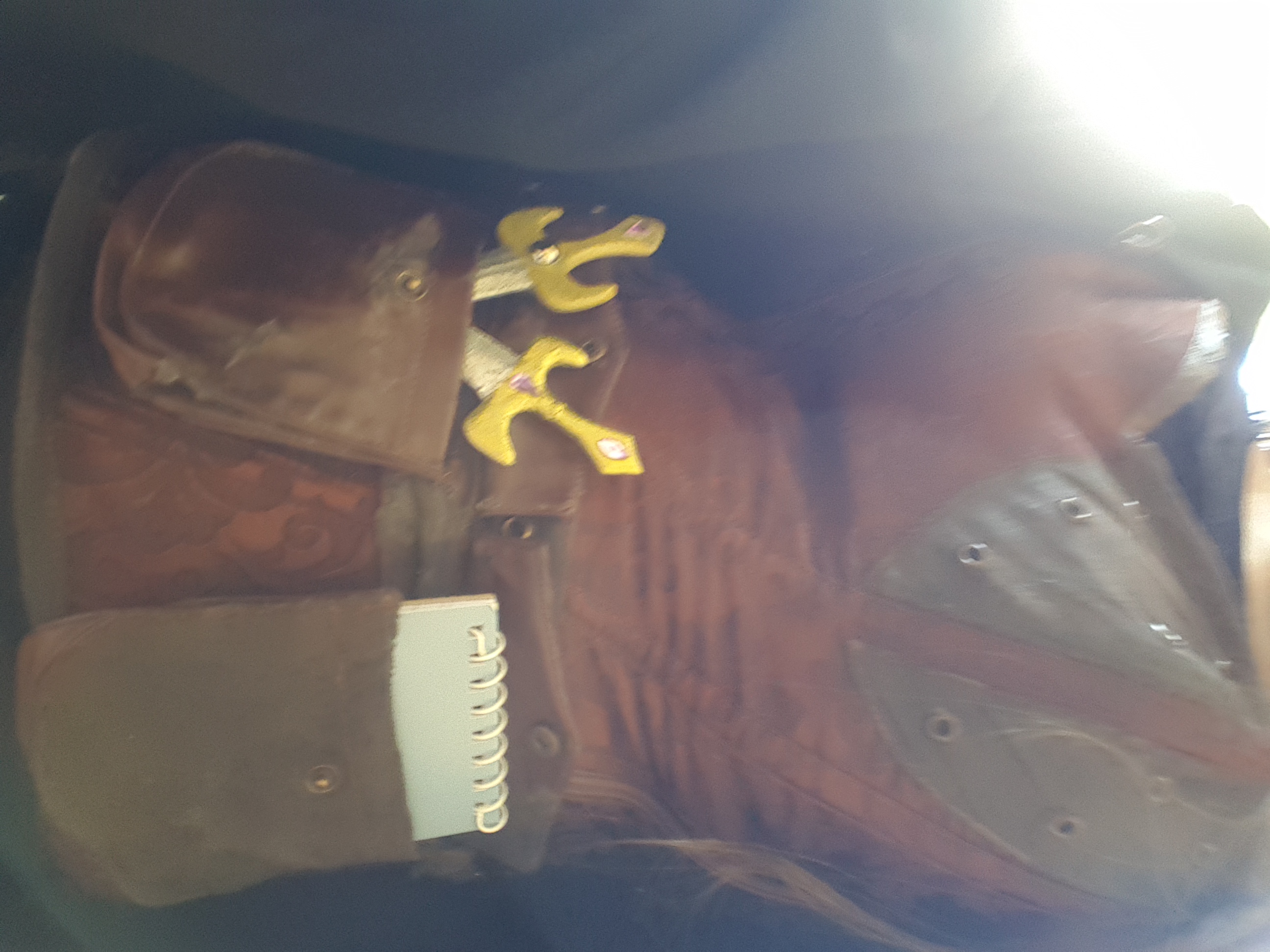 Born into a family of storytellers, you would think this bat knew literomancy from the start, right? Well, she was probably meant to. Unfortunately, she started with a quiet voice that was often a beat behind the rest. Turning away from superfluous interactions, lies filled her mind where the literomancy should have been …   Australian born and raised, although there are beaches nearby, this little bat don’t play well with the sun. It scorches her dry. She peels and then its back to white skin…   She was always a little bit different, saw the world a little bit differently. Felt like there was a coloured glass wall between her and the ‘normal’ of this world.   Later on, she just managed to complete a Bachelor of Chemical and Biomoleculer Engineering with Honours - getting an award for her writing of a report - that had more to do with the observed human relations of her work experience than any actual engineering work.   Writing was not ‘a worthy profession’ as far as she knew for a long time. Yet she could not help but pen down words in phrases and sentences, filling the ends of notebooks in poems and stories. Dragons flew through the air and elves shared the forest of her backyard.   Yet she dared not share those words aloud.   At least, not until she found herself barely surviving in her own mind. She sought help and was thrust with “You need to write” from her psychologist. “Yes, I know,” she replied. Yet the guilt didn’t stop. Shouldn’t she be living in this world? Shouldn’t others take precedence? Many other questions filled her acceptance of what she must do. But over a few months of rebuilding her brain, and recognising that others’ ‘normal’ didn’t have to be hers, that the way she saw the world wasn’t wrong, just different, and different is beautiful. A different mental landscape just needs a different gardening regime.   Then she got it.   “I am allowed to write. I allow myself to write.” An explosion of colour like never before. A freedom she never knew she needed. And pathways opened up. Literomancy was revealed to its fullest. Syneasthesia merged with the words, making magic and revealing forms.   One day when she was just travelling through the caves from Australia and landing somewhere over in Canada:   A tiny bat lost in a cave awoke from behind a rock… And through the cavernous depths saw a red of hair so bright. The red shined. The tiny bat’s eyes shined. Enchanted by the Queen of the Night she was… A few months later, a war began. A nudging from zombie fiend. The Queen of the Night cried, “A body guard in need am I”. A tiny bat replied, “I can, can I?” Knighted with the title of Nightwing the tiny bat threw her wings awide. “No zombie stench shall fowl my Queen. A life of allegiance or I will die…”   With her newfound love of words, of self and of the community she found, TazFa wrote to grow her literomancy abilities. These include learning to grow her wings to a large size, with shielding abilities in order to let her Queen escape imminent threat and word another tale.   Forging dual sword pens she swore to protect her friends and their world.   And then, on November 27, TaraFaeBelle caught the filking plague. She thinks she did pretty well for her first recording, if you subtract the layer of nerves that covers the whole thing.

A virtue of hers is patience, especially when teaching another person.

Vice: Potato chips. After finding out about all of her food allergies, she had little other junk food to snack on. But now she gorges.   She is very quiet and often confused in social situations. 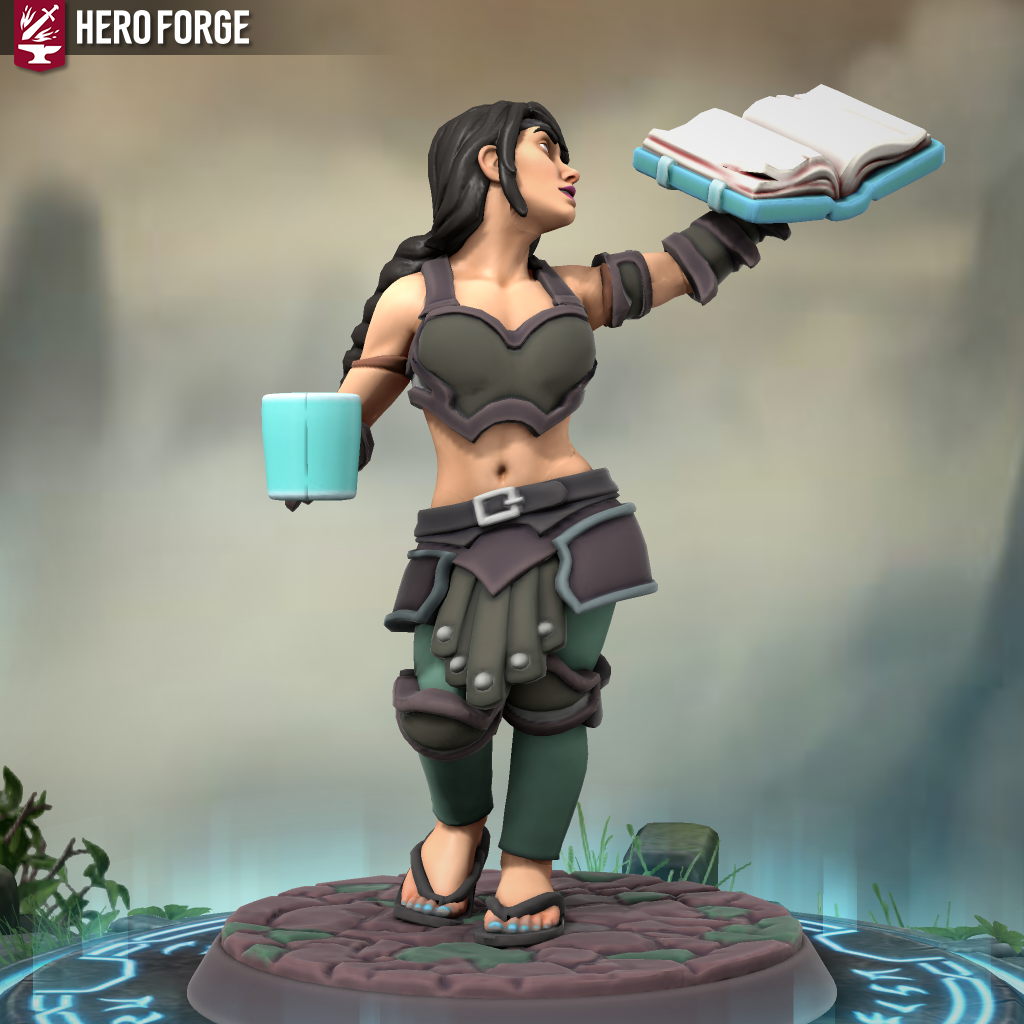 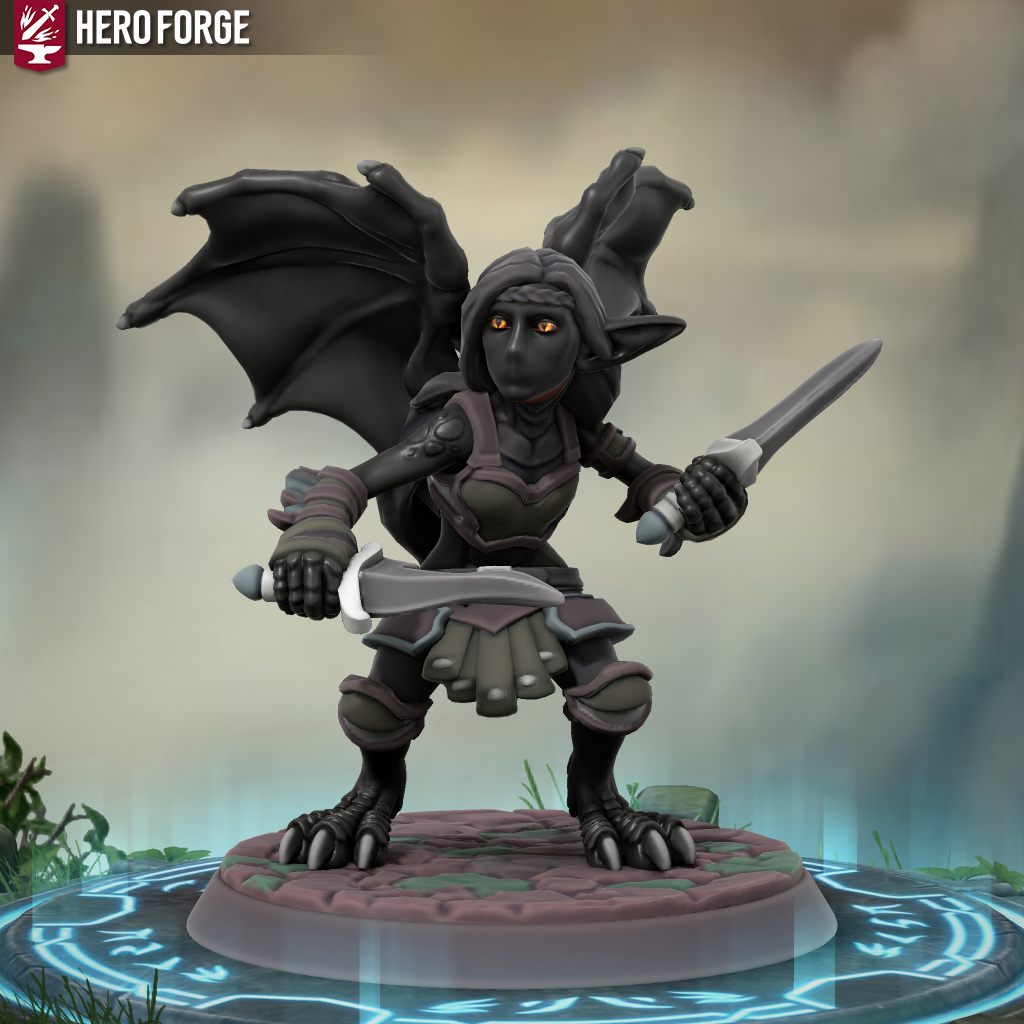 We’re getting past Hello’s and acknowledgements here? *dies of happiness overload*
— TaraFaeBelle

Belief/Deity
Believes in a Creator
Aligned Organization
House Chiroptera
Known Languages
English
(Every so oftens remembers she was creating a new language, but never where she put it…)
Ruled Locations 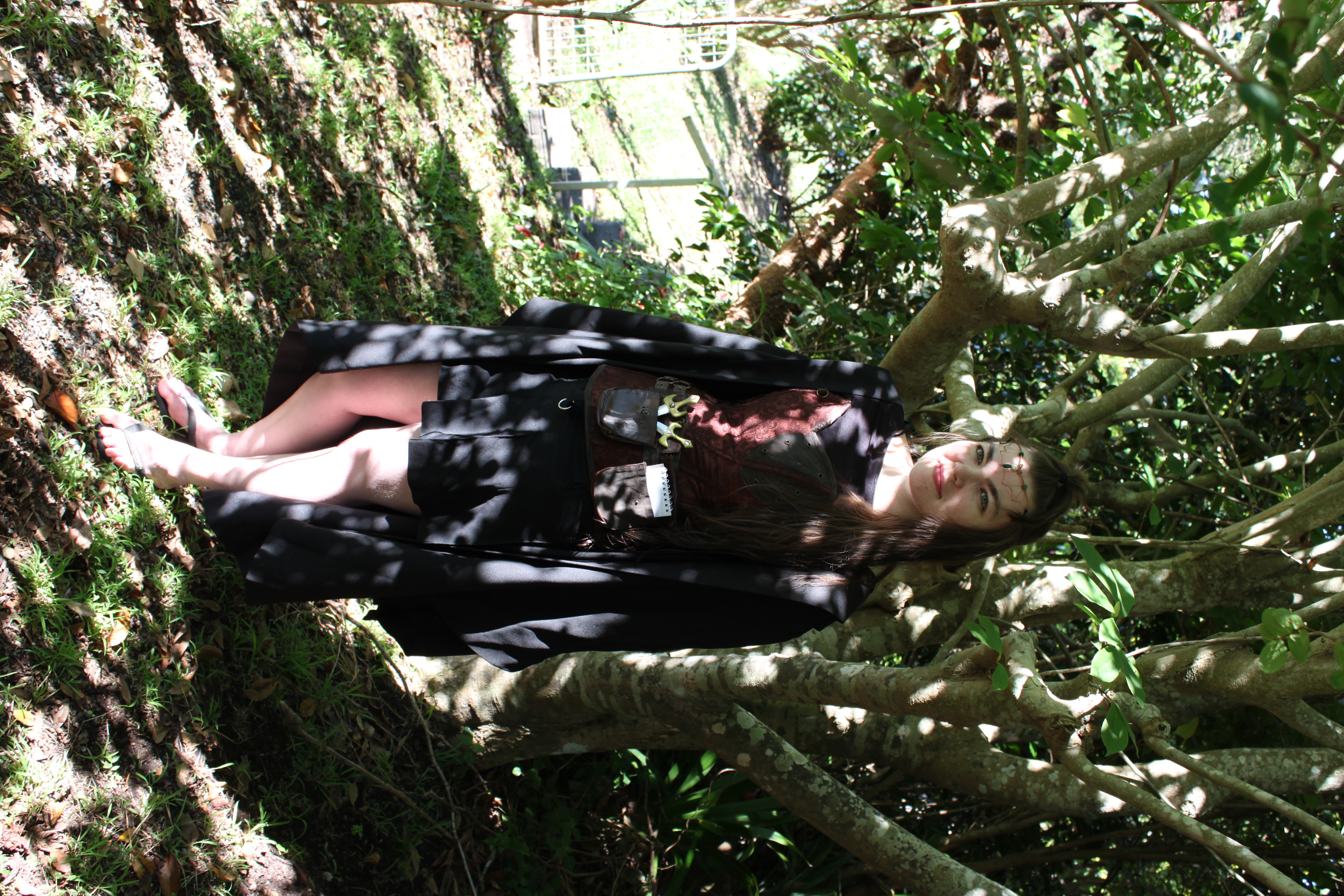 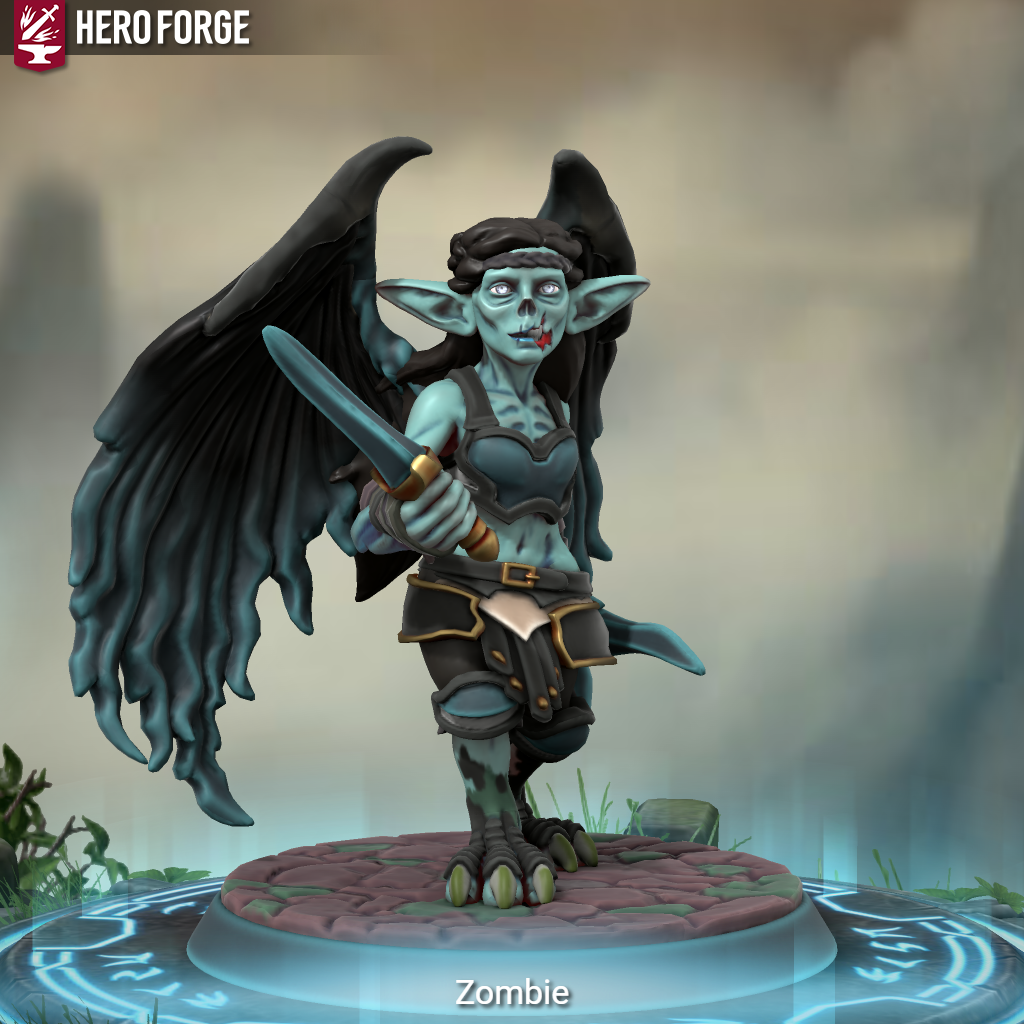