Gahla is a turbulent planet where the shards of dead continents rest deep below a hot and roiling ocean. The sea covers the entirety of the planet's surface, save for a few rare anchorspires. These stalagmite formations jut upwards like obelisks from Deepsea vents. They last for a few decades before crumbling back down due to erosion from the incessant winds and waves. High above the Saltsea ayrlands float atop the surface of a swirling span of clouds, fueled by the life force of their natural ecosystems.   The ayrlands are propelled upwards by flux-burning jets that provide nourishment for corals that grow on their undersides, and the myriad species that dwell on the ayrland's rocky reefcrusts. As an ayrland's reef develops, it forms a hardened shell that prevents the ayrland's soil from crumbling away and protects it from collisions.   Level and stable ayrlands are rare, fleeting, meticulously developed, and jealously guarded. Only on these fragile scraps of solid ground can anything resembling civilization be constructed. Gahls can never get too comfortable though, for always there are abyssal gales, dragging the ayrlands southwards through the sky into a great grey-black tempest. 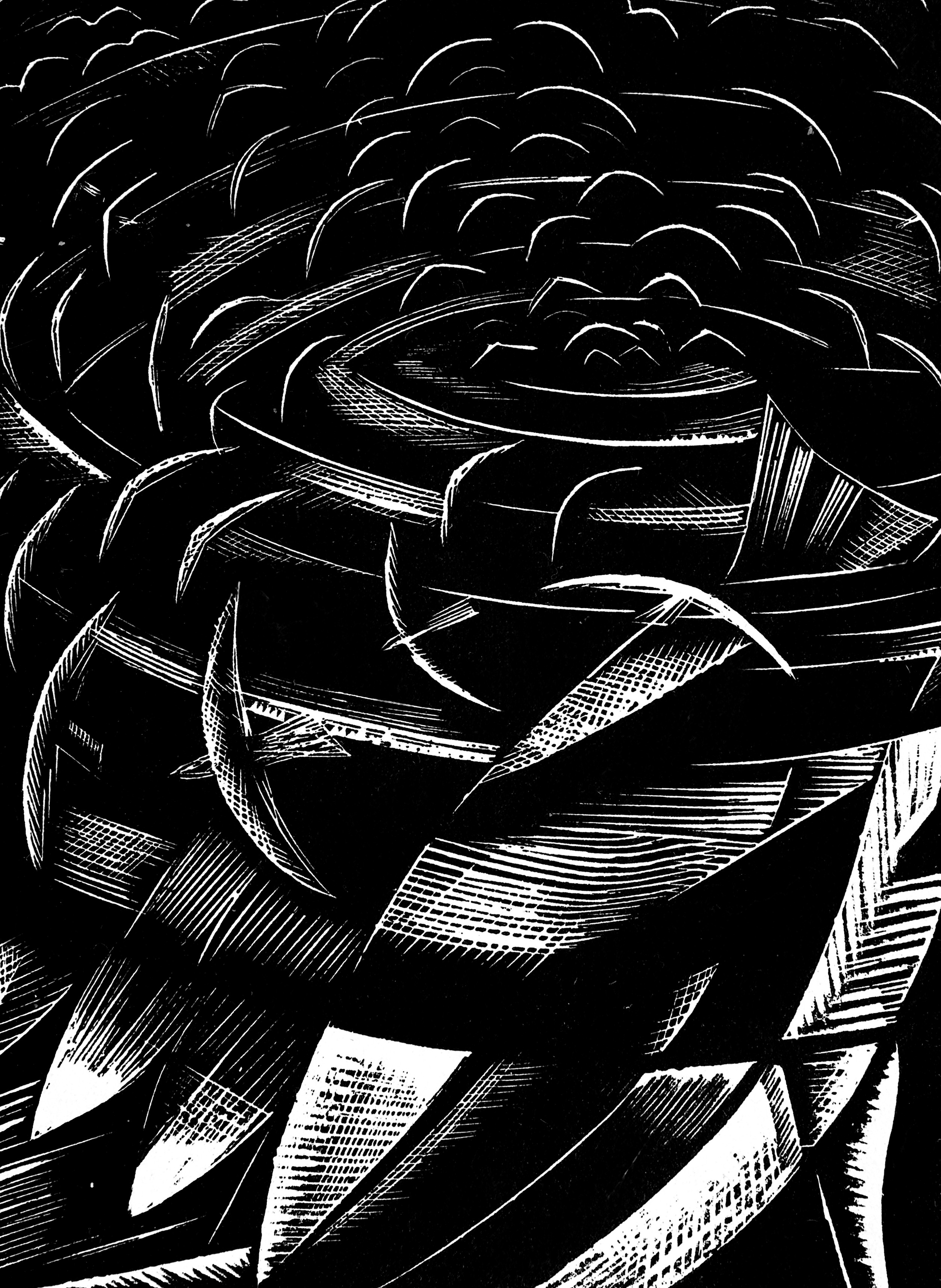 by Paul Nash (PD)
Towards the southern climes, the oceans eventually cool and freeze over, and a slurry of ice and fallen ayrlands comes together to form a shifting and shattered glacial continent known as Fryggidios. Here, rugged adventurers eke out a threadbare existence, and delve bravely into the Deepshards to raid the tombs of fallen nations frozen under the ice, before they sink for good.   In the skies above Fryggidios, the ash-laden winds of the great Tempest draw the ayrlands inexorably closer towards the Abyss, a cursed bottomless pit from which no one has ever returned. Even those who never venture into the chasm find that merely gazing into its depths leaves them scarred in subtle ways. Subtle, at first, anyway.
Through an effect known as Wickening, the abyss robs a person of their memories (or relieves them, depending on how you look at it). It begins with the small memories, barely noticeable at first, but by the time it is done, little is left of the victim but a single-minded hollow.

Using magma-forged meteorite chains, it is possible to leash the ayrlands to the anchorspires. This risky venture earns the Chainlanders a few decades of blessed stability, so long as the tethers hold and the ayrland keeps puffing. But these semi-permanent settlements are only for the lucky and wealthy few.   Most Gahls are pilgrims, pioneers, prospectors, or pariahs. They live ever on the move northwards, following the gold rushes and the flux blitzes, accompanying the migrations of giant birds or colossal sea-turtles, and fleeing the frothy pitch-black wakes of Deepsea Leviathans.   Some might stop at the ayrlands to trade, harvest resources, and hunt game, while other cultures have learned to guide the smaller ayrlands through the skies by turning the land into living ayrships. They craft sails and rudder wings from flutewood, bone, silk, leather, feathers, or leaves, but struggle to put up a fight against more industrialized powers who would sooner extract what they can from their ayrlands.
I am so excited to bring you more Galeblazers! Click here to support me.

Remove these ads. Join the Worldbuilders Guild
The Forces Majeure
All images in this project tagged (PD) are in the Public Domain
Background image by Todd Wivell(PD)