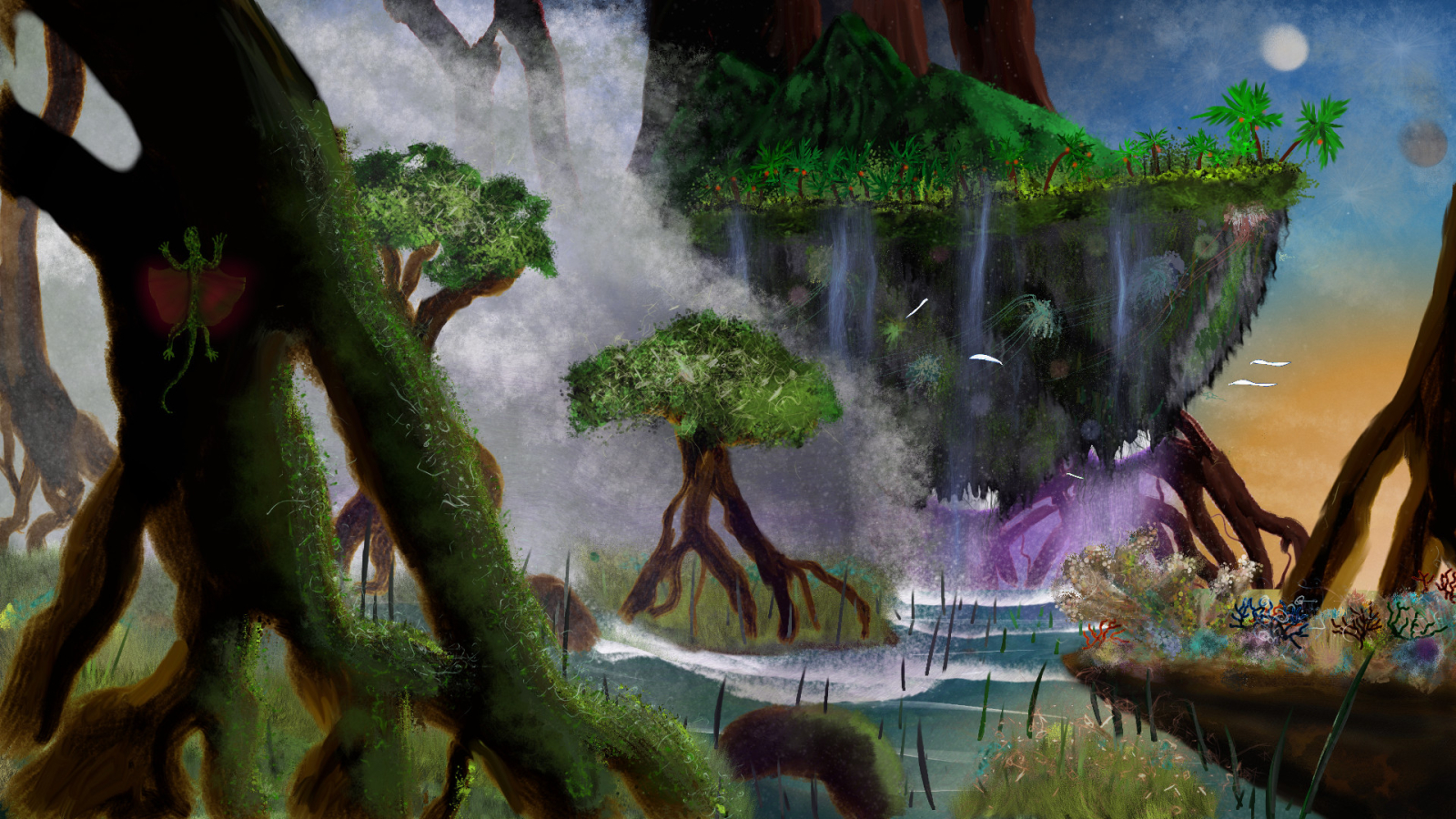 Ayrlands are flying hunks of buoyant Ayrth cradled in reef-rock shells, thrust heavenwards by ventral jets, and fueled by nature's own distilled elixirs. With every turning, the thousand ayrles of the Old World paint the sky with ghostly streaks of radiant Lingerlight, as they spiral around the worldly axis. Shoved to and fro by the gales, they gracelessly skim across vast seas of clouds, and bob atop the cushions of dense aethereal gasses that spew down from their reefjet's scalding vents.     Through what opaque lens could one hope to reveal the deeper nature of that which seems so routine to any Gahlan? The ecologist might wax expository about the three keystone habitats found on every ayrland - the reefcrusts, the underhollows, and the topspans - complete with all the intricate taxonomic webs of flora and fauna that inhabit them. The meteorologist can point a pilgrim to a particular ayrland, or divine what resources might be unearthed from its geologic innards. The ayrchitect might lecture for days about the vital infrastructural networks required to keep a settlement sturdy and balanced in the face of punishing gales and troublesome skayrries.     However, to the great consternation of all three, the mortal sciences have yet to offer us a unifying theory on the fundamental questions: How exactly are the ayrlands formed? When did they begin forming? Did they rise to flight from the mundane crucible of time and fortune, or were they lifted to the skies by the hand of an inspired designer? And if so, was that engineer of supernal origin, or could the whole construction fit within the schema of human capability?

Dearheart child, beg me for a Once-Upon-A-Turn and I'll oblige on any dusk! But spare me pester for an In-The-Beginning. Let the sages bicker on that score 'til their beards freeze, and their livers turn to putty.
— Martha Burzell, Asst. Orphankeeper at the Widows Guild

In its archives, the The Vidrian Reflectory maintains a dozen notable theories on the matter, each of which offers the better half of an explanation. None have been deemed worthy of entry into the Crystalkanon for in the divine tome, the Luminaries will tolerate only the unimpeachable truth, and the truth in full. As such, the formative chapters of our storied existence remain as embarrassingly blank as the pages in the Book of the Missing God.   Yet while the origins remain a mystery, we need only gaze southward to recognize full well how the world will end, and who will bring it about. Even the moniker "The Old World" suggests the prevailing sentiment among all Gahls south of the Veil: that the uncharted northern hemisphere of Gahla is where lands are born anew, and the south is where things old and spent go to die. I speak not of the abyss alone.   On an ayrland, every tomorrow is balanced on the dagger's edge of Gahla's capricious whims. This would be a dangerous enough position notwithstanding our overeager schemes to rip ever more steel from the ayrth or fish from the clouds, to sacrifice ever more forests for fields, or to siphon ever more flux from beneath the reefcrusts.   Would even the sight of a thousand blanched necropoliths impaled upon the ice dissuade a man from tempting Gahla's fury, if it interfered with his ambitions? The answer, I fear, is as simple as it has always been.
I am so excited to bring you more Galeblazers! Click here to support me.

On the top of an ayrland, one may find any number of sub-biomes, from rolling reedgrass hills, to glowing fungal bogs, to thick flutewood forests.

Cradling the mass of every ayrland is a bowl-like formation of hardened clay and lumestone called a reefcrust. It is populated by a myriad species of coral, anemone, sponges, barnacles, urchins, and mollusks.

Beneath the surface of every sizable ayrland is a network of caverns and tunnels that folks call the Underhollows. Closer to the surface, the hollows can be a profitable place to mine for resources. Deeper down, things get more dangerous...