Art by Dominik Meyer
Magic flows through every inch of Gaizha. Every leaf on every tree, every drop of rain, and every grain of sand possesses at least a little bit of magical power. This power is most obviously seen in Gaizha's signature natural disasters, which, due to the influence of various magical forces, are much more frequent and powerful than they are on other worlds.   Through the tutelage of Elementals in times long forgotten, humans have learned to harness the power present in natural disasters and use it to shape the world to their liking. By using magic, humans have conjured great storms to crush armies, constructed beautiful monuments from only their thoughts, and have built vast networks of magical machinery. 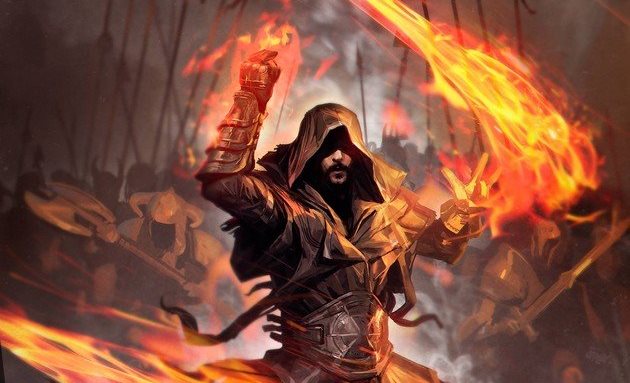 "Magic" happens when a human being enters a state known as the Sway. To enter the Sway, an initiated mage must focus and tap into the latent elemental energy flowing through Gaizha. Each kind of natural disaster has a pair of traits associated with it. Storm Magic, for example, has the traits "Dispassionate" and "Relentless", and when a mage enters the Sway, they will have these traits heightened in them. Once a mage is in the Sway, they can use magic.   Magic differs based on which disaster's Sway you are in. Storm Magic, for example, gives mages the ability to produce lightning and clouds, control the wind, and summon massive bursts of thunder to dizzy opponents. Earthquake/Tectonic Magic, on the other hand, allows mages to raise up terrain, crack open the earth, and form massive geysers. Something interesting to note is that normally dangerous substances produced by mages, such as lighting or fire, do not harm the mage that summons them.   To be able to access the Sway, a mage must undergo a Ritual. Rituals are elaborate processes that involve coming into contact with massive amounts of elemental energy while also attempting to wholly embody the Sway of whatever disaster you wish to master. Single disasters have multiple different Rituals, and they can differ based on climate, specific versions of the disaster, culture, and resources.    One well-known Ritual is the Nonapa Ritual to become an Earthquake mage. Most Earthquake mages in Nonapa culture focus on the volcanic aspect of that magic, due to N's abundance of volcanoes. The traits of Earthquake magic's Sway are "Slothful" and "Observant", so to become an Earthquake mage, aspiring Nonapa mages must sit in front of an active volcano and remain completely still, with their eyes never wavering, until the magma begins to burnt them. Once this happens, they will release a massive amount of elemental energy, saving them from further harm, and will have become a full Earthquake mage.

While entering the Sway can have a negative effect on the personal relations of a mage due to changes in personality, the true danger of using magic comes from the usage of elemental energy. When a mage uses their powers, they draw on the underlying magic that flows throughout Gaizha. This "irritates" the natural world (more than it already is, at least), and can cause spurts of wayward elemental power that can change the environment for various amounts of time.

When an "irritation" happens, various phenomena occur that vary depending on the type of magic used. A constant seems to be that animals (including humans) become more territorial and ferocious. For a more variable example, when too much storm magic is used, an irritation might occur in the form of suddenly frequent windstorms that can tear buildings apart and blow small animals away.      Any usage of magic attracts hungry Elementals that are nearby. When far too much magic is utilized, this can cause an Elemental Tear, where masses of Elementals pour out of the Primal Home and begin wreaking havoc.

Each natural disaster's Sway heightens different traits in a person. They are as follows:

In certain areas of Gaizha, the borders between different types of magic blend together. In vast desert regions, for example, many cultures practice a unique school of magic known as "Sandstorm Magic" that blends Storm and Earthquake magic together.

As an example, A sandstorm mage has access to both Storm and Earthquake magic, but without sand, they can only control wind and cause small tremors.