The Gish "Kalpyat Style" is quite reminiscent of its namesake indeed. The technique focuses on maximizing the effect of singular, powerful blows that disrupt opponents' coordination, emulating the overwhelming power of a kalpyat's charge.   -Mifla the Warmind, in Weapons and Combat in the Wind Worship World, circa 402 AW

art by ilison on DeviantArt

The yak-like kalpyats are one of the staple domesticated animals in Gishik and surrounding areas. Along with the Bashu and the Zhuptik, they make up the trifecta of animals domesticated by the Gish for transport and harvest.

Kalpyats are large, bovine creatures. They're most famous for their large horns, which stretch out horizontally for a foot and a half before pointing up. All Kalpyats sport four legs with cloven hooves, and several stomachs with which to chew their cud. In regards to their wool, Kalpyat wool is famous for being very soft and good for making clothes and other cloth products. It comes in several colors naturally, including white, brown, auburn, and black.

Kalpyats live for about twenty-five years in domesticity. A kalpyat is considered an adult at age five, when it is able to give birth to a kid. They reach peak physical fitness at about age seven or eight. As a kalpyat grows, their horns continue to grow out as well, and they must be continuously cut and trimmed to be kept to a manageable level (wild kalpyats would slam their horns into rocks when they became too heavy).

The expansive Gish Plains were the original home of the kalpyats, and they thrive the most in that environment (or a similar one). In the wild, kalpyats roam in large herds on the plains, feasting on the grasses that the plains provide. Their large size, strong legs, and tendency to cluster allowed them to keep safe when Gishik's famously powerful storms make landfall.

The primary diet of the kalpyat includes the grasses and other small, leafy plants dotting the Gish Plains. However, they are also fully capable of consuming grains and non-grassy vegetables if need be.

The primary usage of the kalpyat is for its wool, which is well known across the Wind Worship world and beyond. Their milk is also highly prized and a staple of the Gish diet. Their size and strength also makes them useful draft animals, even moreso than Zhuptik, although zhuptik fare better in areas of higher altitude.    Kalpyat meat is very filling and nutritious, but it's more often eaten on special occasions than as a staple due to the size and effort it takes to effectively slay and cook a kalpyat.

Most kalpyats are located in Gishik, primarily on the Gish Plains. However, their use as a source of wool and milk, and as draft animals, has gotten them as far as certain Antom tribes in the north, past Shivish. 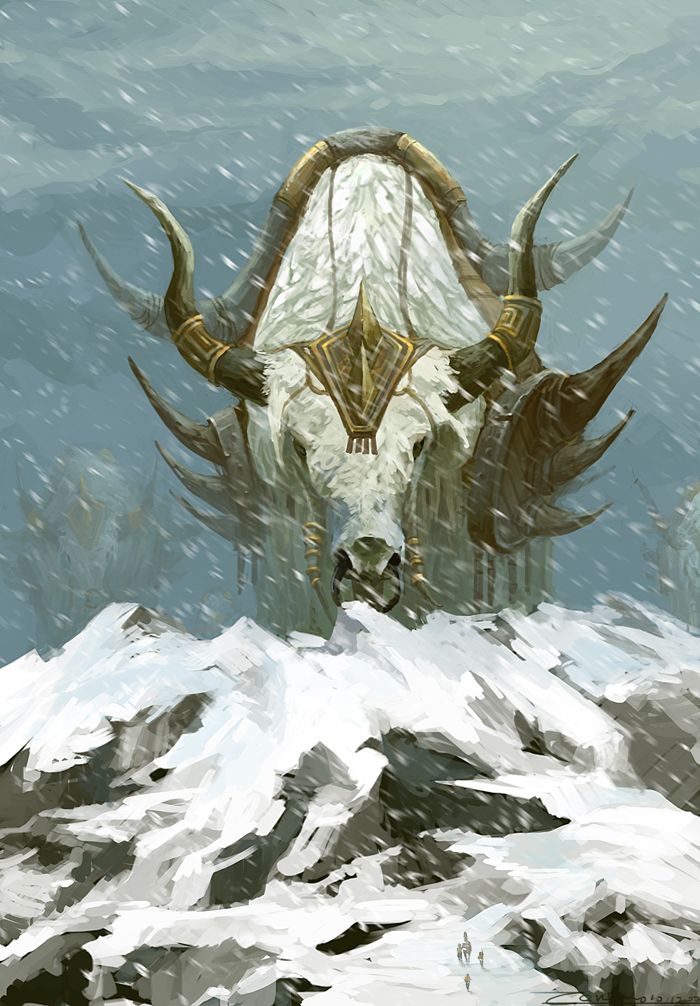