High Chiefdom of the Barok

The High Chiefdom of the Barok sometimes referred to as the Barok Federation is organization best described as a union of Barok tribes that are all ruled by a High Chief.

At the top of the federation stands a High Chief, a member of the nobility elected by the chiefs and serves for a lifetime. His role is to make political and diplomatic decisions and also command the army. Below the High Chief are the chiefs, they control one of the 39 tribes the make up the federation. The rank of chief is hereditary but a younger member of the same dynasty can challenge the heir to a duel in order to get become chief instead. Their role is to elect the High Chief and control rule their tribe.

The Barok Federation has 5 armies under the command of the High Chief with 75,000 soldiers serving in them at all time.

Very little is known about the Barok tribes before the formation of the Empire of Gaeria except for the fact that they seemed to live in the region known as Barokia of Gaeria for a long time.   The Barok tribes were the last province to be added to the empire. Even though their technology was way behind that of the Empire they won a couple of battles due to the mountainous terrain of their homeland and the bravery of their soldiers. After they were conquered they were put under the rule of an Archduke appointed by the emperor and Barokia was proclaimed "The Archduchy of Barokia".   The Archduchy of Barokia was given a lot of autonomy and only had to pay few in taxes. Despite this the different tribes in the region made around 300 recorded attempts to gain their independence, those attempts were rarely made by more than a few tribes at a time, and the Archduke in a lot of cases used other tribes to suppress those uprisings.   In 632 the Archduke at the time Giban of Parma had an idea on how to stop the uprisings, he would make the Baroks feel a connection to the rest of the empire by introducing them to the 'Enlightened Eight' (the pantheon of gods worshipped all across Gaeria), and after they will learn the errors of their heathenistic ways they will convert. He decided to send the charismatic priest Jabal of Manzari to the tribes. Surprisingly Jabal succeded in converting the population and in 30 years all of the tribes were converted, but that didn't stop the Baroks from rebelling. The conversion to the different religion kept the independence movement (that had been dwindling for 100 years) alive, because of a single passage in the 'Book of the Eight' that states that humans have a right for freedom.   In 1244 when the Empire of Gaeria collapsed the tribes gained their freedom but chose not to join the Anti-Jewingaton Coalition. Shortly after the end of the Jewingaton invasion, the Kingdom of Laille saw an opportunity for conquest in the Barok tribes, and in 1251 it declared war on a tribe named Würgzerent the only Barok tribe that wasn't inside Barokia proper. The soldiers of Laille slaughtered and raped the population. Seeing the destruction outside powers a Chief named Gornak Krum decided to take action. He convinced the other Chiefs to crown him as High Chief with the promise that will retake Würgzerent and protect the tribes from invasion. Gornak managed to take Würgzerent and signed a peace treaty with the Kingdom of Laille.   The Barok Federation prospered under Gornak Krum, roads were improved, the army modernized, and a new capital named Nigsteig was built. The Federation stayed mostly out of international politics, until the Gyonan incident in 1411.   In 1411 a carriage from the Kingdom of Afrar carrying Wufdole (a highly addictive drug from the new world) entered the city of Gyonan. The carriage was discovered and stopped by the authorities and it's contents were thrown to the river near the city. After the High Chief heard this he was outraged because drugs (except for alcohol) are considered taboo in Barok society. And he demanded an investigation into the matter. It was discovered that the carriage belonged to a smuggling organization run by lords from Paldara, Druca, Gluig Plen, Estron and Laille. The High Chief demanded punishment but even though Wufdole was highly illegal in all of these countries only Laille punished its lords. The High Chief had enough and on the 19th of Gedeval 1411, the High Chiefdom of the Barok declared war on Paldara, Druca, Gluig Plen and Estron.

Conquest of the Lowlands

For more than 150 years the High Chiefdom of the Barok was in peace, but when it came the time to strike they had no trouble doing so. Conscription was one of the Barokian Army biggest strengths due to the "Blood for Blood" law which states that:

"In the event that the Federation finds itself in war all chiefs need to send youth from their tribe to the army. A chief that would fail to do so will be dethroned and his position of chief will be transferred to whoever holds the position of High Chief permanently."

This resulted in more conscripted men then the army could recruit and as a result, most of them were sent back. Not only did the Federation's army had a lot of men it also knew how to use them effectively. The Federation sent military attachés to many nations through the years, most importantly to Pa'arailia and Paldara in the recent Four Years' War. The lessons learnt were used in training the 1st Federal Army, an elite unit of professional soldiers. These advantages helped them defeat all of their opponents that were still devastated from the Four Years' War. The Baroks conquered Druca, Gluig Plen and Estron within half a year, and managed to take the valuable trading hub of Parma from Paldara but decided to not pus forward with them due to uprisings in the conquered nations.   Most of the uprisings in the Lowlands' purpose was to re-establish the old goverment but the biggest uprising, the one in Gluig Plen was an uprising to bring back the rule of the empire. 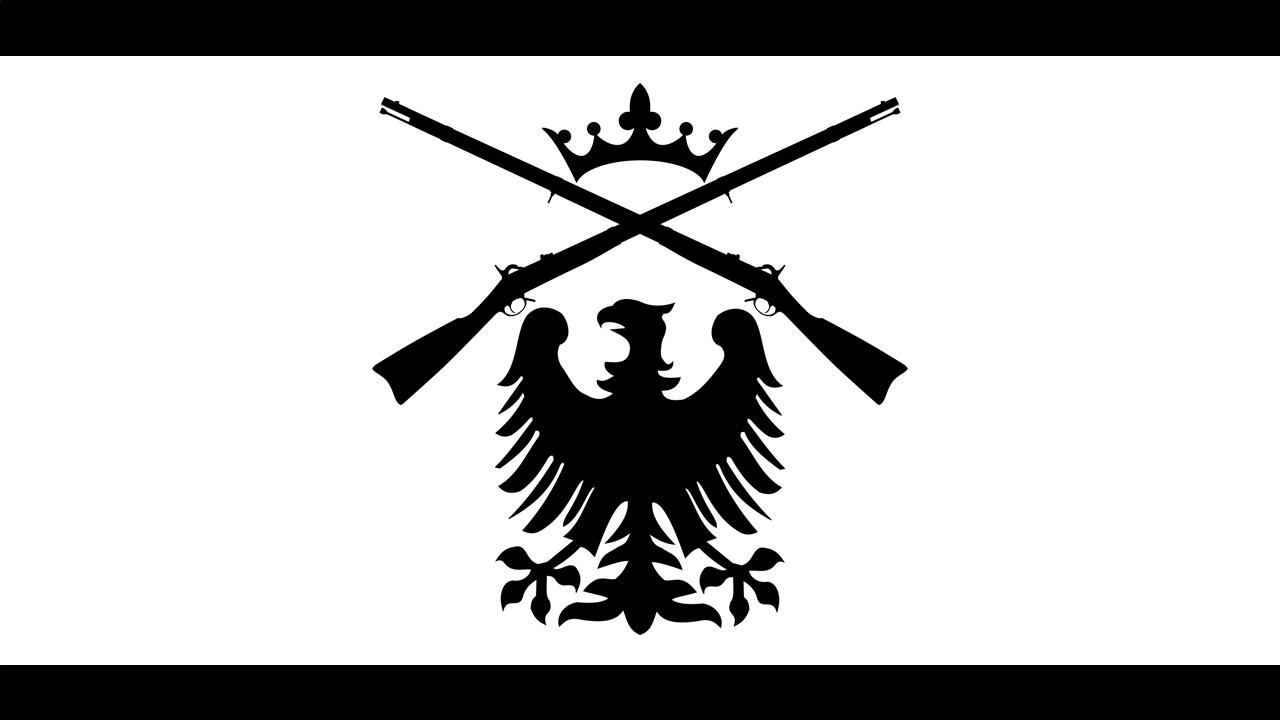 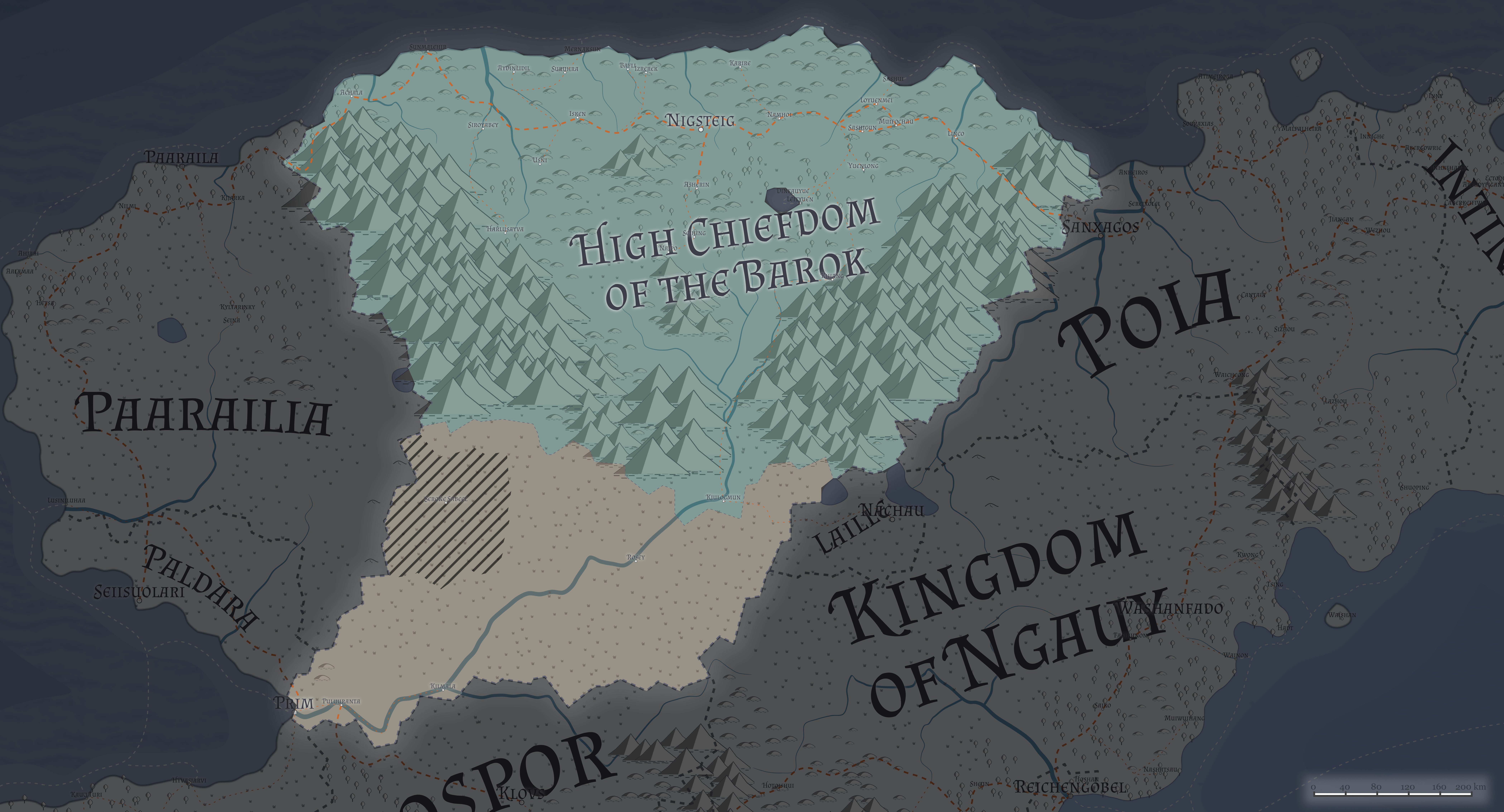 The green zone represents Barokia proper (including Würgzerent), the brown area is the parts that the Barok Federation conquered in the war. The striped parts are in control of the pro imperial rebels.