This medallion is more of a way to access your personal finances, than it is a spendable piece. Pretty much everyone in Potestas, and many around Géfyra, has one on their person. To use the Splinter Medallion, one must simply touch it, and with a bit of will, you can open your account to send or receive payment or even review what finances you have available.

The use of Fiss Shards play such an important roll to Potestas and the world, not to mention that the Medallions themselves would not be possible without them, that it was decided that the currency would have eight denominations which led to the diagram of energies being used as clear sections of the medallions. The denominations themselves are based on what fraction of a percentage of Shezakrazah's hoard that you own. Thus, being both related to Shards and Fractions, the term Splinter was coined and their symbol created. A simple crystal splinter of the color of the denomination.   When wanting to see your available balance, numbers will appear on the medallion over the different colored sections equivalent to the number of that color Splinter you have. When spending or acquiring Splinters, the Medallion will split or combine them into their color equivalent when needed. IE turning 10 Green into 1 Blue.

The city of Potestas is so large that is most times written in a mathematical equation as shorthand. Now add to that all of the other people over Géfyra that also use Splinters. Then, divide a pile of wealth up between all of these people. Not evenly, but based upon owning a portion that is equivalent to the value of what they have put in from their own wealth. We are talking about percentages so small that it would be in comprehensible to use and write regularly, and a hoard of wealth so large that even in its segmented microscopic fraction of the lowest portion this tiniest of denominations is still slightly more valuable than most other countries lowest value of tender.   So instead of writing this percentage out, they take this lowest segment and equate it to the base value of 1 Green Splinter. The other colors just represent multiples of this base value. They are as follows.

The influence that this currency has had on and from culture has been vast. Just it's history should tell you a lot about the significant changes to Potestas since its inception. This more than anything has been one of the key factors in reinvigorating the city.   Besides reviving the economy, and expanding the amount of commerce, this money helped improve moral in a lot of simple ways. Gone were the black and white signs of cost, suddenly color was everywhere. People were constantly reminded of the connection their city had to the world around them by a palm sized piece they carried around, which made them subtly more conscious on how their actions influenced where they lived. The speed and easy of going to the market cut way back on the amount of negativity that was experienced during the average person's day to day, mundane, interactions. Language and understanding slowly stopped being a barrier when wanting to discus value of goods with foreigners.   This was reflected in street art majorly. Now with new elevated emotions, suddenly there was a rise in energetic busking, people getting drawn with brighter expressions, graffiti had become a lot less focused on the oppressive nature of just trying to live.   In some simple ways, people also slowly changed how the currency was used in language and on signs over the years. Over time people stopped asking for 354 splinters, and started adopting the denominations. Instead saying 3 Red a White and 4 Green. Putting the Colored images of the Splinter Symbols on their signs followed by how many of it, instead of just the bland numbers.

"How much for the special?"   "A Blue and two Green."
— Customer buying the lunch special from a random street vendor.

Shortly after Shezakrazah was elected to take over control of Potestas, this was one of the first major changes she instituted. Recognizing the amount of trade that went on throughout the city, and the wide range of people that moved here to take part, she realized that things needed to be a bit more unified. Giving the people a more unified, and easy to use economy would vastly increase the amount of interactions that happened throughout the day. Not only was monetary communications clogging up the flow of commerce, but the old currency of Potestas was unstable. It had been spread too thin over too many people, and the value had volatile fluctuations, causing arguments constantly over what should be paid.
So she tasked one of her best research teams to develop a secure device that could be programmed to function for one specific person, which eventually became the Splinter Medallion, while she went about solving a new way to back the value of their new currency and distribute it. Shezakrazah set out to forge a path, buying lots of land and throughout the megalopolis to erect new buildings and purchasing then combining some of the larger competing banks in the city. This all became the foundation for Unity Bank. She then invested a good 80% of her dragons hoard (all but the items of special value, or high personal significance) as the backbone for the new tender, Splinters.

Having everything in place, she unleashed her plan. Those whose accounts were held by the banks bought out had their savings exchanged over to the new values, and they were each given Medallions to access their accounts. then changed all of her business over to primarily feature the new currency. Others saw how efficient, secure, and easy the new system was and began converting over as well. Before long almost all of Potestas was using Splinter Medallions, and Splinters were declared the official currency of the city-nation.   Being the largest trading port in all of Géfyra, many outsiders started carrying a Medallion while in the city. Word eventually made it back to their home nations and countries. They asked Shezakrazah to help set up small outposts in their capitals, and some trading ports, where currency exchanges could occur for travelers to or from. Slowly these exchange stations were set up all over the globe. While they do not eliminate having to cash out to use the local countries tender, as most folks who stay home bound never have need of it, Splinters have "unintentionally" become well recognized as the money of merchants and travelers. It is said to be unintentional, but some speculate that Shezakrazah planed for this outcome the whole time. 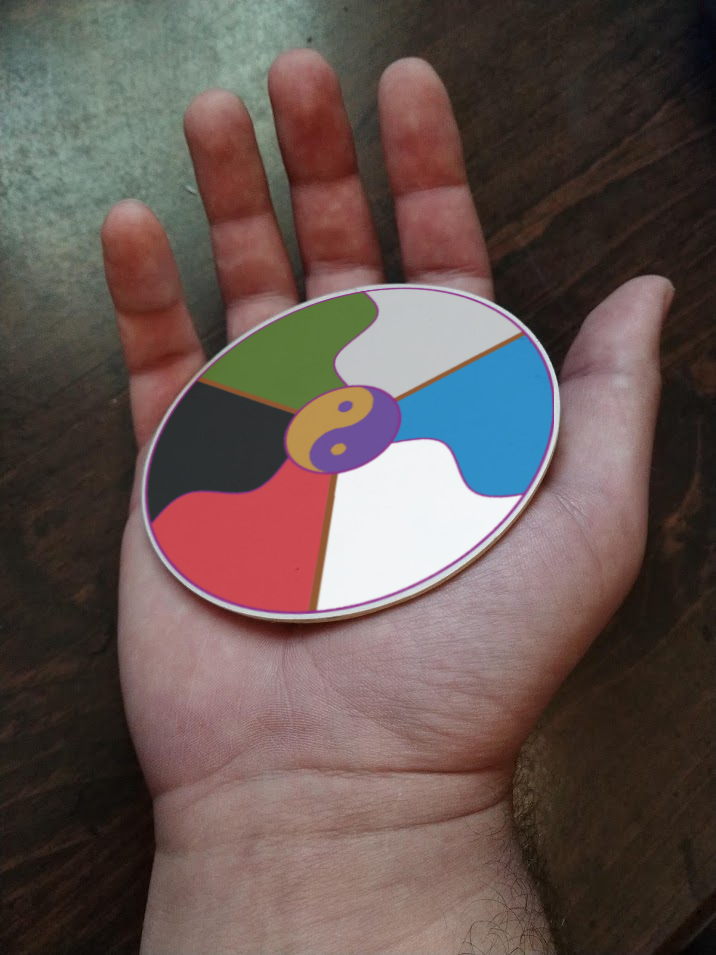 This is a simple example of what a Splinter Medallion would look like.