History of the Currency

Once the United Kingdom had the British Pound. With Inflation and the results of the resource elements of The Great Rewind, the currency and its base changed. What resulted is a new currency called the New Sovereign (singular) or New Sovereigns (plural).

What Is The Currency Base?

The currency base is Integerist (in-tuh-juh-ist (ɪntɪdʒəɪst)) meaning that there are no decimals. The currency works as it would do with normal counting with whole numbers. This has many advantages such as multiplication being easier and calculating costs being simpler. The only disadvantage is when the number is not evenly devisable. Such as dividing 500 New Sovereigns by three, you will get 166.67. Since there is no denomination smaller than five, the solution is often to round down the owing and give the difference to one person. This person changes each time to make it fair. It is often the host who pays the difference.

Where are the Coins Minted

Coins are minted in Zone 3, in cities that have mints. They are required to produce a percentage of coins that they need to make the currency strong. If the percentage decreases, they cease production otherwise the currency will lose its value. If the percentage falls to zero, the machines will be maintained and repaired. This is not to say that the machines are not maintained or repaired, it is done at the end of each day.

The currency consists of only coins. To save on resources the currency is made out of nickel. The denominations are; 5, 10, 25, 50, 100 and 250. There are no denominations of 1 or 2. What is noteworthy about the coins is that as the dominations go up so does the size of the coin. The smallest coin is about the same size as a two-pound coin (28.4mm or 1.12 inches). While the largest is 50.8mm (2 inches). They are sized as to not be lost. On the edge of the coin is reading, or ridges, so the coin can’t be scratched for metal scraps or be easily counterfeited. 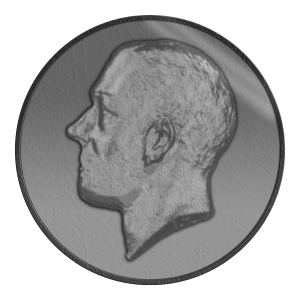 by Blue or Box 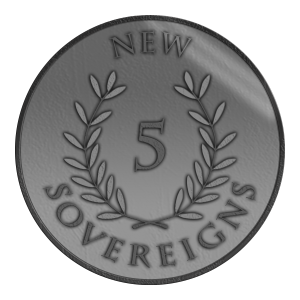 by Blue or Box

The heads side of the coin has a profile of a male face facing left and embossed. No one truly knows who it is. It is rumoured that the person is the current reigning monarch but with no way of checking, the citizens have no real way to be sure.

On the tails side of the coin, it has laurel leaves to either side of the denomination. In the centre at the 12 o’clock position is the word “New” and at the 6 “Sovereigns”.

Does It Have A Specific Symbol It Uses?

The symbol for the New Sovereign currency is NS. It doesn’t really have a complex symbol like the Dollar or the Pound. This is mainly because it would require a new character in printing to allow for the new symbol. To make it easier for the printing industry they opt for the simpler option of putting NS.
Conversion Table

I really like the thought you put into this it makes the coinage seem real which is what you want. I see some great things in your future. Keep on writing.

Interesting article. I wonder if there are any forgeries of the coins and how the mints protect against them