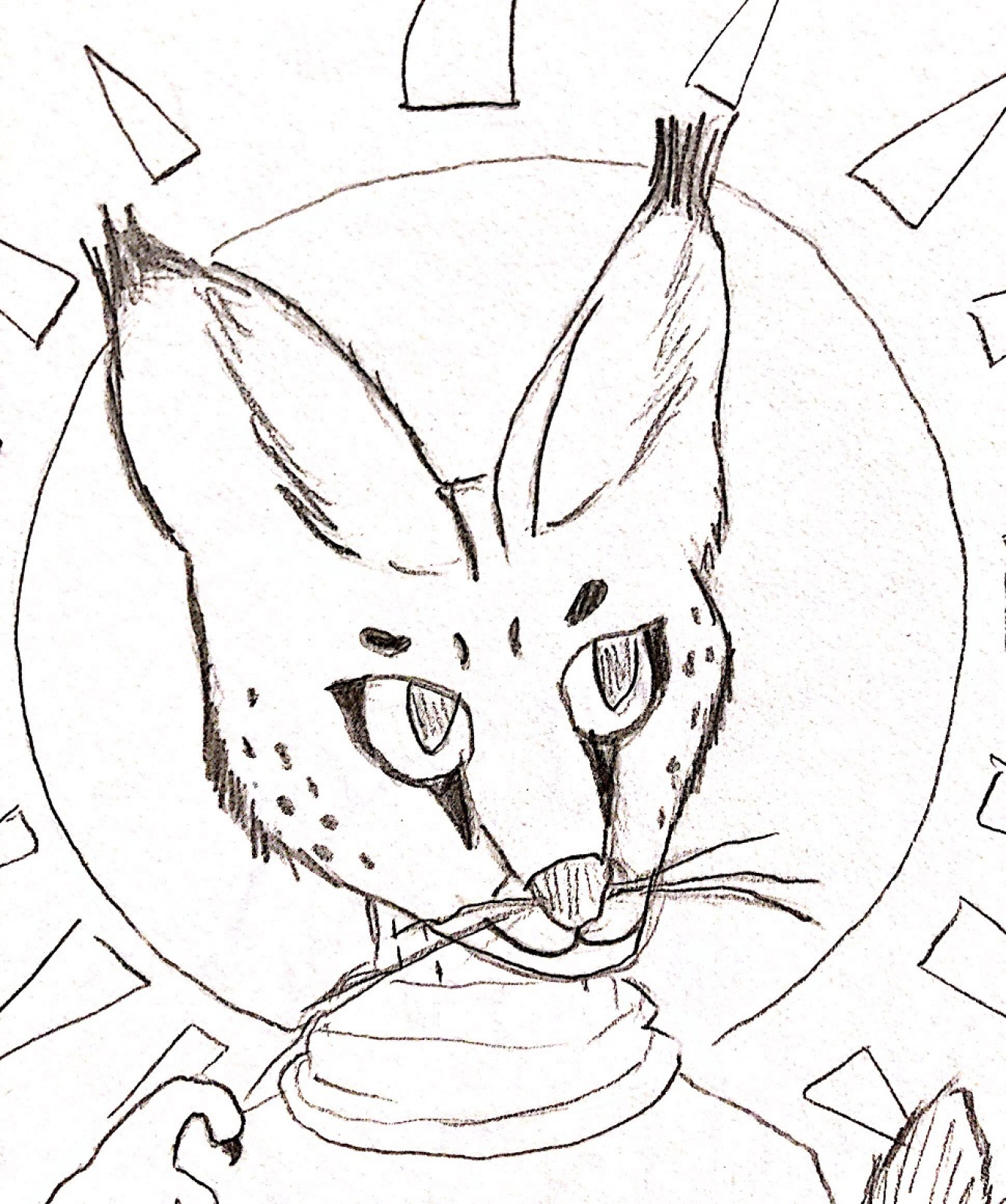 You are Frithitt, the last and best of my creation.

The sole sapient species native to the planet Frith, Frithitt are an urbane and literate species with an old and storied past. Though now nearly extinct in the wake of the cataclysm that befell their home planet, this compendium will seek to chart their history in its fullness to preserve it for all the ages to come. Find below an introduction to the Frithitt species, so as to provide outsiders with the most accurate possible image of this story's chief players.

A feline species of upright and noble bearing, observers from Earth would find Frithitt to be visually similar to the African serval in many respects. Their large ears and spotted pelts particularly resemble this species, but there the similarities largely end. Frithitt are bipeds, standing on two long, digitigrade legs. They are unusual among felines for having grasping hands with four “fingers”, claws which can sheath, and pads on their palms and fingertips. Like all vertebrates from Frith, the vertebrae of the Frithitt splits in twain at the base of the spinal column, giving them two tails.   Frithitt have expressive faces with relatively short snouts for felines. Though they lack proper lips as humans understand them, their mouths are somewhat more flexible than those of their non-sapient relatives, permitting them to use more complex phonemes and smile, among other things. Their eyes are large, and often blink or narrow to aid in expression. As well as their usual spots, one very prominent marking rests on the brow over each eye to allow further non-verbal communication. As well as these, movements of the ears, whiskers, hands, and tails also allow Frithitt to express themselves.   Frithitt are covered in fur just like all felines. Though smooth and glossy, when rubbed the wrong way the fur is fairly coarse. This is an adaptation for Frith’s dry climate. The color of their pelts ranges all the way from a ghostly pale tan that’s almost white or cream, to a dark sable, with various shades of gold, tawny, and brown in between. Their eyes can be a number of shades, including greens, yellows, blues and oranges. Very rarely, silver or deep gold eyes may manifest. Eye and pelt color vary depending on ethnicity, as do height, ear size, and other visible features.   Frithitt are roughly human-sized in height, standing on average between 165 and 185 centimeters at the crowns of their heads. Frithitt are sexually dimorphic to a degree. Humans would understand that “males” tend to be larger than “females”, with more robust builds, wider faces, and smaller eyes. Frithitt would probably not treat this dichotomy seriously, however, as culturally they have three genders and not two, which tend to be treated independently of physical/sexual characteristics. Frithitt have no visible breasts like humans do.   Frithitt are limber and flexible. They are capable of extraordinary horizontal and vertical leaps, and have impeccable balance. Their sight and hearing both far exceed human capabilities, but are slightly below average for felines. They see the color spectrum differently from humans and cannot distinguish red from yellow. Frithitt can be expected to live about a century on average and reach physical maturity at the same age that humans do.

Frithitt are obligate carnivores. Although they can digest certain plant matter and sometimes consume it for medicinal purposes, it carries little nutritional value for them. Red meats tend to serve Frithitt nutritional needs the best. All adult Frithitt are lactose intolerant.

Frithitt names, following the conventions of the siFrithitt language, contain a lot of harsh, unvoiced fricative noises (k, t, s most prominently). Last names are known as "clannames" and are decided upon naming if the parents happen to be of different clans. It is common (but not universal) for given names to transliterate into English as being five characters long; however, clannames universally follow this rule.

Frithitt society traditionally has three genders: male, female, and even. Evens are so named because in classical Frithitt culture, it was said that something of both the sun and the moons was in these people. These genders are typically not expected to line up with a Frithitt's actual sexual morphology, leading to a civilization by and large accepting of what humans would call transgender people. Gender roles themselves varied depending on culture, time, or place, but by the end of Frithitt civilization full gender equality was the norm.

Frithitt are typically expected to have two mates, no more and no fewer. These trios of Frithitt are exclusive and straying outside of this structure, or infidelity, is looked down upon. It is not unheard of for Frithitt to choose to keep only one mate, nor for them to decide to keep more, though both of these states are considered a little odd. Frithitt society is tolerant of homosexuality.

By the 21st millennium and the end of their civilization, Frithitt had achieved a low-scarcity economic system, faster-than-light space travel, had colonized numerous distant star systems, and had even mastered the tricky craft of converting pure energy into matter.

The most widely-spoken and official language of Frithitt civilization was siFrithitt. This is part of Frith's largest language family, whose traditional territory spanned from south of the Sea of Salifin to the Vale of Krratin in the east. As an Overlight dialect, siFrithitt supplanted the other Overlight dialects of its territory early in history and eventually all across the planet. It was also adopted by the Underdark Frithitt much later, albeit unwillingly in many cases. Non-siFrithitt languages persisted up to the end of Frith's civilization only in the Underdark, while some older off-world colonies had their own peculiar dialects.

Frithitt favor loose clothing, and particularly garments best suited to resist dry and dusty habitats. Shifts, robes, and tunics are common, as are dresses among high society. Frithitt clothing must be made to accommodate their two tails comfortably. There is no taboo against going bare-chested or shirtless among Frithitt, owing to their lack of visible breasts.

Frith's first felids emerged from small, carnivoran ancestors around 25 million years ago. Ecologically marginal compared with the long-successful dromaeosaurs, big jungle cats like our jaguars or tigers simply never had a chance to evolve on Frith. The planet's earliest felines were, like our fisher cats and ocelots, small and cryptic hunters of forests and canyons. Many of these cats became arboreal over time to thrive in the thick forests that proliferated at the equator during much of the mid-late Cenozoic. The first felines with grasping arms (vaguely resembling feline versions of the siamang) emerged around 10 million years ago, with some eventually adapting for bipedality by 7.8 million years ago. Numerous proto-Frithitt species of slightly lesser bipedal capability and cognitive power populated much of the planet's western hemisphere, and were outcompeted by anatomically modern Frithitt once they emerged about 2.85 million years ago. By 100,000 BFA, Frithitt had populated nearly all habitable areas of planet Frith.   Spreading at first along canyons and waterways in the Underdark, the colonization of the planet's higher elevations, which came a little later, marked the beginnings of the dark-pelted Overlight Frithitt race. In many places over the ages, tensions between the Underdark and Overlight Frithitt would be a recurring source of class antagonism. A little over 20,000 years before the present, writing made its advent among the Frithitt, marking the beginning of recorded history. Disunited as a species for much of history, the Frithitt finally unified and experienced a thousand-year period of prosperity and interstellar expansion before their civilization's destruction.

In their long history as an interstellar species, the Frithitt have encountered numerous other sapient species on other planets. A self-centered species assured of its own importance in the cosmos, the relationship between Frithitt and these aliens has always been a little prickly at best. Other species tend to find Frithitt arrogant and haughty.
Scientific Name
Felidae
Conservation Status
Except for eight exceptional survivors, Frithitt are gone from the universe.