The glassblowers of Frit have lived most of their lives as humble tradespeople. Their entrancing work stirs up enough demand in the nearby city to keep a steady trade, providing for their families and allowing for their retirement when they choose to hang up their didymium goggles. Most of their youngest generation is happy to continue in their footsteps. However, a few with a knack for business are itching to expand.   The newly-formed Frit Tourism Board sees the potential in their blissful little hometown. Of course, the export of arcane foci, potion bottles, and trinkets is enough to live on… but the silica sand of the swamp gleams with inherent magic. And that can be made into an advantage.   So the city council of Frit was persuaded to open its warehouses and processing kilns to the curious public. As more and more people make the day trip to the town (convinced by the barkers that were conspicuously placed at the most bustling street corners of the city), it is becoming the summer’s most trendy spot to see and be seen.

Safety is paramount for a craft like theirs, even more so with the flocking tourists now underfoot. Before the addition of magic, the outdoor kilns can reach 3,000 degrees. The native swamp alligators provide the perfect leather for the aprons and gloves that guard their hands. Alligator skin boots with reinforced soles are the prized possession of most craftsmen, waterproof enough to work in the outdoor exhibition arenas and sturdy enough to protect their feet from errant shards of glass and gouts of flame.   Their trademark purple glasses are polarized with a didymium filter to block out damaging flares of the kiln. Knockoffs are available in the giftshop, and are quickly becoming a fashionable accessory for the summer.   Masks protect their lungs from glass filings and fumes, but those aren't the most important cloths on their bodies. Their white bandanas are splattered with the overflow and mistakes of their projects. Every craftsperson wears their personal bandana to rags as a testament to their hard work. To have a pristine white bandana is to never make a mistake. Less than a dozen Frittish craftspeople have maintained a white bandana at the time of their deaths, and so were buried with them.   Their thin cotton shirts and pants are dyed in bright colors so they could be seen from anywhere in the village. The preferred color is orange, with the dye from a centuries-old recipe made from the twisting vinelike roots of the trees that sink into the water. Purples, reds, and grays are also common, but never unlucky yellow. Very few Frittish glassworks are made in yellow, preferring their other organic tones.

Woes for the Show

The Tourism Board had a “few suggestions” when the Glassworks Tours opened. The old uniforms were a little dowdy to be on the front page of the newsletter. Just a few tweaks, they promised. Nothing major. Like the removal of back pockets from the uniform to "smooth out the silhouette," and the dyeing of the facemask to "complete the color story" because the old bandanas are "unpredictable."   The current goggles aren't as protective as they once were. The previous wraparound model was "closed off" and “separated the audience from the show.” The sideshields and adjustable straps were removed in favor of larger lenses and glasses chains. This has led to an increase in "Frittish freckles" - tiny circular burns at the temples where the glasses no longer protect the skin from flying molten glass, or the heat of the glasses chain leaving a red burn.   The yellow gold is considered bad luck. Not only does it have a lower melting point than iron from which their previous goggles were made, the color yellow is associated with occasional dangerous sodium flares from the kiln. Many grumbles were made at the town council meeting that approved the “logo” of the city, a cursive F with a glassblower’s bubble at the bottom of the letter, glittering in gold. Somehow, those against the change were outvoted. 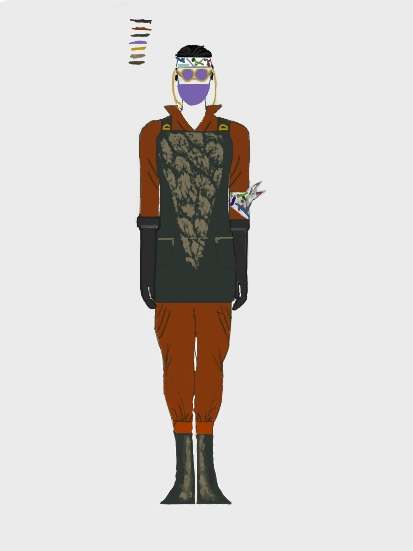 Great article! I love the idea of focusing on glassblowers :D   The idea around the white bandanas is great! What happens if one of the bandanna get too damaged to still be worn though? Do the glassblower get to wear a new one?   I love the influence of the tourists company and the changes they forced everyone to make, an d the details about the freckles. And their insistance on gold :p The explanation about the sodium flares making them hate yellow is a great idea :D   I don't know if it's me, but do you only have two images or three? I have a symbol for an unloaded images below the glassblower's uniform, just before the image title, and reloading the page doesn't change anything.

Nice article! It is a interesting concept to work magic into the glassblowing. Opening the kilns to tourists is quite the smart idea . A shame though how many useless changes they had to make to the uniform because of it. :p The image you added is pretty nice as well.   The white bandana is a nice addition as well. I like how the more mistakes someone makes the less pristine it becomes. I wonder though from what moment they start counting mistakes since I assume that even those most skilled ones had to learn at some point as well.

Typical appearances are more important than actual safety... I swear... -_- Anyway, I like the old outfit and the way it's all about safety. *spits at those that forced the new one through*