If we are terribly honest, we don't even want you to be alive. We only kept your kind because we need our sustenance. Your devotion. Your cries. Your pain every time you face a challenge. Do you have any idea how suffering it is to listen to your woes? Even the most ridiculous of woes of losing a spouse? You, humans, can't stand having a bit of challenge and then whine as if you're the victim in the first place!

Frantumare is a world of high fantasy where Humans are forced to co-exist with Feras, humanoids with animalistic features. The world is greatly divided after the Dark Calamity that ravages the surface and the awakening of the Ashen Blights, creatures born from Ashes that mysteriously fall after the calamity. Remnants of the Old Kingdom of Laevenon is re-established to become the main Human Kingdom and renamed Strigea: Beacon of Humanity. Followed with the creation of the Holy City Qadena, and the richest city in Frantumare, Adescheid.   Feras are forced to live primitively, despite owning the two-thirds of the world. Humans continue to exploit the Feras, through blackmails, threats and murders. Deliberately dividing the Feras to be at war with each other and coerce them to forge alliance with the Humans. 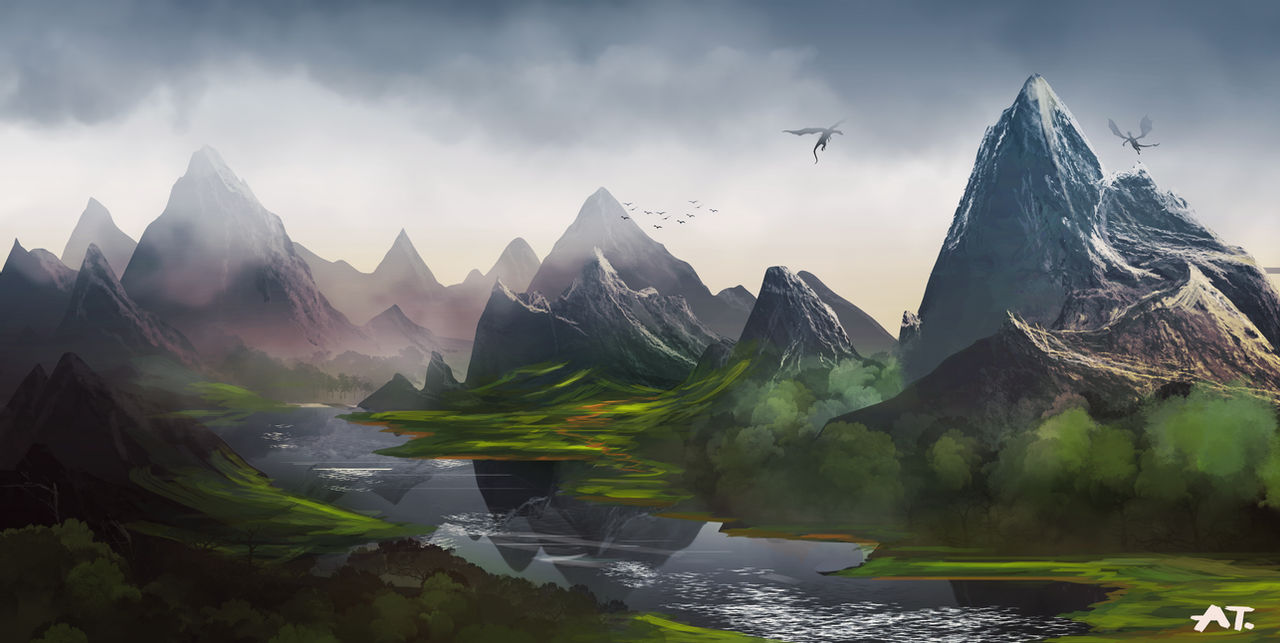 by Fullmetal-Angelo
Contrary to the war, Frantumare is rich with variety of biomes to explore. From the coldest north of Soucriant to the lush valleys of Haint and forest of Easlane. One can find the Tobitokage ready to bond with new tamers in the islands of Kazan, or the zealous devotees of the Qadani in the Holy City of Qadena to their goddess.

The faith of the Fera towards the gods dwindled the more suffering is inflicted upon them. The majority turned into Ikke-Troende, and left their faiths behind to pursue pure survival. Meanwhile, the Humans embraced the faiths, created religions and spread them throughout Frantumare. Qadena is then established as the Holy City, and overzealous teachers preached to the Feras to the point of executing them publicly should they refuse their teaching.   This only created more rifts between the Feras and Humans, and the Feras' hatred towards the gods grew immensely, be it the Lysis or the Securus. This is the exact opposite for the Lysis, as they are more fond and attached to the Feras than to Humans.   The gods, mainly Lysis, heavily despised Humans for their destructive behavior. They openly condemns them, but needs the Humans for their sustenance. Suffice to say, they are only important to the Lysis as their source of power rather as their "beloved" children. This is also due to the Lysis do not have the Power of Destruction like the Securus. Meanwhile, the Securus toys with both Feras and Humans and often lends a hand to either side in guised of the Lysis, except that there are price to be paid.   Humans are unaware of this betrayal, but sometimes, ignorance is a bliss they cannot always afford.

As if Frantumare has not suffered enough in the hands of Humans, the world is plagued with the Ashen Blights, beings that are born from the Ashes. The Ashen Blights were once people, consumed by the Ashes and cursed to wander on Frantumare for eternity until the Void claims them. Their biology is similar to those Feras and Humans, however, their transformation depends on their origins.   If an Ashen Blight was a Human, their form will be bipedal, mindless and slow. They become docile as Ashen Blights and are often used as experiment subjects to study the transformation. However, their lifespan is too short as they will die within 24 hours of captivity. Their blood is Ashen Black color. They are called Ashtomi. 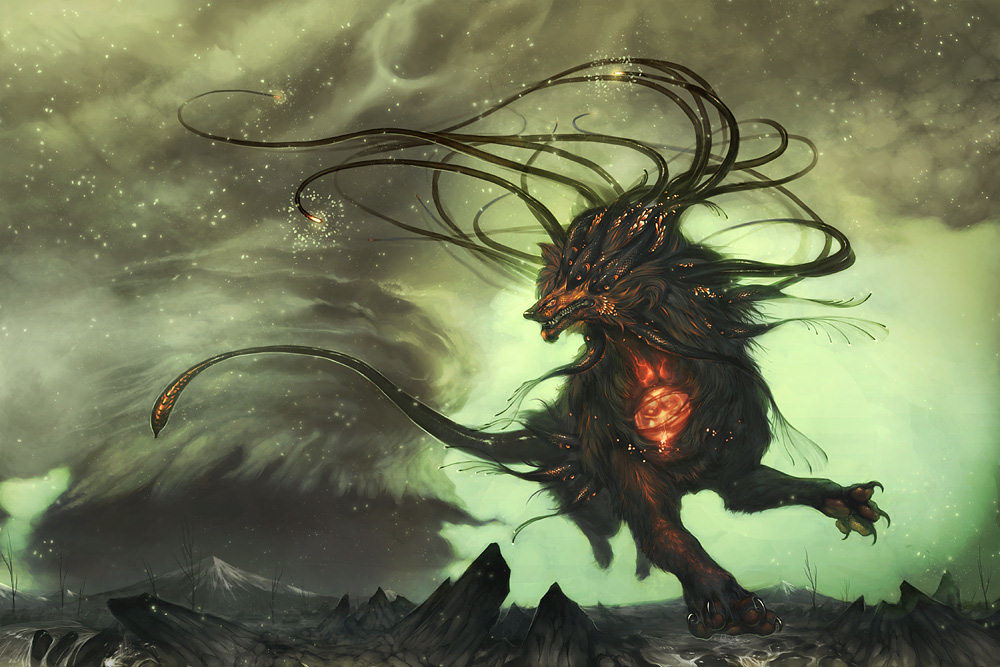 Kill or Be Killed

Frantumare has turned into a cruel world where survival is important than anything else. It is a dog eat dog world, mistrust is spreading and murders are fairly common. Sometimes the only way to protect yourself is to kill another. Other times, it is best to be apathetic and avoid attachment in any way possible. Frantumare finds death to be amusing, wars as games of chess, and cries as music.

The one thing the gods can share with Frantumare, is that they refuse to let go. The gods hold onto the fractured peace from the old world by creating a new world in its place, disregarding the fact that remnants of destruction would follow in the shape of the All-Father. The gods hatred towards the Humans, the bane of their beloved old world Maerus, is so great that they refused to lend a hand to them when they asked for help. Despite their devotion, the gods turned blind eye towards their suffering.

Sometimes when you live on the pedestal for far too long and too proud, you forget that you are but a mere mortal. This is what most Humans failed to realize in Frantumare. No matter how high your status, how great your magic or health is, Death will always crawl to your doorstep and claim your life. Humans are too arrogant to realize or see, but that's what makes it so easy to claim lives. They were not meant to see Death, after all.

Eye for an Eye

If you kill someone, then expect to be killed in return. That is what the characters in Frantumare will face, as every action they make will have their consequences, whether good or bad. Everyone gets something in return and should not whine when they faced the same thing as what they had inflicted on the other. Sometimes the consequences can be far greater than what they caused. If you burn a farm, expect your home and your family to be burnt. If you kill someone's lover... well, you love the world, do you?

This has been the third re-work of my world. Previously named Memoria, I have rebooted at least twice under the same name before I decided to switch it entirely into Frantumare with a darker tone. I found out that a happy, light world is not meant for me and switching it has made me progress significantly into its lore and characters. I am glad with this newfound groundwork of Frantumare.   In Memoria, the concept was "what if there is a group of people that can control memories and use them as their magic?". I was excited with the idea since memories is not often used as part of a magic system. It was also an inspiration from my roleplaying sessions with my friend who also helped me developed the idea. I genuinely had fun with it, but I was too ambitious. Bulldozing my way through the concept without thinking how it will affect my world, lore and stories. There were too many holes to patch, weak characterization and the story was going nowhere despite the premise. So I decided to scratch that, and came up with a new concept.   What if humans are the root of destruction and evil and thus, forsaken by the gods?   Since I was a child, I always have the thought that Humans are evil creatures and are mistakes existing on the world. I often thought that maybe god didn't create us but it was the devil. But a child I was, it was a fleeting thought but nowadays seems so relevant that I decided to make it into a world where Humans continue to lay waste without remorse, destroying each other while still believe the gods love them for what they do.   Thus, Frantumare is born. A shattered world waiting for the pieces to be lost in the Void by Humans once more. The gods biding their time for the next Dark Calamity while the devils are claiming souls after souls like picking fruits from an orchard. I guess I like to play with the concept that evil gets what they deserve even though in the most brutal way.   I will be putting up more Trigger Warnings on this world as I work on the lore. I realize not everyone may stomach Frantumare, nor what the Humans would do to this world.   They are the Children of Devil, after all...

I love the direction you are taking this. It makes so much sense for your world. I hope this gives you more inspiration. I am, looking forward to reading more about your world. XOX