In ancient times, when the people cried for mercy for help to defeat Fezzeret and his fiendish children, 6 gods arrived. 4 of them aligned with a natural element- Ignea, Marus, Aereon, Terras; and the last 2 Elios and Lyra hailed from a world of day and night. They were twins, two sides of the same coin, and while their philosophies differed greatly, their way of helping the people of 4 Corners were very, very, similar.   Elios, the god of light, along with 15 of the greatest leaders from his land created the 15 Sacred Weapons of The Forge. The greatest minds and warriors from Elios' home agreed to sacrifice their physical forms to be encased within 15 swords. These 15 who made the sacrifice were known as the Solarum or Devum. Some would also simply call them angels. The bearers of 4 Corners who were worthy enough to bond with these weapons would go on to create the Order of the Scarlet Knights. They represented the world Elios came from; a world that was led by justice and mercy, the pursuit of light and hope, and the charge to be the bearer of those principles wherever their travels would take them.   The Scarlet Knights initially served as military leaders in the wars against Fezzeret and fiends. They were light-bringers, hope bearers, and they could rally soldiers to muster the last threads of morale even when the outlook was grim. Even after the Fall of Fezzeret, the Scarlet Knights would be called to help establish and train other military forces across the 4 Corners, using Elios' 4 Pillars of Light as the basis for other soldiering groups and establishments.   The names of the 15 Swords are:   When not called to war or to assist training others in the arts of war, The Scarlet Knights are expected to wander and travel. They answer the calls to action when necessary, and perform the duties expected of them when called to any number of cities or towns. Along with being warriors, the Scarlet Knights bear the burden of Justice and perform the duties and actions related to the custom.   Justice was a tradition that was carried over from Elios' world into 4 Corners and was the standing judiciary practice until each of the 4 Corners established their own laws and practices. The Scarlet Knight along with the Bonded blade served as judge, jury, and executioner for the accused, and they were expected to use their extensive training as well as the Blade's supernatural sense to decide whether the accused party was guilty or not and whether their crimes were deserving of the punishment of Justice or deserving the relief of Mercy. If the accused is found to be innocent or guilty of crimes but there was no ill will or malice behind the crime, then they are granted Mercy and are free to go. However, if the accused is found to be guilty and the intent behind the crimes is full of anger and evil, Justice is then rendered as the Blade falls.   Over time, the practice of Justice was found to be both barbaric and meddling in the affairs of the written laws of the 4 Corners, however, it is still in the law of every land that should a person stand accused of crimes, they may always request to be tried by Justice instead of by the law of the land they are accused in.   In modern-day, the Scarlet Knights still travel land looking to perform good deeds and hear the crimes of the accused when requested. They are seen as antiques of society, however, and their practices old fashioned and archaic. Yet, with the rise of Narne and her armies rapidly taking over land in the Eastern Corner, there is a call for the Scarlet Knights to take on their original purpose and lead a united 4 Corners in the battle against her. But, the Corners are far from being ready to take her on just yet. 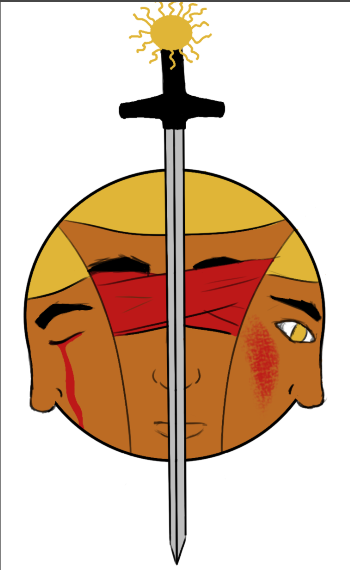