Light is an extremely cheerful Goliath born to one of the most prestigious families of Foraminis (though he keeps this a secret). Early on he was sent to learn at one of the foremost Paladin schools(?). There his seniors quickly learned 2 things about Light: he's a masochist, and he cannot handle a weapon. At one point he was sent out on a mission to deal with a cursed artifact, which ends up on him. The cursed spirit within tried to overtake his body by torturing him, but him being a masochist, he just enjoyed it. So the evil spirit was foiled and still lives on in Light's body trying to overtake it. The paladin academy had enough of Light's shenanigans, and they "graduated" him as a reward for completing the mission. He has been trying to find an adventuring party since. 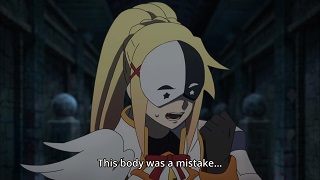