Zsumakshi is a young and ambitious Yuan-Ti Pureblood Warlock. Possessing a silver tongue, Zsumakshi is a captivating speaker, and has rarely had difficulty talking his way way into and out of situations to his own ends.

Zsumakshi is tall and lithe. While far from physically imposing, there is a sinuous grace to which he holds himself that belies an inner strength.

As is the case for many Yuan-ti Purebloods, Zsumakshi looks largely as a human would, but has scaley features on his arms and around his face. He also has an unnaturally ashen skin tone that would be quite pale for a human.

Zsumakshi has narrow, angular facial features that lend him a classically handsome appearance. Despite his serpentine features, he has little difficulty turning up his natural charisma to charm with his looks just as well as his words.   As with his other Yuan-ti Pureblood kin, despite his humanoid features, Zsumakshi has a forked tongue and snake-like teeth and eyes. When inspected closely, his ashen skin reveals itself to actually have a pale, scaley texture consistent with a Snake's skin.   However, unlike many Yuan-ti purebloods, Zsumakshi has some more strongly serpentine features. With minimal effort, Zsumakshi can dislocate his jaw as a snake could, lending a terrifying addition to his otherwise handsome face.

Snake-like eyes, fangs, and forked tongue. Has the rare ability to dislocate his jaw as a Snake would.

Has Physical tics wherein he often slicks back his hair and steeples his hands.

Wears a form-fitting long coat that he keeps meticulously neat and buttoned up. Underneath, he wears a tight-fitting buttoned shirt and slim-but comfortable trousers. The material is high-quality and well suited for adventuring.   He wears an ornate dagger on his belt that is more ceremonial than functional.

Zsumakshi was hatched and raised amongst his fellow Yuan-Ti. As a pureblood he was of the weaker caste, and often looked down upon by the Halfbloods and Abominations above him. While he was raised to accept his lot in their society and to provide services for his betters, Zsumakshi was never satisfied and sought advancement of his station whenever he could.   Despite being blessed with slight more serpentine features than the average pureblood that should have given him a higher station in Yuan-Ti society, his features were seen as a disadvantage. His unique appearance would make it more difficult for him to fit into Human society as a spy or liason. Due to these circumtances, Zsumakshi was seen as neither a strong asset amongst the purebloods, nor worthy of the half-bloods.   Feeling relatively outcast from his own society, Zsumakshi turned to the dark forces to seek the power he so desperately craved. His ambition and desperation attracted the attention of servents of the God of Death Nerull. In exchange for but a taste of his power, Nerull has tasked Zsumakshi to use his natural talents to infiltrate the ranks of the followers of Wee Jas, to keep close tabs on the lesser God.

Zsumakshi has little need or desire for romantic relationships, but has otherwise no preference in his sexual partners. He is perfectly willing to seduce anyone if it will further his goals.

As a Yuan-Ti, Zsumakshi has a natural intelligence that was bolstered through his education. He was trained alongside his other Purebloods to be eduacted diplomatic liasons and spies.   He is well trained in persuasion and deception, and has at least a basic understanding of many cultures.

Zsumakshi has left the service of his people to follow the path of Nerull in search of power.

Despite his outward self-assurance and ambition, Zsumakshi does harbor a deep resentment over his treatment by his fellow Yuan-Ti. His anger over this can lead him to lash out unwisely when he perceives that he's being judged as lesser in some way.

While no academic or great intellect, Yuan Ti Purebloods are naturally clever and because of his training as a Liason and Spy, Zsumakshi has a keen mind for details and information.

Zsumakshi has little concerns for morality as it relates to other people. He is solely interested in pursuing his own lust of power, and will perform in whatever way is ncessary to achieve his goals.

Zsumakshi desires power and recognition above all things. His current motivation is to discover information about Wee Jas's presence in Foraminis to report to Nerull in exchange for power. 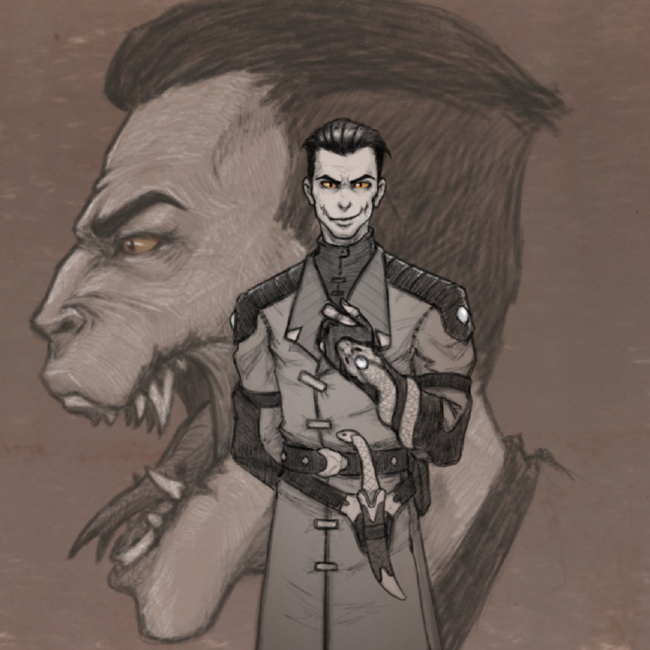