"At least the two of us don't need healing!"
— Valna Mellerelel

Okrim Lawbringer (born 23 Mirtul 1464) is a protector aasimar cleric of Helm and member of the Ardent's Beta Team. Okrim displays particular aptitude with fire-based magic, but sometimes finds himself unable to control his powers.

Okrim is fairly tall and can be described as lanky, but overall healthy. His strength is fairly average, but he has slightly above average dexterity.

Owing to his being an aasimar, Okrim's body lacks any marks or blemishes. He's also fairly pale overall. The one exception to his lack of blemishes is his lower arms and hands, which are scarred from old burns.

Okrim's face is stoic, with firm features and an angular chin. His hair is naturally blonde, and he prefers to wear it between his neck and shoulders. His eyes are red, identifying his celestial heritage. Like the rest of his skin, his face is fairly pale, and is untouched by blemishes or birthmarks. At a height of 6'1'', Okrim is taller than average, but his average weight of 150 pounds means he's fairly lean and lanky.

Okrim was born in 1464 DR under the light of a red star in the town of Triboar, to a human mother. His eyes glowed white with flecks of red contained within - a telltale mark of an Aasimar. His mother died giving birth to him, and his father is unknown. Due to this, the followers of Helm took him in and raised him. Okrim displayed a strong talent for divine magic from an early age, but despite the best training from the priests of Helm, he could never fully control his abilities. In 1481 DR, he departed from his home to explore the world.   Soon after, he became an advisor to a minor lord in religious matters. However, for reasons unknown to him, his fire-based magic spontaneously activates. Okrim discovered this at the worst possible time - when he was holding his lord's newborn son. The infant survived, albeit with a handprint burned onto his face. Okrim, however, barely escaped from the enraged lord and his entourage with his life. After drifting across the Sword Coast for two years, Okrim decided to sign up with the Ardent, which had just formed in the Ardeep Forest.   Following the events of the Battle of Menzoberranzan, Okrim stayed with the Ardent to teach new recruits in magic and healing.

Having grown up with the clergy of Helm, Okrim is fairly well educated compared to the average person. His specialty is religion, especially Helm. He also knows a fair amount of the history of Helm, as well as his home town of Triboar. Another thing Okrim is well educated in is non-magical healing and medicine, anatomy, and healing. Between his wanderings around the Sword Coast and learning from the ranger Valna Mellerelel, he has also gained some profciency in survival skills.

Okrim's first 'job' was that of a cleric of Helm, a position he retains to this day. After he decided to strike out into the world, he found employment as a healer and advisor to a minor noble in Waterdeep. However, after he was forced to flee from the lord following the scarring of his son, Okrim found little in the way of odd jobs for two years. Eventually, he signed up with the Ardent as a mercenary/adventurer.

Okrim feels guilt over his accidental burning of Lord Draxus' son while watching over him. He believes that if he was more careful, he could have avoided the incident and harming the child.

Okrim's personal philosophy can essentially be broken down into three pillars: serve the public, protect the innocent, and uphold the law. He interprets this morality through the lens of the guidance of Helm, whose church stresses the importance of following orders and never betraying trust bestowed upon the individual.

Outside of his home town of Triboar, Okrim has little in the way of contacts or friends. He knows several people in Waterdeep, but nobody particularly important. Within the Ardent, however, he enjoys the company of his companions in Beta Team. He doesn't particularly like the leader of Alpha Team, Rhogar Mystan, but doesn't mind the team itself. Okrim also has a crush on Nathxena Fey, who he has worked with several times.

As he was raised by priests of Helm, Okrim follows a fairly orthodox view of the religion. He will almost always follow lawful orders, and refuses to betray the trust bestowed upon him by others. He also feels comfortable relying on others during conflicts, especially trained soldiers.

Okrim is usually reserved in social situations, preferring the company of books to people. Despite this, he displays a quiet confidence in himself and his abilities. When made to talk, his manner of speaking is fairly blunt, saying things without prettying them up. He also avoids lying as much as possible, and in fact views this as a point of pride.

Preferring to avoid social encounters, Okrim uses his books to hide in and stay away from other people. When surrounded by familiar faces or forced to talk, he enjoys making jokes. 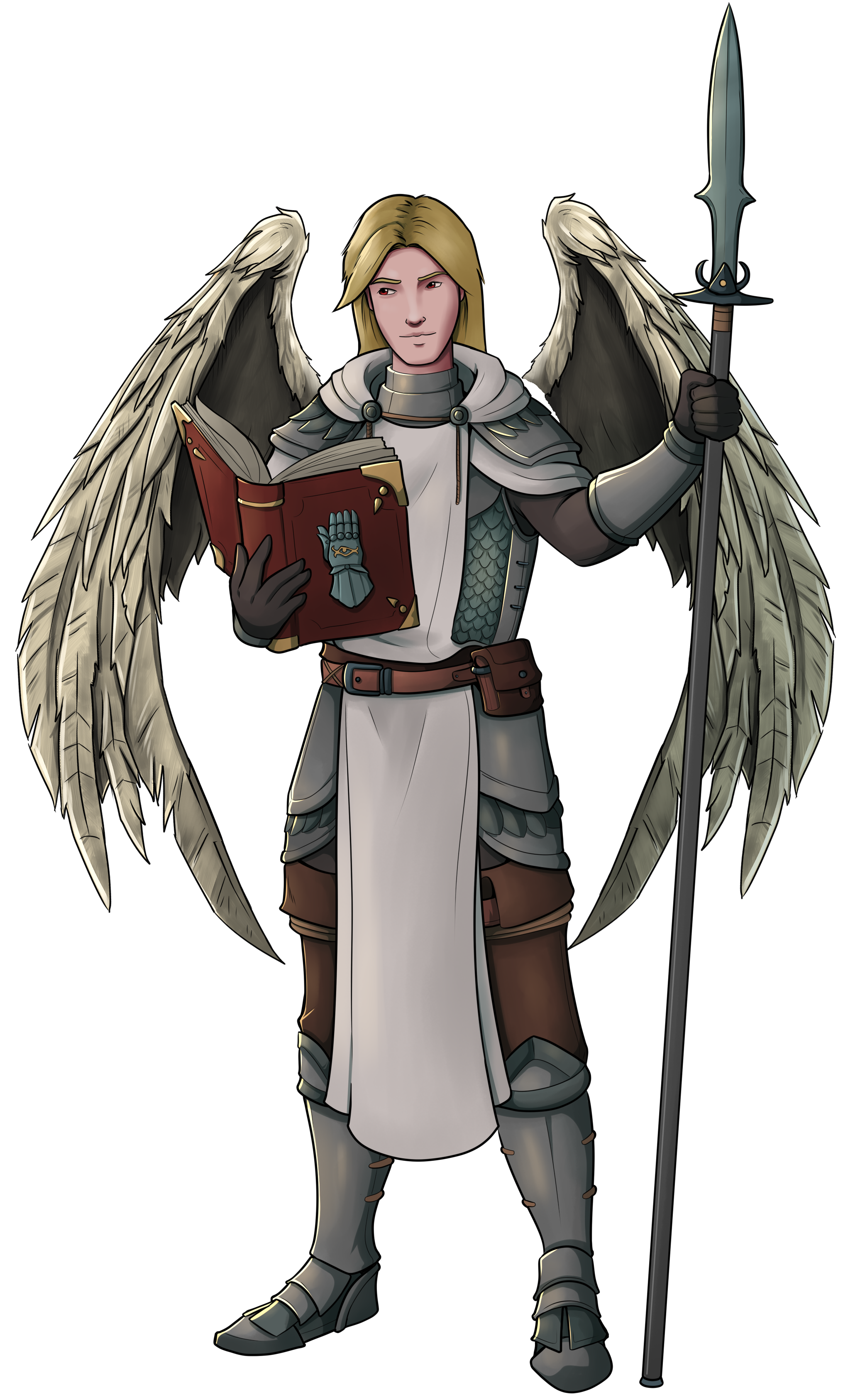 Turn Undead (2/day). Okrim presents his holy symbol and speaks a prayer censuring the undead. Each undead that can see or hear him within 30 feet of him must make a Wisdom saving throw. If the creature fails its saving throw, it is turned for 1 minute or until it takes any damage. A turned creature must spend its turns trying to move as far away from Okrim as it can, and can't willingly move to a space within 30 feet of him. It also can't take reactions. For its action, it can use only the Dash action or try to escape from an effect that prevents it from moving. If there's nowhere to move, the creature can use the dodge action.
When an undead of challenge rating 3 or lower fails its saving throw against Turn Undead, it is instantly destroyed.
Radiant Soul (1/day). Okrim unleashes his divine energy, causing his eyes to glimmer and two luminous, incorporeal wings to sprout from his back. His transformation lasts for one minute or until he ends it as a bonus action. During it, he has a flying speed of 30 feet, and once on each of his turns, he can deal extra 15 radiant damage to one target when he deals damage to it with an attack or a spell.