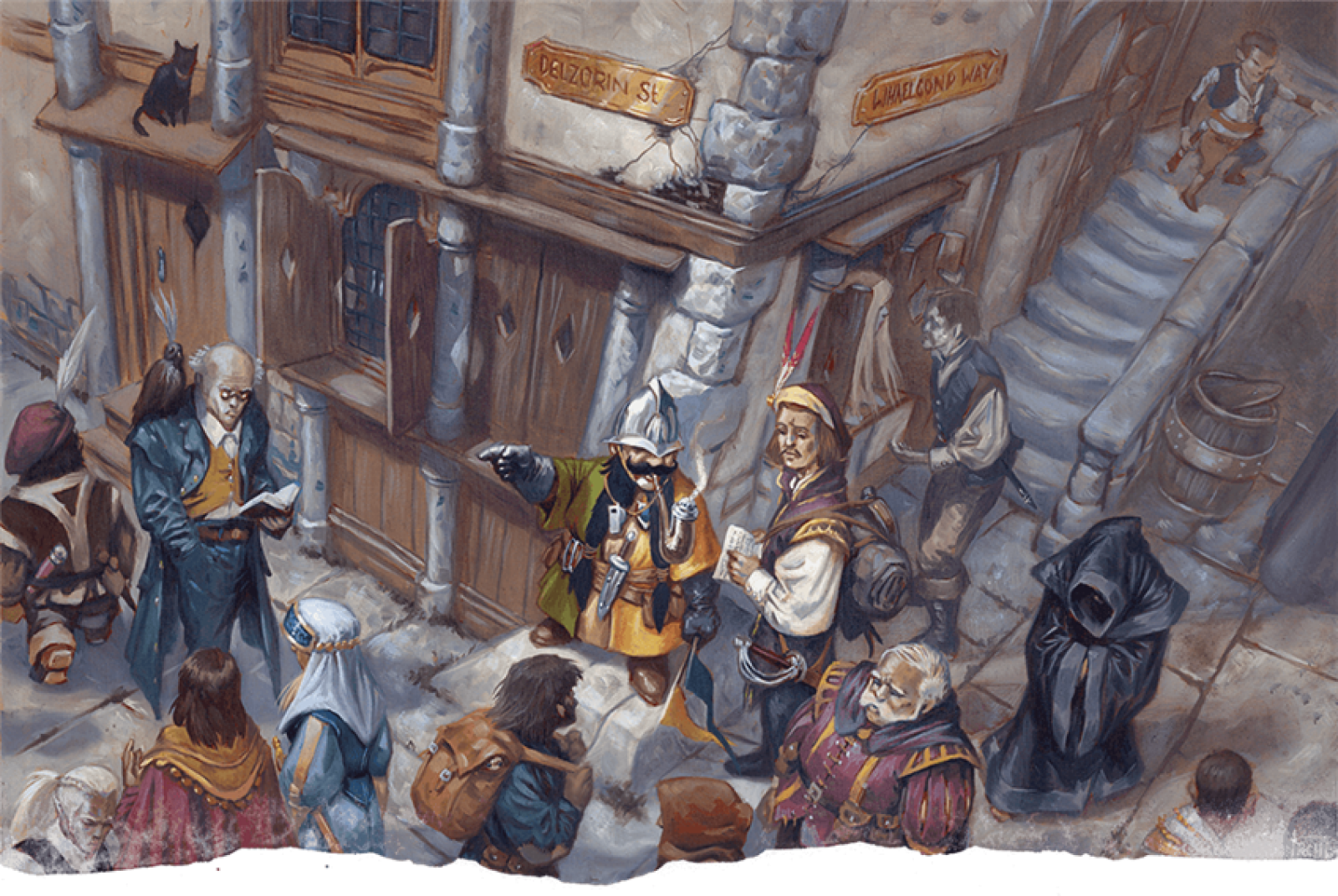 When you want weapons, armor, arcane assistance, or just want a barrel full of alchemist fire this is the place to go. Located in the eastern section of the Trade Ward near the City of the Dead is the Grand Maul, the one stop shop for all adventuring equipment. It naturally sprang up from a number of different shops catering to adventurers forming an alliance. They created a sort of trade guild to settle disputes between them, organize recourses, and act as a lobby.

The humorously named Grand Maul, a play on the term Grand Mall meaning a collection of shops, is a long street covered in brightly covered awnings. The various shops and stalls all peddle their wears to the passing adventures with colorful slogans and grand offers. The amount of things you can find here are only matched by the verity of adventurers who buy them. Anything can be found at the Maul even things no sane person would want, like Giff mercenaries.

The amount of powerful magic sold here has lead to the creation of an entirely new guard post just for the Maul, with a permanent staff of City Guard. The crime rate in the Maul is also nothing to scoff at, thieves and pickpockets prowl the streets hoping to nab a shiny peace of loot off a naïve adventurer. It is said that, like the guard, The Xanathar Guild has a entire branch dedicated to the Maul.

Another form of security in the Maul are the iconic Beetles. Clad in suits and bowler hats they patrol the street stopping petty crimes and minor threats. But do not mistake them for a glorified City Watch. Each one is highly trained and well armed. They carry longswords, collatable shields, and Bracelets of Hold Person to apprehend criminals. Some say they are even stronger than the Guard, although that's still up for debate.

So when in need of magic and might go to the Maul, you might just find it.
Notable Shops
>Jepetto Joybuzz's fine Toys and Clockwork. Owned and run by the tinker gnome Jepetto Joybuzz this shop sells intrecatly crafted toys and clockwork figurines. Also wrist mounted crossbows and retractable daggers.
>Seelana Enuvus' Potions and Remedies. The premiere seller of all forms of healing potions, medicinal salves, and healing tea. It is run by a kindly old wood elf who does not like how much danger the adventurers get themselves in, so she opened a shop to help.
>Ghutuk Gore Chopper Choppas. You want axes he has axes. Founded and operated by the orc Ghutuk Gore Chopper this store is a seller of fine hand crafted axes.
Type
Shopping mall / Commercial Complex
Notable Rules
With how much weird stuff happens at the Maul it is no surprise that a number of downright bazar rules have been instituted at the bazaar. Here are some.
>No running more than twenty cockatrice down the street at a time.
>Mind flayers are allowed in the Maul as long as they don't bring any thralls of intellect devourers, and stay under watch by the Beetles.
>All shops have the right to refuse serves if they suspect a customer is possessed by a malevolent entity, non malevolent entities are fine.
>Physical manifestations of gods are not exempt from fines for holding up traffic.
"Ah the Maul I love this place. It is so convent to have one place to do your Suneday shopping. Hm I think that there is a new shop that sells acid, note to self buy more acid. Wait why am I buying the acid. Help go buy acid!"
"Yes sir, what kind"
"Caustic! He HE HE Hehehe"

Remove these ads. Join the Worldbuilders Guild
In response to the prompt Write about a shop, in or tavern that its name is a pun