On 4 July 1187 Salah ad-Din inflicted a devastating defeat on the Kingdom of Jerusalem at the Horns of Hattin, near the Sea of Galilee, capturing or killing most of the Crusader forces. The battle instigated calls in Europe for a new Crusade.

Raynald de Chatillon, Prince of Antioch, broke the truce between Salah ad-Din and the Crusader States by attacking a Muslim caravan. Salah ad-Din swore to kill Raynald, and sent his son al-Afdal and his general Emir Gokbori to raid lands near the Crusader-held port of Acre.   In May the Knights Templar under the command of Grand Master Gerard de Ridefort attacked Gokbori's forces at Cresson, near Nazareth. The Templars were defeated, losing 150 knights and 300 footsoldiers.   In July, Salah ad-Din laid siege to Tiberias, where Raynald's wife was trapped. Guy de Lusignan, King of Jerusalem, decided to take Tamplar advice to attack Salah ad-Din's forces, though both Raynald and the Knights Hospitaller advised caution. Guy left only a few knights to defend Jerusalem under the command of Balian d'Ibelin, and mustered 20,000 men, including 1,200 knights, at Saphorie in Galilee.

The crusader forces advanced with the True Cross, the Kingdom of Jerusalem's most sacred relic, from the Springs of Saphorie towards Tiberias on July 3, constantly harrassed by Muslim archers. The springs at Turan were insufficient to water the Crusader army, and realising they could not reach Tiberias by nightfall, Guy diverted the army to the springs of Kafr Hattin, six miles away.   Salah ad-Din, who had assembled a force of up to 40,000 troops, positioned his army between the crusaders and the springs, forcing them to camp on an arid plateau. Muslim forces kept the crusaders awake overnight by banging drums and chanting, and set fire to the dry grass to force the crusaders to breath smokey air.   Raynald and Gerard advised Guy to form battle lines and attack but the crusaders were blinded by smoke and their advance was ragged. Raymond, Count of Tripoli, in command of the first line of battle, managed to break through the Muslim forces to the lake at Tiberias, and flee to Tyre. The crusader infantry - some 15,000 troops - broke and fled to the Horns of Hattin, where many were killed on the spot and others captured and enslaved.   The remaining crusader knights and mounted sergeants fought on, but they were surrounded and despite three desperate charges, were broken and defeated. Only 200 knights survived.

Guy and many barons of Jerusalem were captured, as was the True Cross. The military power of the Kingdom of Jerusalem was broken. Salah ad-Din invited Guy and Raynard to his tent, offering Guy a drink. Guy passed the cup to Raynard, but Salah ad-Din struck the cup from Raynard's hand, drew his sword and killed him as he had promised to do several months earlier.   Salah ad-Din sent both Guy and the True Cross to Damascus. He ordered the captured barons be treated humanely, but ordered that all captured Templars and Hospitallers and turcopoles be beheaded except the Grand Master of the Temple. The captured barons were eventually ransomed, with King Guy released in 1188.

Although Salah ad-Din's forces also took heavy casualties, the crusaders had reduced the garrisons of nearly all their towns and castles to field their army. By mid-September Salah ad-Din's forces had taken 52 castles and otwns, including Acre, Nablus, Jaffa, Toron, Sidon, Beirut, and Ascalon. Only Tyre and Jerusalem held out. Salah ad-Din laid siege to both. Jerusalem, commanded by Queen Sybilla, Patriarch Heraclius, and Balian d'Ibelin, fell on on October 2 1187.   Pope Urban III died of shock when he heard of the defeat at Hattin and the fall of the Kingdom of Jerusalem. His successor, Pope Gregory VIII, called for a new crusade to retake Jerusalem.
Start Date
4 July 1187
Conflict Result
Ayyubid victory 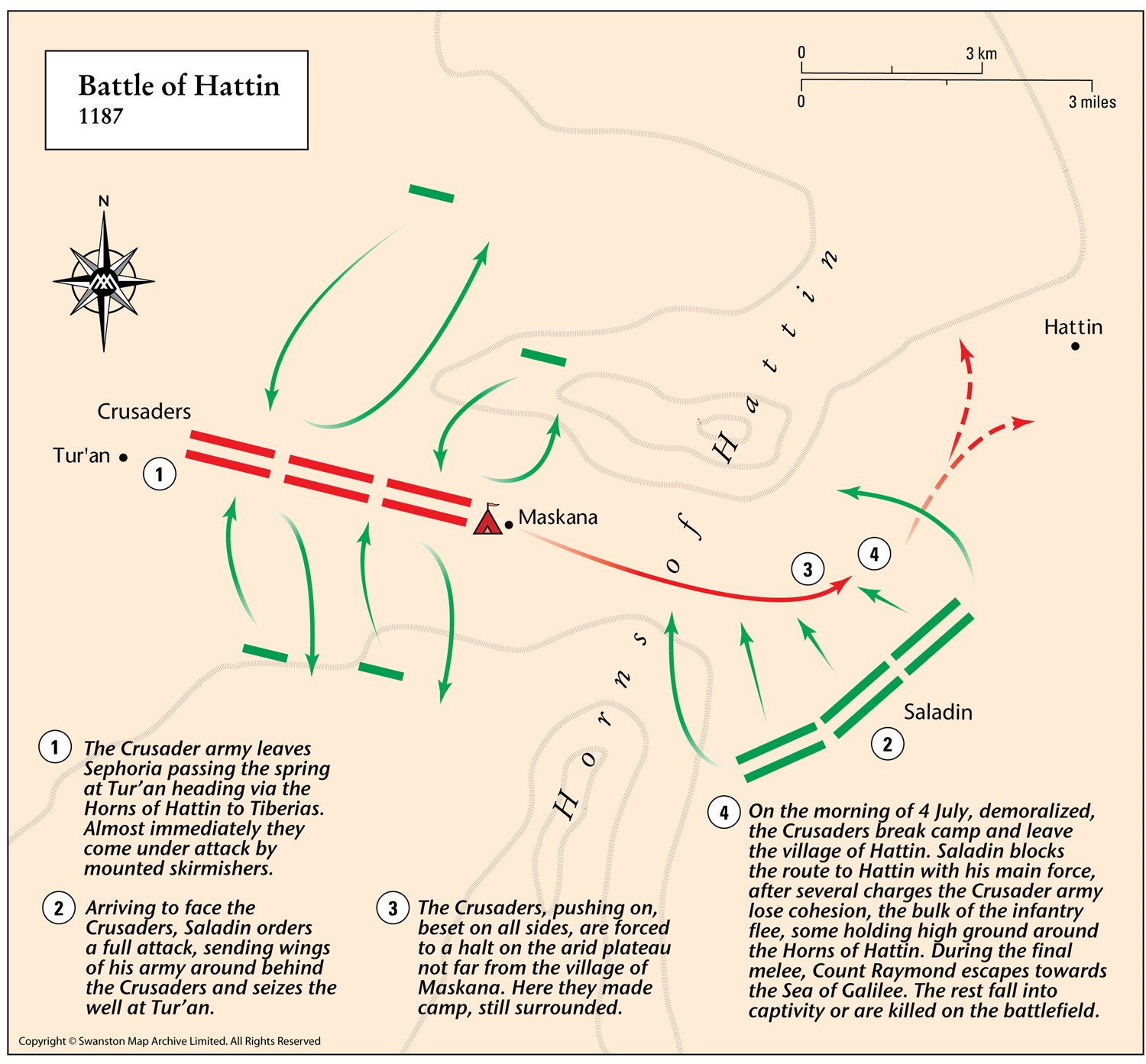 Considerable
Most of the army, with 1,000 knights killed or captured.