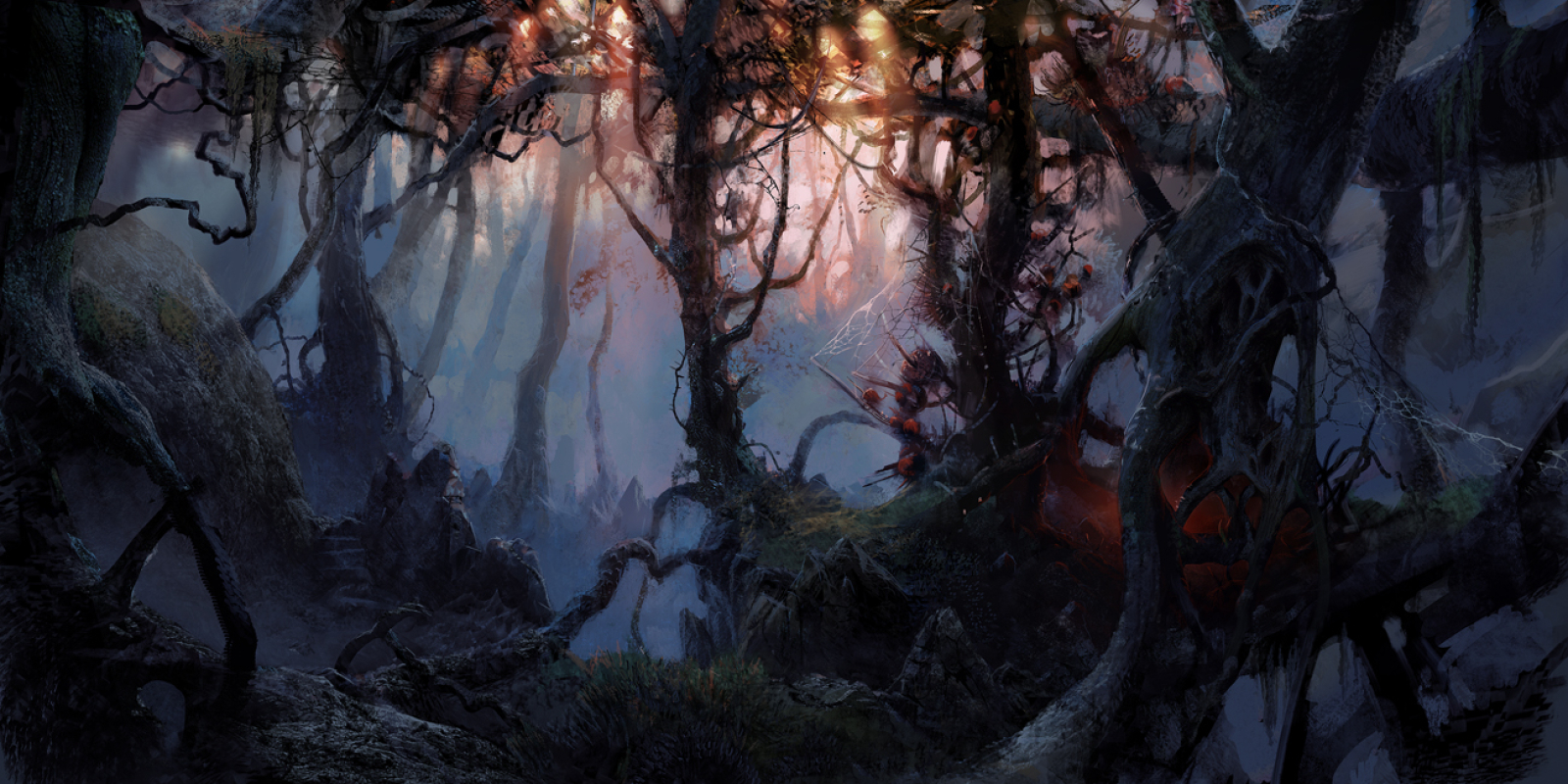 If you venture to the northeast of Estoya , you will encounter a hostile environment known as The Black March. This region is known for its vast size, horrific flora and fauna, pestilence, and denizens who are often just as brutal and rough as the landscape in which they live.

The region consists of three distinct biomes that bleed into one another along their borders. On the outer edge of the region on all sides, you will find dense forests.

The border shared by The Black Marsh and Estoya is referred to as The Wailing Wood and is considered the official point where The Black March begins.

When one leaves The Tablwood and enters the much denser and dark forest of The Wailing wood, they will be met by sounds that are alien and often disturbing. The Wailing Oaks are a species of invasive flora that make up a large portion of the trees located in The Wailing Wood.

These trees are known for their shrieking or wailing, sounding like horrified screams and weeping depending on if the Oak is in a passive or aggressive state. These trees are remarkably invasive to the point of pushing out other flora and fauna of the forest. The Wailing wood has few if any examples of fauna, and other species of flora that survive tend to be small and weak due to insufficient nutrients in the soil.

The flora and fauna within these regions are aggressive and primarily carnivorous. Trees that grow and thrive in these regions have developed traits that allow them to gain their energy through other means. the sun does not often shine in The Black March, and the soil is lacking in nutrition. Plant life is barren of leaves and fruit, though pods of seeds have been seen growing on their naked limbs.

Consider it a clear warning when you see any flora tempting you with fruit or leaves. It is likely that these are toxic, or carry diseases that kill anything that eats it. Angry Couples are a form of flora that actively hunts and kills any who come to close.

Universal Melancholia, while found in various regions, originated and is found in its highest abundance within the borders of The Black March. Melancholia is one of the many ailments that plagued the world, Universal Maladies. Melancholia literally strips the world of color the further within its influence one goes. The closer you are to its point of origin, the more gray the world becomes.

Melancholia spreads like a fungus throughout every region it exists in. Black particles that function like spores float in the air, capable of moving great distances with the breeze. Inhaling the spores can cause many psychological problems while one remains within the malady's influence. Melancholia functions as its own biome within The March. It has its own examples of twisted fauna and corrupted flora that are entirely unique to it.

The Taken of The Void

Flora and fauna that originates in Melancholia, though it is not known by anyone in the world at the time of Expedition Demeter's departure, are The Taken Of The Void. The Taken are mutated by a form of Melancholia's physical presence. There are Fountains of Woe littered throughout that spew forth a viscous black ichor. It infects all biological matter it touches. Infection not only leads to the eventual death, but mutates the body. This makes one ideal for use by unseen forces within the void.

The taken are resilient but mindless without the influence of their unseen master. Each member of the taken is unique and it is impossible to classify taken with the world's current form of taxonomy. The only common factors include horrific appearances, a constant growth and release of Melancholia spores designed to further spread the malady to new regions, and a perseverance that allows the entities to shrug off even the most crippling of wounds.

A land of death

The black March is often referred to as a dying land. This is primarily due to the fact that undead creatures exist in great abundance within its borders. To die within The March is a terrible fate. If Melancholia or its many manifestations don't kill you, the people living within seldom offer a better death.

There are a select few who chose to live in these horrid places. The Black March is free from the prying eyes of governments and the troublesome forces of the law. 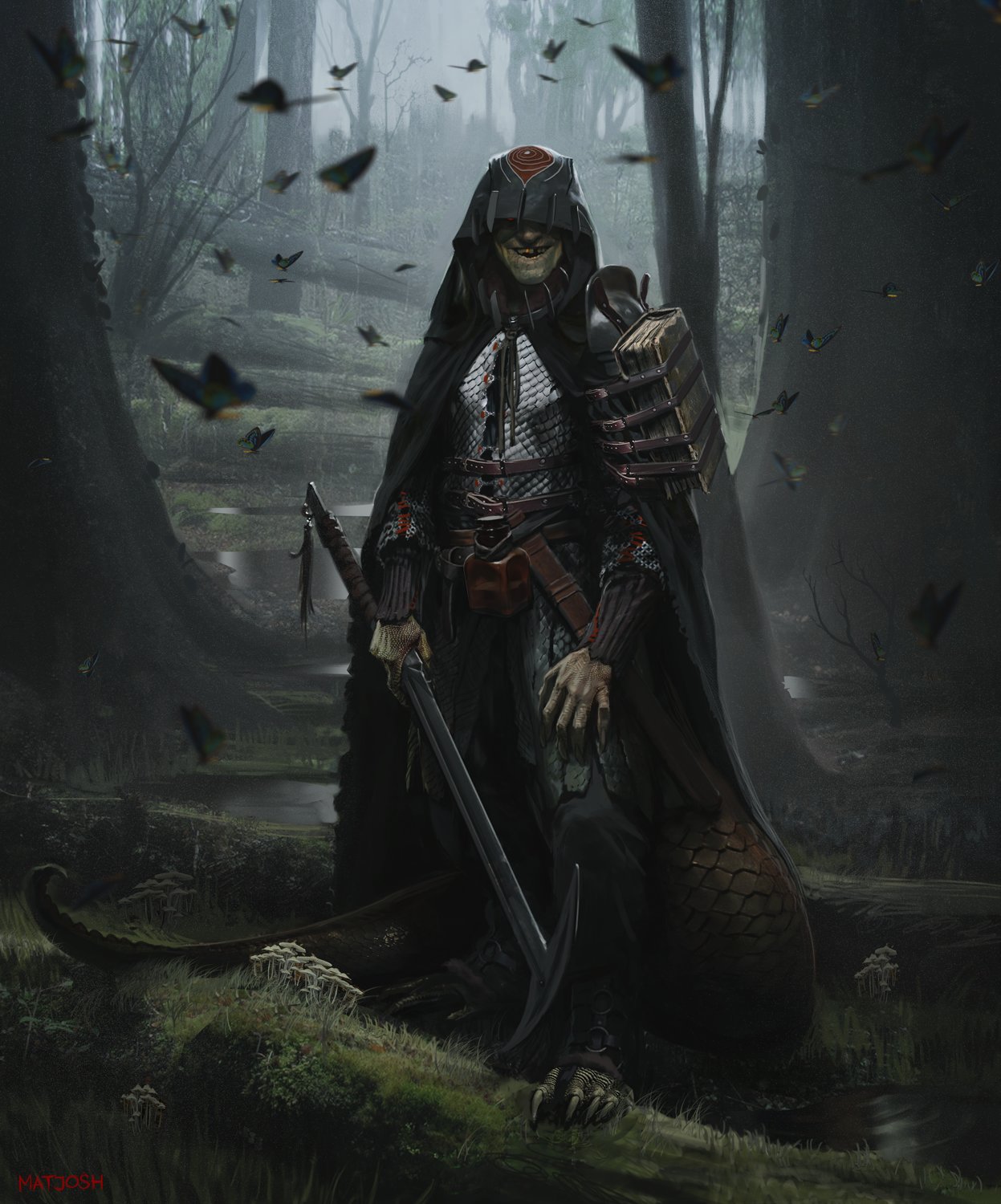 
Well there are a select few homesteads that have found a way to survive in this harsh environment, there is a singular culture that travels within the regions of The Black March. There is a cult dedicated to Myrmidian, a corrupted elven goddess. The cult makes their home in the trees of the Wailing Oaks. The Wailing Oaks are migratory, traveling across the forest of the black March depending on the season.

The cult is populated by Wild Elves though anyone of any race who find themselves in their dark goddesses embrace are welcome among them. The vast majority of their time is spent in the Wailing Wood, but many travel further inland choosing to take the fight to Melancholia directly. They travel the swamps on remarkably sturdy stilts that make them appear like the monsters themselves. They carry weapons specifically designed to take down significantly larger creatures, and hunt down the Taken of the Void to prevent the spread of Melancholia.

The Estoyan Government maintains an ethically questionable alliance with this cult. As long as the cult does not spread their influence further south and maintains their current effort to combat Melancholia, the will remain a secret from the population. No effort to control them or stop their various practices are made.

The cult is known for cannibalism as well as a great many other forms of devious atrocities performed in the name of Myrmidian. Individuals who stray too far often find themselves within their grasp. The Wailing Wood is technically within the borders of Estoya, but since the cult maintains its own sovereignty, the wood is just as often considered a part of The Black March.

When looking at such a horrifying place, it is easy to believe a simple truth. To live in such a horrifying place, one must be just as horrifying. The black March does not have many people living within it apart from The Children of Myrmidian. There are some who have found ways to survive with its borders but their numbers are less than 100. There are no settlements within the region, only scattered plots of land worked on by those who have been made brutal by the horrible world they find themselves in.

Most of these individuals have fled other regions as refugees and fugitives from Justice. Pyromancers fleeing persecution from The Provinces of Mhirriah, Arcanists and Druids who fell to dark practices and The Dread Powers, murderers of all kinds, and more are all included.

There are many points of interest within the border of The Black March. From long forgotten temples to strange obelisks built on top of how many beds of quicksand, the land is just as mysterious as it is dangerous. Ozolithian Pathfinders, the first Wardens, could never truly penetrate the region. It is said they actually had to fall back and flee further south to regions more familiar due to the dangers that presented themselves, and this was a time when Melancholia didn't even exist. There are a select few Pathfinder Codecies found detailing The Black March during this time, and these documents are the reason for its name.

The codices depicted many strange fauna, most of which are currently extinct or have fled into the many ruins for protection. The ruins themselves have only been given the most casual explanation. The Pathfinders referred to these ruins as hostile and make a clear distinction that they are not talking about the creatures within them. The Pathfinders state the ruins were built by a strange and dark culture that put an enormous emphasis on death. The Pathfinders also note this culture disappeared due to a mass suicide event, leaving behind the ruins of their civilization, which "have seemingly developed a hatred for the living."