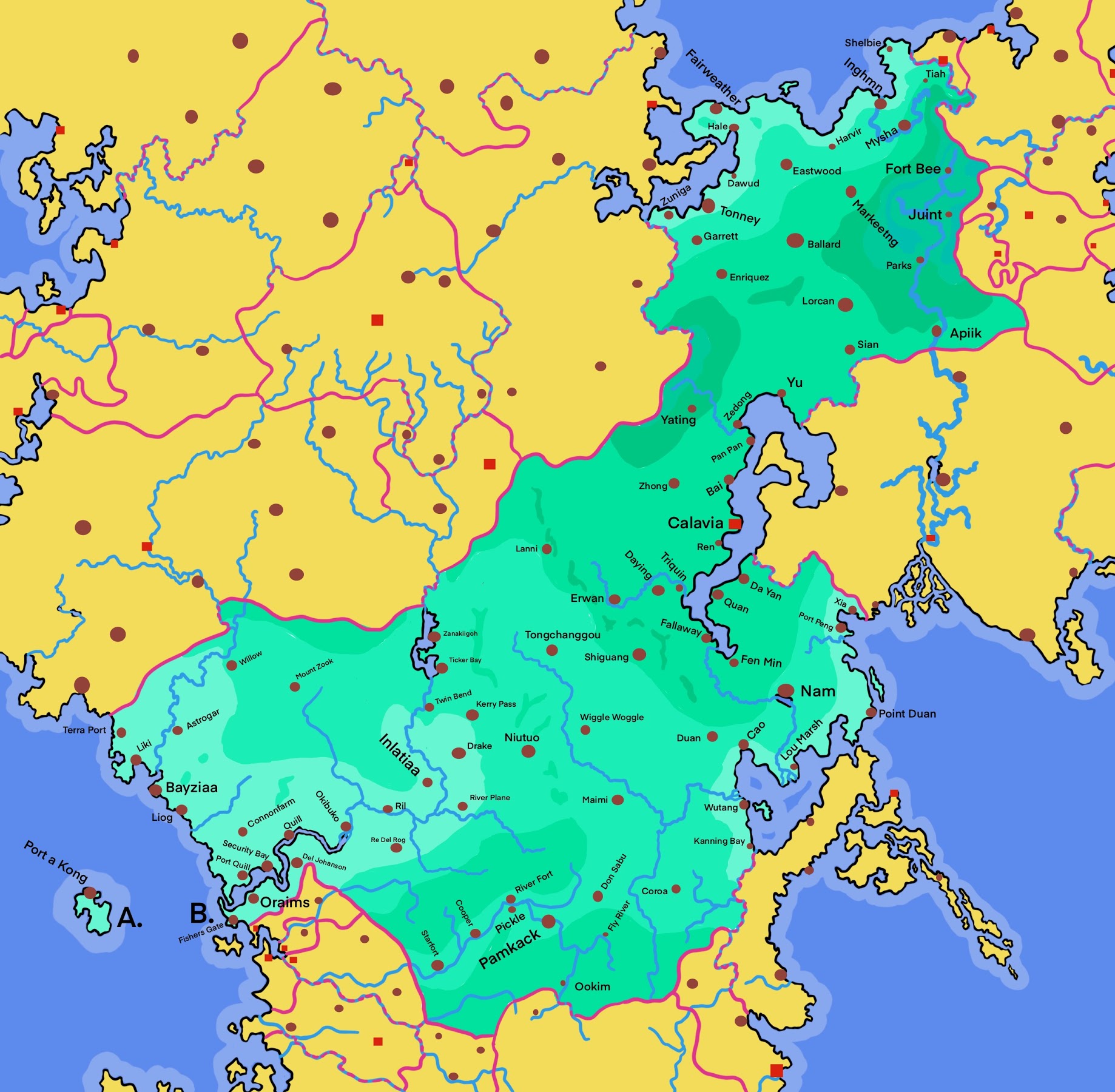 The United Ambergrissarian Empire has existed in its present form and size for almost 2000 years with three minor exceptions that changed the geography of the country slightly. The capital moved to its present location at "Calavia" about 1000 years ago. The Central Royal district of Calavia is the Calavia Castle Island where the Royal Palace is located. The island is pictured below: 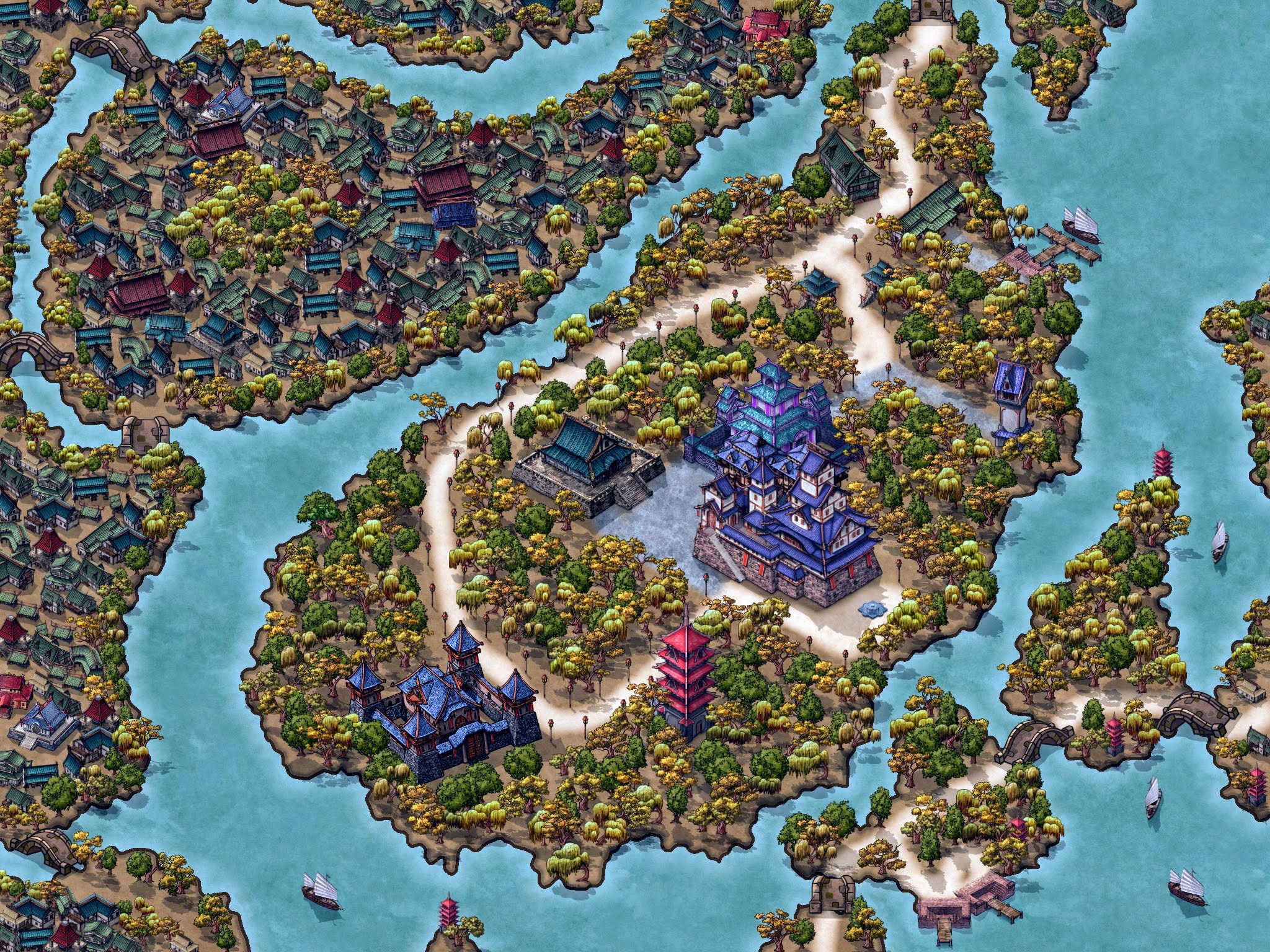 The Kingdom of Ambergris is made up of the bringing together of 3 Federations of States in an overarching structure of Royal governance. The 3 Federations that make up the Kingdom are as below:

In the time before the union, the land was divided into many smaller kingdoms and warlord states. These kingdoms and states remained fairly isolated due to the Great Godrosia Desert in the centre of the old world. In the olden times, there were three areas of power that generally remain in the Empire today. In /./ )-I 12658 two great empires flourished in the southern Ambergris region. "Gobernador" in the east and "Tori Shima" in the west. Through a government union, they merged both Empires together for greater security and influence in the area. They set up their capital city at "Ticker Bay" on the great lake on the Yrem River.   Though not officially part of the Empire till /./ )-I 12666 and /./ )-I 12679 respectively, the two dependencies of "Wanteekoo Do" and "Liujia" were brought into the empire propper as separate states within the union. Both states were not very populated or powerful but territorially important.   After several internal wars the former "Northern Cestle Empire" now lay in ruins. Divided into several states which joined the union roughly over the next 500 years. These included "Unck", "Ko-Cee", "Norince" & "Cestle".   The semi-autonomous Northern Cestle states federated fully in /./ )-I 13258 marking the official beginning of the Kingdom of Ambergris. The capital moved to its present location at "Calavia" about 1000 years ago.   The provinces of "Desa-At" & "Madjuint" were later additions to the Kingdom and both have increased their territories over time.   The province of "Equatorial Bennin" was never a united state previously. The Ambergris people were first civilized and then united by the people of the region ultimately bringing them into the Kingdom as a new province in /./ )-I 13308.   The "Peace and Diplomacy Treaty" with "Purus" gave the state of "Naba Ba" to the Empire about 270 years ago.   The new territory of "Pellg Porto" was founded about 80 years ago.   The Current State Names within the Kingdom of Ambergris are as below: 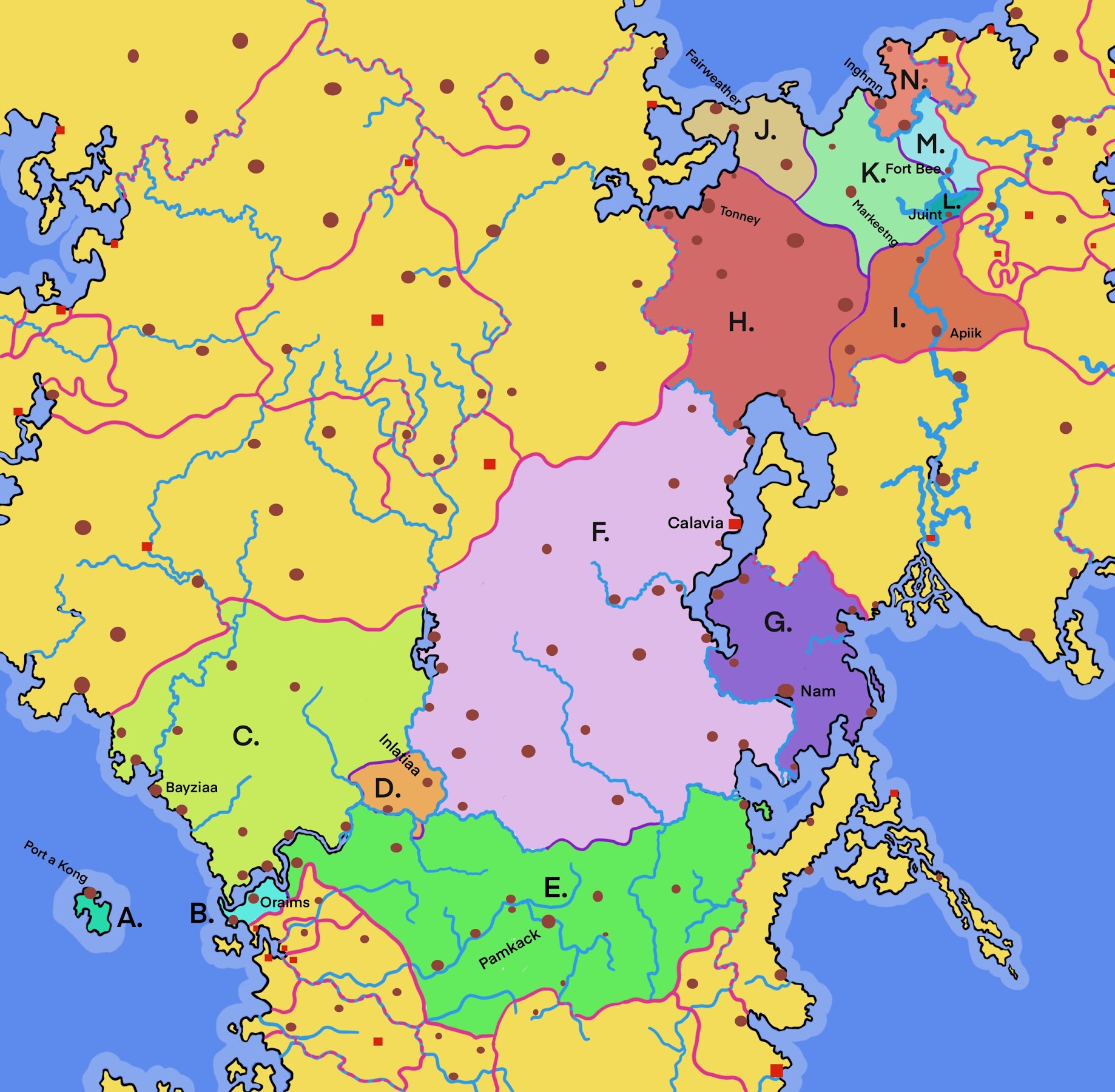 A very rugged and populous island state. Its main export is Timber and grain which grow in great abundance in the tropical climate. The regional capital is 'Port a Kong'

Flat, Fertile, Highley Populated, and very nationalistic, it is important to the Empire as a defense Port and a trade and fishing Headquarters. The regional capital is 'Oraims'

A fiercely independent state which still retains many unique characteristics. Their Royal Family is the strongest influence in the state which is agriculturally based. The regional capital is 'Inlatiaa'.

The last state to join the old union around the time of the federation. It is still a very native province with only the area near the main rivers being fertile and populated. The regional capital is 'Pamkack'.

This province has always held the power of the united empire. Both National Capitals have been in their territory and it has the highest output of any state, Very powerful in trade, finance, defense, and learning. The regional capital is 'Niutuo' and the capital of the federation is 'Calavia'.

The newest and most arid province in the federation. Since it has taken over by Ambergris the Provence has undergone great progress of lifestyle changes designed to modernize it and to bring it closer to Ambergris culture. The regional capital is 'Nam'.

This province is important for 3 reasons. 1) good seaports to both the north coast and the great lake. 2) The largest agricultural land in the north, 3) Its strategic importance being in the center of the northern states and its close proximity to foreign powers and markets. The regional capital is 'Tooney'.

The war with "Galion" that still is ongoing has created this province. it was once mainly part of "Galion" but since falling under Ambergris Control has been transformed into a separate province. The regional capital is 'Apiik'.

A centre for spiritual studies for the entire Romalian & Stabatia Continents. Since integration with Ambergris, the spiritual system has become an integral part of Ambergris culture. The regional capital is 'Fairweather'.

The major agricultural producer in the northern provinces. It was the historic centre of the ancient kingdom which ruled the area centuries ago. The agricultural system still shows examples from this time. The regional capital is 'Markeetng'.

This small alpine is a very fertile province and is heavily wooded and mainly in its native state. However, the people of the region are fiercely nationalistic and insist on statehood within the federation. The regional capital is 'Juint'.

Almost the same size as Madjuint it mainly produces wine and wheat which is prized all over the empire. The regional capital is 'Fort Bee'.

The Mager center for learning in the union. it has held this title for centuries and has many of the finest institutions in the region. It is also the main center for diplomatic activities in the northern states. The regional capital is 'Inghmn'.