Worth its weight in gold

Listen to me. Finding a couple of good clusters will feed our family through the winter - but everyone else will be out looking as well. These are black gold, son, but not worth your life. Promise me you won't fight for them.
— A father to his son

The ashy baby fungus is endemic to the Black Forest in northern Serukis. Across the country, the fruiting bodies are highly sought as their spores are a key ingredient in the popular and expensive alcoholic drink known as tempest.   The name 'ashy baby' is the result of a linguistic shift. In older texts, the species is referred to instead as 'ashy bulb'.

The ashy baby fungus forms in compact colonies, its mycelium growing downwards instead of outwards. Each organism forms an average of six to ten fruiting bodies at a time. The mycelium lies dormant for most of the year, slowly gathering nutrients from the surrounding soil. The warm, wet weeks of early autumn are when the ashy baby truly comes alive, producing at least two consecutive clusters of mushrooms before becoming dormant once more.

The caps of the ashy baby fungus are about the size of an adult human's hand, with flat grey tops. These caps are often covered in rough, darker patches, which are the remnants of the mushroom's universal veil. 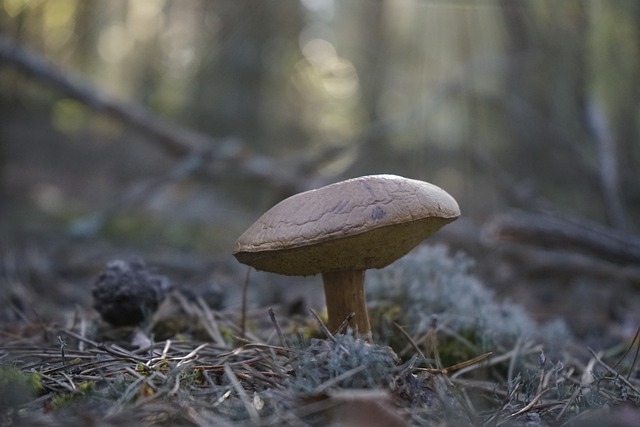 The underside of the cap of the ashy baby mushroom is made up of hundreds of tightly compact tubes, which gives the appearance of a surface covered with tiny holes. These tubes contain a vast amount of spores, which are released after the fruiting body begins to decay.

The stem of the ashy baby is thick and sturdy, covered in shallow striations that run vertically from the cap to the volva. The stems are relatively short, rarely growing to be more than five centimetres in height. It is cylindrical in shape and the same dark grey as the patches on the cap.

Despite its mixological applications, the ashy baby is considered to be a poisonous fungus. The flesh of the fruiting bodies is exceedingly bitter, though it mellows out to be tolerably sharp by the time the mushroom begins to wither. The toxicity level increases with the age of the fruiting body, with younger mushrooms causing much milder symptoms. Eating a young ashy baby will result in stomach cramps and a sense of displacement that lasts up to three hours.   As the fruiting body matures, their development diverges on a chemical level, with no physical variance that would allow an observer to differentiate between them. About half the mushrooms in an ashy baby cluster will induce vivid hallucinations, whilst the rest cause intense vomiting and diarrhoea, leading to irreparable damage to the digestive tract. With the latter, survival past the first few days is rare. Those who do survive suffer from bouts of intense pain after eating for the rest of their life, which tends to be measured in months rather than years. This disparity is theorised to be an evolutionary adaptation to ensure the majority of mushrooms survive to release their spores, as any potential forager would not know which were safe.   The spores are generally considered to be non-toxic, though children will often still experience negative side effects if exposed to them. Adults who ingest the spores have reported feelings of invincibility and dulled sensations. Studies into its potential use as an anaesthetics have so far been inconclusive. 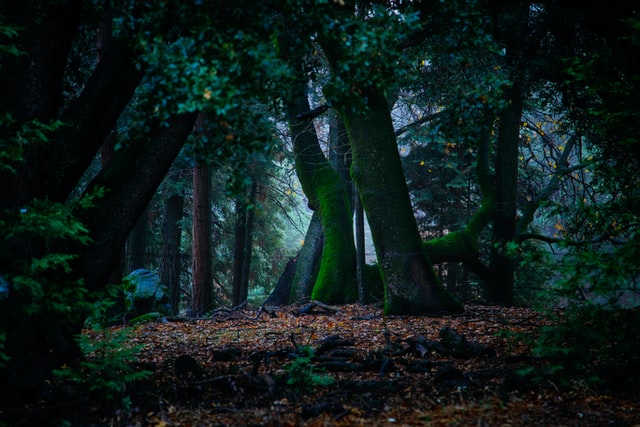 The ashy baby fungus can only be found in the Black Forest in Serukis, despite numerous attempts to cultivate them elsewhere. They prefer damp, loamy soil and decomposing leaf litter in the deeper, more shaded parts of the forest. Local wisdom states that the fungus is commonly found inhabiting the shadows of ancient and twisted trees, but scientific research has proven the incidence of fungus near these trees is no greater than elsewhere in the forest. Local wisdom also states that the scientists have no idea what they are talking about.   Though cultivation in other parts of Caia has so far been unsuccessful, a group of scholars from the Crescent Stone University in Kaien have managed to germinate ashy baby spores in the past year, though they did not grow to maturity. The scholars have stated that they are hopeful for a successful harvest in the next couple of years.

Due to their rarity and relatively small habitat, the peak season for harvesting this fungus has become an annual event in villages within the Black Forest. Known as the Rush, it is a chaotic harvest ritual that has been responsible for no small amount of deaths over the years. As a good cluster of the fungus can fetch enough coin to see a family through the long winter, some people have been known to turn to unscrupulous methods to bring some back.   For over two hundred years, the harvested mushrooms have been bought almost exclusively by the Greyson Liquor Company, who are known across Serukis for their more experimental approach to alcohol. Once bought, the mushrooms are hung upside down to dry in a magically humidity-controlled warehouse. After they are dry, the mushrooms are upturned over large bowls to allow the spores to pour out like ash. Each mushroom contains a relatively high amount of spores, which means that plenty are gathered from even a meagre harvest.   The Greyson Liquor Company uses these spores in one of their signature liquors, known as tempest. This clear, grain-based spirit also contains a carefully-measured amount of ashy baby spores, which settle at the bottom of the bottle like sand. When the bottle is shaken, these spores swirl through the liquid like storm clouds. Imbibers of tempest claim that the rush cannot be matched by any other alcohol, though, due to the high price of a bottle, the sample size of drinkers is understandably small.   Before the founding of the Greyson Liquor Company and the popularity of the Rush, there are numerous examples of use of the ashy baby fungus as punishment in Seruic case law. Known as the ash's gamble, it was occasionally offered to - or requested by - those condemned to death. Those that chose the ash's gamble were offered a small bowl of ashy baby mushrooms and required to eat one. If the mushroom they picked did not kill them, they were subsequently pardoned. This chance of survival was enough to tempt a number of people over the years, despite the equal risk of a drawn out, more painful death. Though this practice of offering the gamble has waned in recent years, it has still been requested twice in the past decade.
Boletes of Caia

Very nice written, as always! Such well written, well-researched articles, with fun little tidbits and tongue in cheek comments mixed in.   I got a good laugh out of this one:

Local wisdom also states that the scientists have no idea what they are talking about.

"a chaotic harvest ritual that has been responsible for no small amount of deaths over the years" this sounds. so intense hahaha I would love to participate during one of these, except for the death part :') this is a great article, I love how you wrote it!

Another interesting mushroom! \o/   It must look quite impressive with an average diameter of 17 cm, similar to B. edulis and similar. It is interesting to see that the spores have more or less the same effect, while the fruiting body as a whole can be pretty unpredictable.   But since every second (more or less) one can be hallucinogenic, does that mean they are also used for that property as well? I wonder... Do these chemicals remain in the dried fruiting bodies? The Greyson Liquor Company could then resell them to alchemists interested in such studies.

Yes, that's true! I'm thinking that there's probably a chemical reaction someone could do to find out which fruiting body they have picked, but no one's worked it out yet. :)   Thank you! <3

Oof that first quote really hit me. Idk I'm soft when it comes to parents and immediately get drawn in, picturing myself in those shoes. I have a feel there be a dark side to this here shroom.   Your descriptions and the scientific way you go about them are, as always, top notch. The toxicity really threw me for a loop. I like an evolved game of Russian roulette.   Oooo I really like the touch on the spores settling on the bottom like sand. That's something I could see happening, and there are a lot of comparable spirits in real life like that.   My favorite bit is ashes gamble. I love that leaving it up to chance made it possible to escape, though a slow painful death would give me secons thoughts. Well done!

Aw, thanks, Dylon! I had a lot of fun coming up with the stuff for this one. :) I think I'd rather go for the non-drawn-out death myself.

Love the mushroom roulette! I also love the way you've described that mushroom liquor, that sounds incredibly beautiful with those spores floating around in it! And also those sentences contrasting scientific knowledge and local wisdom were fun XD   I'm wondering about the reason why not all mushrooms are toxic since you didn't explain the advantage of having hallucinogenic properties for the mushroom.

Thank you! That's definitely something I'll have to consider when I am editing it later on. I'm sure I can come up with some good reason. :)

I love how you think of interesting and unique reasons each mushroom is relevant. The Ash's Gamble is a particularly grim but interesting application for a maybe-fatal mushroom.   I'm curious: how does Tempest taste compared to other beverages? Do the spores impart a particular flavour, or is it purely there for its intoxicating effect?

Thank you so much!   I was thinking it would have quite an earthy undertone/aftertaste to it.

Local wisdom also states that the scientists have no idea what they are talking about.

This took me by surprise hahahahaha   This is such an in-depth analysis for an article of this length, amazing! The Ash's gamble is such an interesting tradition. I think I would take the gamble if I had to choose.

Thanks, Nae! :D I am really pleased with how this article came out.

I love the details in the cultural significance section, particularly about the grim history of ash's gamble as a means to either be pardoned from a death sentence (or fulfil it excruciatingly).   I featured this in my inspirations article for the reading challenge! :D

Snippets of inspiration from 10 excellent worldbuilders

Gosh, I've had this sitting in my Reading List since December. Bad Chris!   At any rate, I was so intrigued to learn so much about how mushrooms/fungi work in general and how the ashy baby works specifically. I think I've said before that mushrooms kinda creep me out, but thanks to your writing they are—no pun intended—growing on me.   Lastly, just when I thought the concept and the story of this fungus couldn't get any more intriguing, you gave us the bit about the ash's gamble. That was such a great concept within the concept and fun/scary way to wrap up!

Thanks, Chris! I had a lot of fun with mushrooms over the course of December. Don't worry about taking a while to read things - I've been completely overwhelmed recently so I understand. <3