There were dozens of 'em circling the ship. Just fins, flashin' through the waves. We could hear 'em, their teeth, their bodies, scraping against the hull. I've never been so scared in my life.
— A ship's captain over drinks in the tavern

The Grey Waters off the northern coast of Serukis are the hunting grounds of the fearsome wolf shark. They stalk the ocean in packs of up to 40 individuals and, if they are particularly hungry, will sink a fishing vessel to get at the humans inside.

Wolf sharks are streamlined, muscular fish, with a large, powerful jaws and a pointed snout. Most often, the only part of the shark a person would see is their sharp dorsal fin, which slices through the wave when the wolf shark is close to the surface. It has rigid pectoral fins, which aid in steering, and a strong, upright tail that helps propel it through the water. Wolf sharks can only move forward, and are unable to swim backwards.   Wolf sharks are cartilaginous fish, meaning that instead of bone their skeleton is made up of strong, flexible cartilage. As cartilage is less dense than bone, it allows the wolf shark to move through the water with much less energy than it would have to use if it had a skeleton of bone.   As wolf sharks do not have an air-filled swim bladder like other fish, this lighter skeleton helps them to remain buoyant in the water. This is aided by the fact that they also have a large, oily liver. Wolf sharks must keep moving, even whilst sleeping, or they will begin to sink. The constant movement also helps them to breathe, by pushing oxygen-rich water through their five sets of gills.   They have three sets of teeth, which constantly grow and are replaced throughout their life. The majority of their teeth have a serrated edge, used for tearing and cutting. Some, however, are much more pointed, allowing the wolf shark to grasp and hold onto their prey.   The skin of the wolf shark is made up of thousands of tiny, tooth-like interlocking scales, known as placoid scales. These give the wolf shark's skin the rough texture of sandpaper, although not many people have touched a wolf shark and lived to tell the tale. 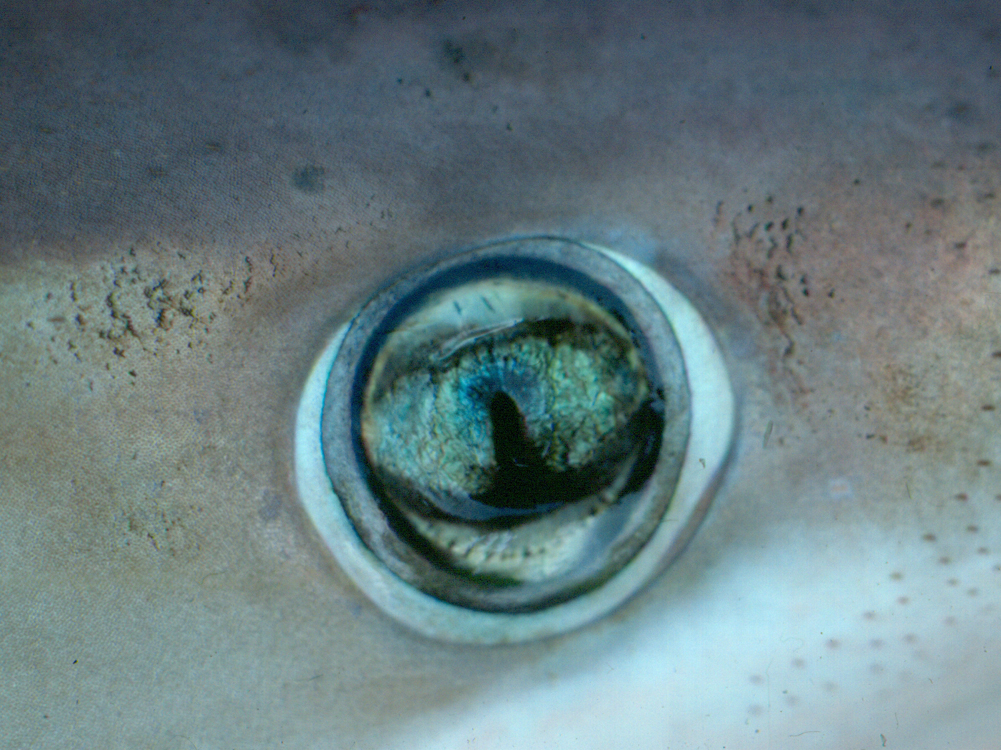 Wolf sharks have an extremely keen sense of smell, able to detect one part per million of blood in seawater. As they get closer to their prey, however, they rely more on the electromagnetic fields of their prey, as they are able to sense this through receptors on their snouts. Whilst they have good eyesight, the eyes specially adapted to see in dark water, their vision is not as important when hunting as their other senses.

During the summer months, wolf sharks head to shallower waters to breed. Whilst the females give birth to the year's litter, male sharks fight for the right to mate. Only the strongest and most dominant sharks will be allowed to mate with the females.   Wolf sharks mate by internal fertilisation. The male and female swim parallel to each other, and the male shark inserts an organ known as a clasper inside of the female's oviduct. The male shark often bites the female to keep her in place during the mating process, and it is often possible to sex a wolf shark from the amount and position of the bite scars. Female wolf sharks have evolved thicker skin in response to this behaviour.   After a gestation period of around 12 months, the female wolf shark gives birth to between 3-5 live pups. They do this in the shallow, rocky waters near the shore of islands in the Grey Waters, away from where the males are fighting for dominance. At birth, wolf shark pups are around 10cm in length.   Whilst the pups are free swimming and self-reliant from birth, the pack will remain in the shallow waters for several months whilst they grow stronger. At this age, the pups are easy prey for other predators, such as the black osprey and the spiny eel. By mid-autumn, surviving pups are strong enough to accompany the pack to deeper waters. 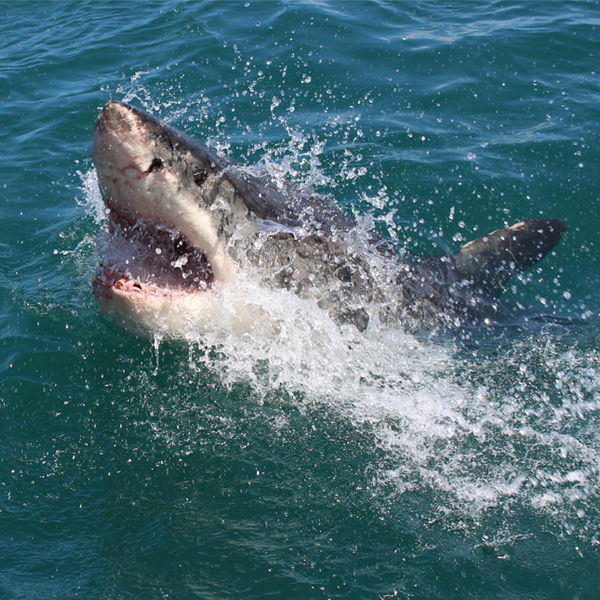 Wolf sharks live in packs in the sea known as the Grey Waters, off the northern coast of Serukis. This is part of the Northern Ocean, though it is not often acknowledged as such. The Grey Waters is full of rocky islands and deep, cold water.   Packs of sharks have their own territory in this sea and use some form of innate navigation to not venture outside of this. However, on rare occasions in times of hardship, packs of wolf sharks have been known to fight over territory. These battles are often short and bloody.   Wolf sharks make use of much of their underwater space, known to dive to depths of up to 3000m as well as hunting on the surface. During breeding season, the pack remains closer to the rocky islands nearer the coast of Serukis in order to raise their young in the shallower water. 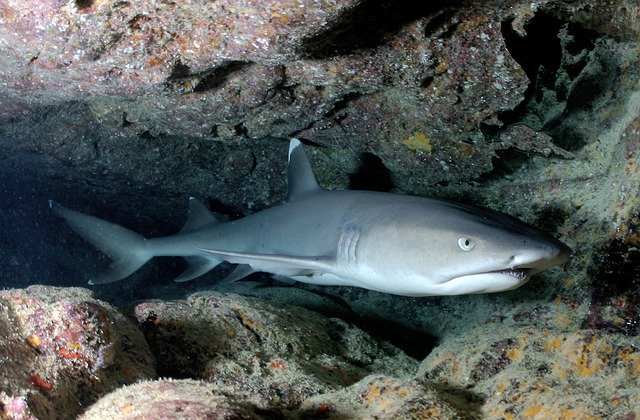 by skeeze
A wolf shark pup, safe amongst the rocks

Wolf sharks are carnivores, and they hunt and eat a wide variety of prey.   Wolf shark pups spend the first few months eating relatively easy prey, such as squid, starfish and crabs they find amongst the rocks.   Wolf sharks hunt as a pack. Most often they will herd large schools of fish into bait balls, where they can feed at their leisure. They also use teamwork to take down large whales, often separating mother and calf for an easier kill.   In times where food is short, wolf sharks will hunt and take down fishing vessels.
Fauna of the Northern Ocean
Etrea © Emily Vair-Turnbull 2020
Images © Emily Vair-Turnbull unless stated otherwise
Default cover image © Pexels at Pixabay | Background © Yuri_B at Pixabay
Cover image: by Pexels

Great article again - really well put together, with a spot-on balance between written and visual information. Loved it :)

Thank you! You are welcome to steal! :D

"... if they are particularly hungry, will sink a fishing vessel to get at the humans inside."   Why bother with the fish when you can eat tasty, tasty man flesh?

Ooof those descriptions. Lots of attention to detail and even using proper terms. I like how this seems so mundane and similar to what we have in the real world with just a dash of special. It's excellent work. the images are also a nice touch. It's really scary that they can sink a boat just to get at the people within.

Thank you very much! I'm really trying for my work to be within the realm of reality so I'm glad that came across!

Beautiful. I love the little details in here so so much! I often try to emulate the same for my WIPs only to fail heavily lol. But Etrea is serving as some beautiful inspiration and i love how you can motivate so easily with this!   Asides from that, I have to give it to you that you can make even the most mundane things amazing. The wolf shark does not have any particularly “flashy” traits so as to say and seems like an animal from our world and yet, you manage to make them so beautiful and detailed!   And I love it as well how you made sharks social animals! Aquatic animals hunting in packs is something I’ve never seen before and I’ll admit, you win on the originality department with this one!   Cheers emy! I really love Etrea and want to see what more you conjure up!