You wanna know if I added anythin' to it? Just sunlight, my friend. Only sunlight.
— Quill Reed, founder of the Sun's Hollow Orchard and Brewery


Once one of the most popular ciders in northwest Serukis, Sun's Glow is now a rare commodity jealously guarded by those who are lucky enough to own a bottle, clay jug, or - in rare cases - a barrel.   For over five hundred years, this cider was produced from the Sun's Gold variety of apple, which was grown only in the orchard of Sun's Hollow. This orchard was created by two brothers, Quill and Leon Reed, who wanted to make a more successful orchard and brewery than the one owned by their brother, Carey.   The orchard was planted in 4811 EA, with five trees taken from the Reed Orchard. Within ten years, Sun's Hollow brewery was producing enough apples and cider to begin selling some of their product to the taverns in the nearby city of Broadgate. 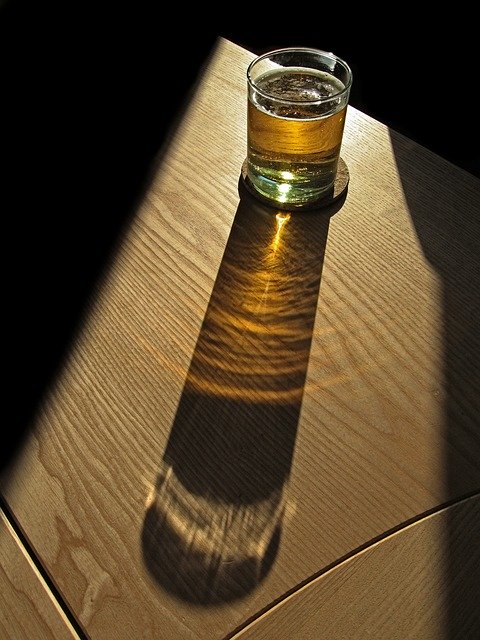 by aitoff
The rapid growth and success of the orchard remains a mystery to this day, though some people believe that Quill Reed was blessed by Faolan, the Lord of Earth.   In 5140 EA, Lord Ashton Vasey officially sponsored the Sun's Hollow orchard and brewery. For the next couple of centuries, the Vasey family remained a staunch patron of the cider, expanding its popularity. In 5329 EA, Lord Robert Vasey presented King Edward Elenasia with a barrel of Sun's Glow cider upon the birth of the King's heir, Prince Camber. This preceded the biggest boom in the popularity of Sun's Glow cider for a hundred years.   Sun's Hollow was destroyed in a devastating landslide in 5340 EA, cutting off both the supply and production of the popular drink.
Sun's Glow is a clear, light amber cider with minimal cloudiness. Tiny bubbles rise and burst softly at the surface. Its appearance has often been poetically and drunkenly likened to liquid sunshine.   Upon drinking, Sun's Glow has a smooth, faintly fizzy mouthfeel. It has a tart flavour that fades to a sweet, warm aftertaste.

No, this isn't right! It's too sweet - and salty? What did you put in this?
— A priest, trying yet another recreation

Only one tree that produces Sun's Gold apples remains. This tree was carefully rescued by priests of Faolan, from the destruction at Sun's Hollow and planted in their temple garden.   In the six years following the landslide at Sun's Hollow, several attempts have been made to recreate Sun's Glow as the supply has dwindled. The priests of Faolan who have attempted the task have tried adding different mixtures of herbs and spices to the fermenting apples. In frustration, they even mixed in several other varieties of apples to a few batches.   However, none have tasted right, and the mystery of Sun's Glow remains.
Seruic Drink
Etrea © Emily Vair-Turnbull 2020
Images © Emily Vair-Turnbull unless stated otherwise
Default cover image © Pexels at Pixabay | Background © Yuri_B at Pixabay
Etrea World Theme © Elias Alija 2020
Cover image: by Liana Mikah

This article was originally written for the Cheers! flash challenge in October 2020.

Ahhhh! The treeee. I remember the tree. This is well thought out. I love how it focused on this rare ingredient and process. I really enjoyed it. A lot of alcoholic beverages have their stories in the real world and some are unique. Some even can never be made the same again. I can only imagine how much this would cost, assuming someone would be willing to sell. Well done. Particularly love the "liquid sunshine" bit.