On The Giving of Flowers

A marital, funerary, and natal rite of the Faecha.
"I give to you my soul."

This story, as with all good stories, is just old enough that nobody can tell you when it was first told. Maybe it's just the invocation of an archetype, maybe there's truth to it. My mother told it to me, and her mother to her, and... well... you get the idea; so on and so forth around a hundred hearths.

This is the story of the Lovers.

Freachna and Lakeshi were born under very different circumstances, but their lives ran in such parallel paths that it's clear to us now that they were destined for each-other. Fraechna grew up in the North, far beyond the blood and strife of the early Banners. She was born to a reclusive village of kind souls. Their valley was secluded, walled in by high mountains and dense woodland. I am told it is peaceful to this day.

She was a happy girl, with loving parents; they taught her how to fight, how to lead, how to be her own woman. She grew clever, with a smile easily summoned and lavender eyes that glittered like gems in the sunlight.

She learned to love.

Lakeshi grew up in the south, amid the tyranny and strife of the Mar’rianian Territories. He was born in a city of squalor. Today it is ash, and the world is better for it.

He was a miserable child, with a father who hated him. He was born of a previous marriage, and always took second fiddle to his brother. He was kept in the basement, and was fed scraps.

He learned to hate.     When she was 13 Fraechna was abducted from her village by a cannibalistic cult who learned that she was a Vodalkyn, a natural-born seeress. They sought out Vodalkyn to break them, to train them to do their bidding. Those who resisted were eaten, the rest were taught to use their natural inclination towards divination to hunt and kill those who stood against the cult, and to find more Vodalkyn. They put venom in her blood, and they taught her she was nothing.

When he was 13 Lakeshi’s parents sold him into slavery to a coven of local witches. They made something of him, but nothing he’d ever wish to be. Not a monster, not a blood-drinker, not an undead, but something blurred the lines of all three. A beast. To what end? None. He was nothing, an ends to a means, a throwaway experiment before the actual project. Such is the nature of the territories.

Ever since she went missing, Fraechna’s parents hunted for her nonstop. Every night they prayed, working their way from the top of the pantheon to the bottom until at last, on a night when they burned a red candle in winter and spoke the name of The Eater, he came. He agreed to find and free Fraechna, but in death he would claim her soul. The tales of the servants of The Eater were less dastardly than those of the cult, and so they chose the lesser of two evils.

The Eater found her and returned her. She left a girl, she returned home a woman, and began to thaw.

Each night since being sold Lakeshi’s torture grew worse. Sobbing, he prayed, working from the Wheel to the devils, until at last the latter responded. The King of Fangs arrived, and bargained for Lakeshi’s freedom in return for his soul to be claimed at a time of his choosing.

He stumbled out into the world, and left that place. He found himself as a man in a bloody birth of ripping teeth and prying hands.     Their world, Joutai, had discovered Earth. Immigration had begun.

They met on the flight to Earth. They didn’t even speak the same language.

They fell in love by the time they landed. They recognized hardship in eachother's scars and eyes, and knew they could be themselves together. Neither ever spoke of their past, but the pain was known. They innately understood eachother.

They lived together. They learned the native tongue together, and so could speak.
They helped other immigrants gain their footing, and they learned to make a living doing so.

She remembered how to love.
He learned what love was.

And then they died.

Hands upon curves and mouths upon muscles. It was at the very peak of their love and during their amorous expression of it that they were torn asunder. At their most vulnerable, fragile moment they were shattered like glass.
Being a seer, she saw it coming a mere moment before it happened. She heard the beating of drums and the crack of a gun and she drew back from the kiss just in time for the world to go dark as the round cut across her face.

She was blinded. He was shot.

Both survived by their own means, but thought eachother to be dead.

Both thought their past had caught up with them.
Both were right.

Each blamed themself for the other’s death.
Lakeshi woke. He remembered the plume of blood, he remembered the last look in her eyes. His life moved to the beat of her heart, especially after it stopped. He remembered hearing the drum beat the witches had when they did their rituals.

Their paths ran in parallel for years, but they never crossed. Each hunted, fueled only by their desire to avenge eachother. She learned too late that he was alive. Their paths finally converged as they tracked the Queen Witch, but it was too late. Just as they united, the Queen Witch made Lakeshi mortal again, killed him, and escaped Fraechna's wrath.

She was his last vision. They kissed, and as he died he murmured “I give to you my soul.”

"I give to you my soul," Lakeshi whispered. Fraechna saw the lights in his eyes extinguish, and knew he was gone.

"He cannot give you what he has already pledged." spoke a voice behind her, and she turned to see The Eater, with his face of metal and his teeth of knives. "But in his death I will protect him."

"If I give to you my soul will you keep me with him?"

"Your soul was given to me for your freedom, and I will."

She nodded and said what she did not know needed to be said to complete the deal her father had once made all those years ago."Then I give to you my soul all the same."

The Eater bestowed upon her a portion of his strength, and she killed the Queen Witch.

The Eater, the King of Fangs, had woven many plots throughout their lives. He’d set events in motions in nights which took years to play out, and when they did few were the wiser. The Queen Witch was dead, seemingly from nothing, and for it the world was better, safer. Those children would no longer be abducted, they'd had their revenge.

They had lain his wife to rest.

They gave it their all, and that is all that matters.
This is a story of the Lover’s Flowers, and why we give them to eachother when we marry.

This is why we do not hate Cannibal, the Eater, the King of Fangs: He freed Fraechna and Lakeshi. In them he saw a deeper love than he’d ever seen in his thousands of years of life. He buried their bodies and grew red flowers on their graves. Lover’s Flowers, the very same we place on an infant’s belly when it is born, upon our heads when we marry, and on our graves when we die. This is why we do that.

Cannibal did as he said. He protected their souls and held them within his heart, and when the time was right he gave their souls into two children. As if by fate, those children eventually met and fall in love, even though they speak different languages. They innately understood eachother’s history, and they were inseparable for it.

Each time they die, he collects them, and he holds them, and he seeks two more children. For some love stories are too good to tell just once.

They looked down at their newborn, smiling. She was beautiful. Each of them lay a Lover’s Flower upon her belly, and crooned as she weakly grasped at them.

He smiled at her, blushing. She stared fixedly into his eyes as the priest, dressed in black robes and wearing a metal skull mask, spoke.

“What do you have to offer him?”

“I give to you my soul,” she recited, placing a laurel of red flowers upon his head.

“And what do you have to offer her?”

“I give to you my soul,” he recited, placing a wreath of Lover’s Flowers upon her head.

“Then may you be the lovers, and may your love echo through time.”

”I give my to you my soul,” she murmured, her final words as her husband held onto her hand.

They hung a wreath of Lover’s Flowers on her grave.

I will hold you as you die,
old
warm
safe
your head on my chest
a smile on your lips
a wreath upon your brow
as your last breath


leaves.
— A poem on Lover's Flowers 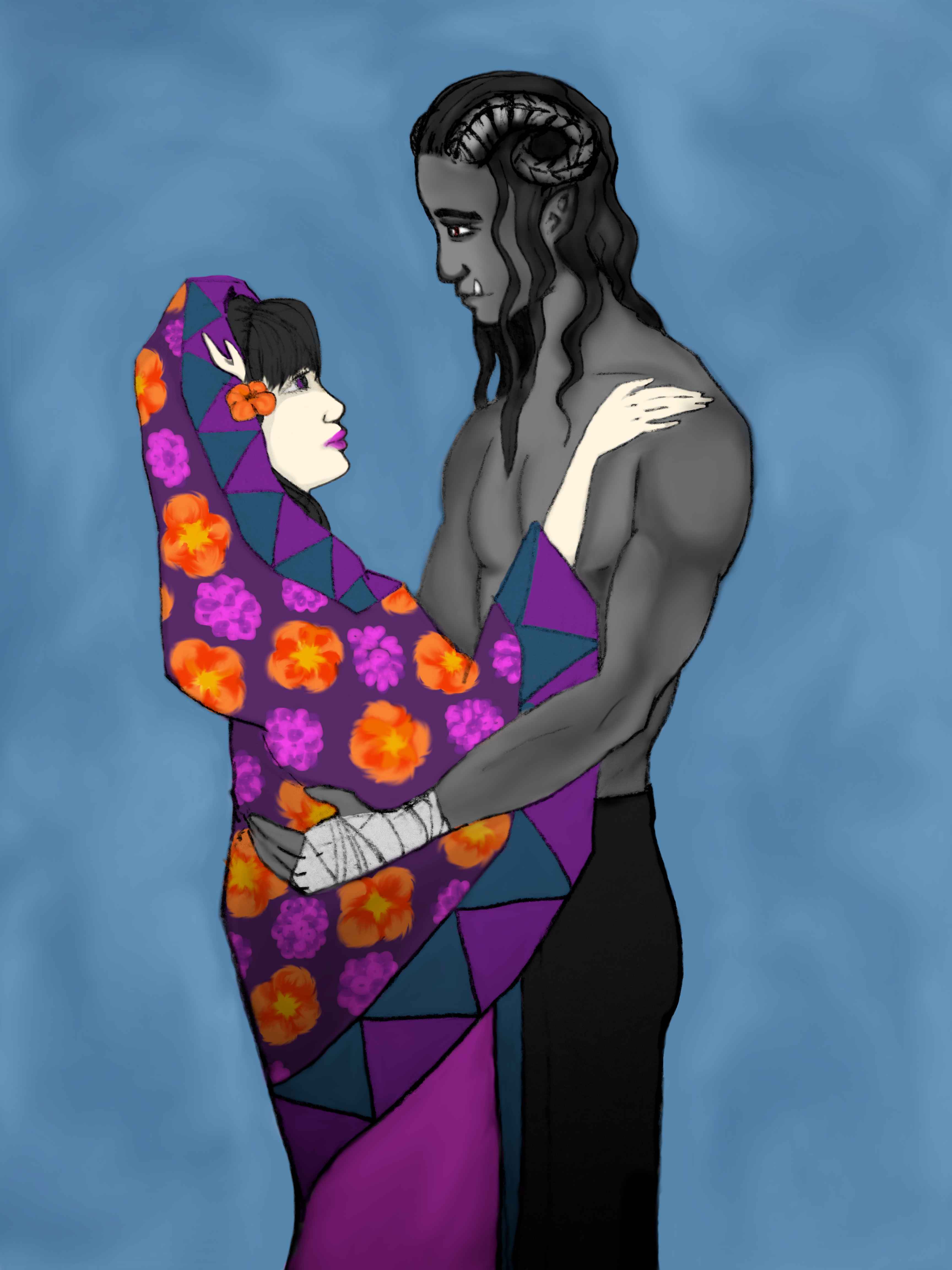 This was an exceptionally moving article. I absolutely love how it transitioned between teller and story itself.

For a long while now, I've read stuff Ademal has written, mostly relative to his world and the goings on in it. A fair amount of the more intense stuff he rights makes me sob a bit and tear up. This, this made me cry a bit and now I need to recover.

Thank you, that means a lot ♥.

That is a great marriage myth.

Thank you very much! ♥

This was a moving piece to read! I enjoyed the cyclical pattern woven into the myth where love clearly transcends the mortal timeline. I was wondering though, if Fraechna was a seeress, how come her powers didn't give her the knowledge that he was still "alive" after they were attacked?

Oooh good question! That digs a bit deeper into the Vodalkyn lore, but basically each Vodalkyn has a specialty. Hers is danger sense, which lets her sense things moments before they hurt her. There are trackers who can find people, but unfortunately she is not one. </3

This is excellently written and highly evocative, but if I may be so bold as to ask a question - how did you format the text boxes? I'm new to the website and can't seem to figure it out.

Thank you! I use

. It doens't like line breaks so you have to mash all the text in there and separate the line breaks with
tags. I've got an article here explaining more: https://worldanvil.com/w/world-anvil-codex-Ademal/a/worldanvil-format-guide-article
Admin of the World Anvil Codex & Discord | Director of Ethnis | My Ko-Fi | My Twitter

Thanks so much, the article is wonderfully helpful!