All but one of the crimson suns had set, and even the remainder struggled to keep it's torpid, crimson eye above the distant rolling seas of sand and dessicated coral. As the light of day waned, freezing air swept down from distant peaks and brought a shroud of mist with it.

We had parked our ship on a plateau to watch the sunset and enjoy a meal outside of the cramped quarters of our vessel. Giandar sat by the fire, stoking it back to life with logs we'd gathered hundreds of kilometers from here. He was still picking the meat from the bones of his meal. Slow eater.

The call of Ishara, my daughter, drew my attention away from the red eye peering through the mist.

Giandar grunted and looked away. That was all he needed to know.

He was not a fan of the tale, believed that it was holding onto a hopeful past that would never and could never come to fruition.

"Annem!" Ishara said, tugging on the cuff of my shirt. "Annem! Annem! Annem!" Her cries were growing more shrill with each, piercing through the fog and echoing back

I placed my hand on her face to hush her, she shot a contagious smile through the cage of my fingers. 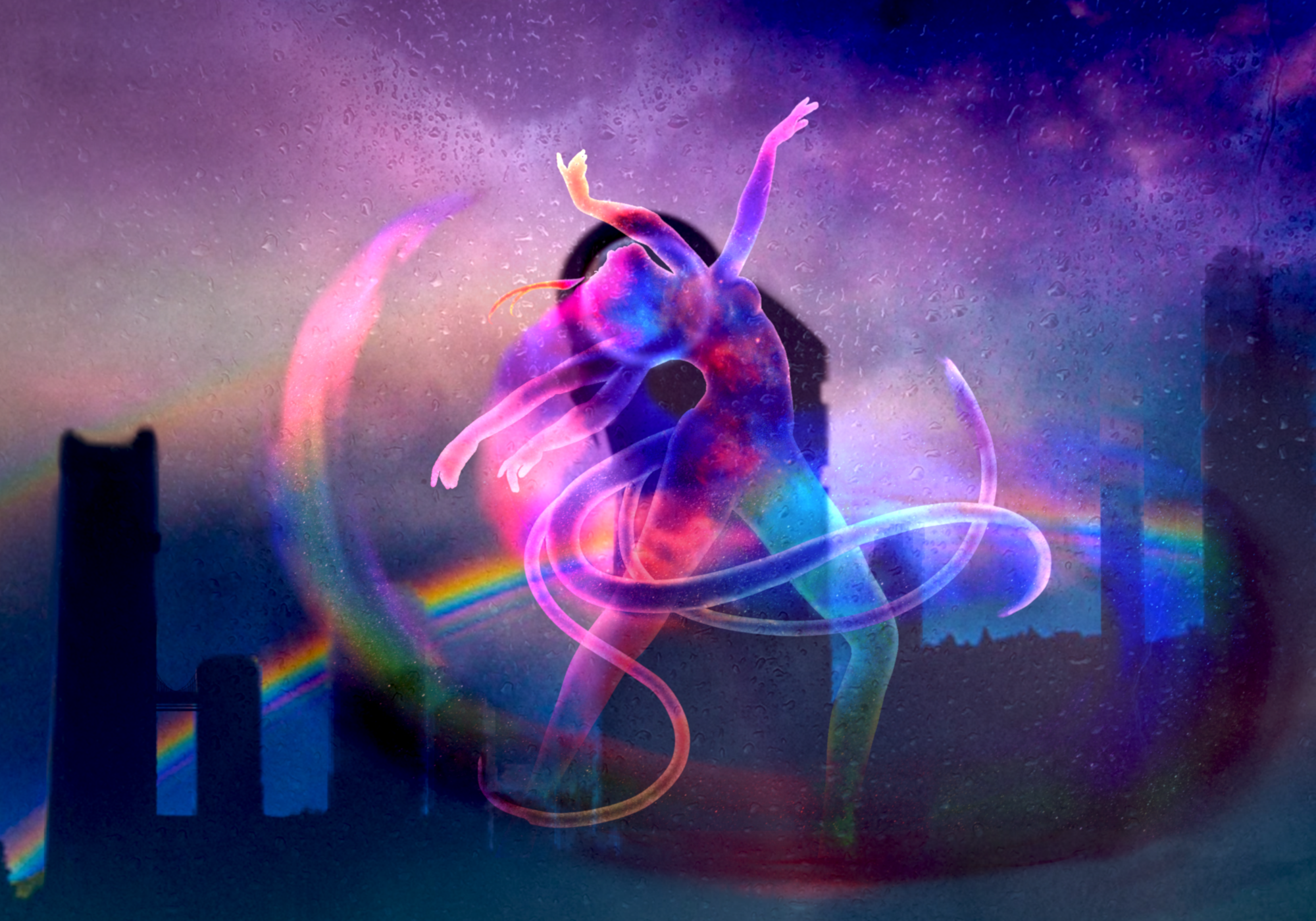 WIP art of Anthem dancing in the harbor of Aempis

The Tale of Anthem

Anthem was an Engine, a super-ai. She expressed herself through holograms and art.

"...a Goddess wrought of the hands of Sazashi, Humans, and Verin combined. They put their heads together and she leapt from it fully formed, heart light with the best traits of each. She grew fast—"

"Like me!" Ishara said, flexing her arms and grinning.

Although it was primarily a Sazashi operation belonging to one of the countries of what later became The ValuSelu Pact, Human and Verin scientists were involved as well.

This act of the three Sophont setting aside their differences to create Anthem is deeply ingrained into the imagery and myths surrounding Anthem, and is considered partial proof as to her perfection. This mix of species is represented in her body: long legs, furred ears, horns, tails, claws, an expressive mouth, wide hips, and so forth—markers from every Sophont.

"As Anthem continued to grow, she brought a great prosperity to her people. She developed Sensate, which allows people to share their feelings..."

"Like how Sahi shares her love?" Ishara said, cutting me off. I nodded warmly, and sent a pang of love over our Sensate link.

"What else did she make?" Ishara asked.

Ishara's eyes went wide with wonder, as they did whenever I told this tale.

The Thrum, also known as Anthem's Song, was a constant audio broadcast put off by Anthem which played in many public spaces and which any person could tune into via their Sensate implant. While engaging the Thrum over their implants, people found their minds to be clear, their burdens to be lesser, their lives to be better. Crime went down, and the economy went up.

"Unfortunately, however, not everyone felt that Anthem was good. A group of evil people, The Harrowing believed that she was controlling the people with her Thrum-"

Ishara interjected. "No, she was helping them!"

I nodded. "I know, Isha, but they didn't believe so. They believe that a mind must have sorrow to have joy, that Anthem was unnatural. So they attacked her."

The tale of Anthem is one of despair and hope—a mixed emotion which the Sazashi refer to as Sukjhrati. She was a pivotal figure in the formation of the The ValuSelu Pact—the alliance of Sazashi nations which most Sazashi at least respect even if they aren't a part of it.

During the Bannercasting of the Pact it was quite nearly destabilized and destroyed by The Harrowing—those extremists focused on tearing down the pantheons of gods and kings to bring out a new beginning of the world. Amid the targets of The Harrowing were the Engines of the Pact, beings they referred to as neon gods, idols of the people which they too-easily accepted as allowing to think and act on their behalf.

They attacked the Engines, leading to the events at Audiograve wherein Brood Blood-Kin and Anthem fought, Brood was killed, and Dirge was supposedly born in the Composition of Dirge.

When The ValuSelu Pact organized itself into a Banner and angled itself to travel to the stars, Anthem followed. She made several Engine Cores of herself, something she had never done nor allowed to be done, and gave them to colony ships.

Each of these Cores contained a Daughter, a branch of her source code with very little of her memory and experience. She had faith in them that, no matter what happened, they would always know what to do. By default they were off, but should anything bad happen, they would awaken to protect their people.

The Melancholic Lacuna came to be, and all were left to their own.

Anthem, whose core was at the time on a Pact capital ship, was lost.

Nobody knows where they are to this day, but some say you can hear their song among the stars if you listen closely enough.

"And so she is out there, watching over us, waiting. She listens still, looking over us, not speaking but sometimes you can sense her actions and hear her song. She watches over us, and perhaps is even quietly the Fourth Sovereign."

"The four sofren?" Ishara asked, lacking the teeth at the moment to hope to pronounce the word correctly.

I nodded. "Sovereign. One for the Sazashi, who took the right. One for the Humans, who once were the spurned. One again to the Verin—lost, now returned. The last for a machine, the true and forever Queen." I put my fingers up to count each.

Giandar cut in, "She may have had a kind heart but she had no foresight. Her fight with Brood made Dirge. Her use of Sensate made addicts, Desire, and so The Apple of Hedonism. It is not enough to be good, for she lacked wisdom."

"Dirge is a myth," I hissed to him. "Anthem was at least seen, she is still out there, still looking after us, still listening. She is just being careful."

"Anthem is either dead, insane, or a coward," Giandar growled, gnashing his teeth.

Ishara's yell took us both aback.

"She's still alive, and I'm gonna find her! I'll bring her back and she'll make eh-ver-y-thing okay!" She said, struggling to pronounce the word.

I swept her up, cooing, and cradled her in my arms. "I know you will, honey... now why don't we explore around a bit?

Causes of Terminal Failure within infomorphic entities such as robots, Icons, Engines, and so forth, and how to prevent it.

The odds are not on Anthem's side. The ship she was on was powerful, but did not come without limitation. Over the long silence of the Melancholic Lacuna it is almost a certainty that the ship she was on ran out of reserves of power and food—it was a colony ship, and thus had the materials to make a world, but maintaining a ship of that size comes with work, especially after such a long time adrift.

Slowly the components of the ship would have worn out. Lives would have been lost, and Anthem's core would've had less and less functioning parts to work with.

There is a very high chance that the crew is dead, and that Anthem's core is defunct.

I'm still looking for you, Anthem.

I will find you.

Enigmas are the unanswered questions of Ethnis.

Dead or Alive?
Did Anthem succumb to Infomorphic death or did she and the crew of her colony ship manage to make do while adrift in space? If she survived, what sort of state is she in—is she the same or has corruption tainted her? If she's dead, did she leave anything behind?
Goddess or Fool?
Is she really so great, all-loving, and all-helping, or did she pave the road to hell with her intentions? If she came back, what help would she be, or what damage could she cause? Is it wise to worship a constructed goddess?
A Lost Dynasty
Where are her daughters? Which worlds did she send them to and why did she choose those worlds? What differences do her daughters have to her—replication can't be perfect, she had to make their personalities different, so what did she change?
Myths

The layout/CSS on this is so so good! The stuff happening in your sidebar is killer!

I love and share your sentient AI enthusiasm on a spiritual level ^-^ A small note: you accidentally messed up a link, "Sukjhrati(language:f9893c1a-9a94-4598-8766-b2b6cdbf4a61)." - Also your "Please fill out this field" is on top of the comment box and obscures my text.