Saumentho Rut are a type of Rut Olu which originate from the Olura shores of the Verra Region of Jhoutai. The Haimarchy has adapted them into an Orga Tech solution for 3D printing and advanced agriculture.

A Means of Survival

If our only measure of wisdom was to garden, the Saumentho would be our gods.

Ecological shifts caused by the current interglacial period, which began about 600,000 years ago, posed an existential crisis for any species which didn't adapt.

Shifting oceanic thermoclines drove to extinction many of the aquatic flora which were unable to grow outside of their zone. During this period, the saumentho survival relied on farming their temperamental sources. Acidity sensory glands, complex chitinous tools, and an intelligence optimized to micromanaging the growth of plants became primary adaptation traits.

As the millenia continued on, they spent more and more time on land, cultivating the plants they found there. They became a keystone species for the propagation of the region's many plants.

If you find yourself guiding the saumentho instead of following, you've done it wrong.

Early Sauthei tribes, renown for their agriculture, owed their growth to the saumentho, whose cultivation techniques they studied and replicated long before domesticating them to do the job.

Once the Meta proliferated through the world, Sauthei began to use it to understand and domesticate the saumentho properly. They bred them for differing purposes, from small ones to use as pets or for artistic gardening, to massive ones which could carry a small crop on their backs. Soon, entire regions were flattened and filled with shallow water and shoals for the saumentho to live on, and they became a part of the Verin ecosystem as well.

In modern times, the Haimarchy, and to a lesser degree the Pact, still leans on the saumentho for farming. Their balance of efficiency and sustainability makes them the superior form of farming for orga-focused societies.

Honey, your bonzai tree is halfway down the drive and making a run for the fences again.

Nupha pressed her vambrace to the lock. She felt the kinetic cilia slithering in to explore.

It clicked open, and she moved the memory of the tumbler from the vambrace to her saumentho printer. It grumbled in her pocket, layering chitin onto a blank key.

"Treats if you're quiet," she whispered, glancing around inside. Mercifully clear. The saumentho was quiet, too.

The other thieves didn't have a kinetic skeleton key like her, and she didn't like how long it took to run, so having a key for next time would prove useful.

It's easy to mistake the saumentho's shell as being a part of its body, an exoskeleton, when the truth is that it's more of a shell.

Saumentho secrete compounds from he spinerretes of their tentacles which, when combined, form a resinous chitin. They use this to create armor to retain water and repel predators, and to replace their claws with tools which fit the plants they've adopted into the pot on the back of their shell. These claws might be optimized for trimming dead leaves, stirring dirt, peeling bark, or any other number of implementations.

The precision with which the saumentho can shape and control their chitin as they weave it is down to a resolution of one-half of a millimeter, with edges sharp enough to rival the utility of glass, stone, or metals.

As the Haimarchy advaced in orga tech, they mastered the ability to hijack the minds of lesser creatures, lobotomizing their will and replacing it with automation.

Using this, they have made entire saumentho farms into 3D printers, creating all manner of amenities for daily life as well as some military and civilian armor solutions. Saumentho chitin printing fills much the same niche as plastics in other banners, which makes sense given the compounds which the saumentho chitin is made of. 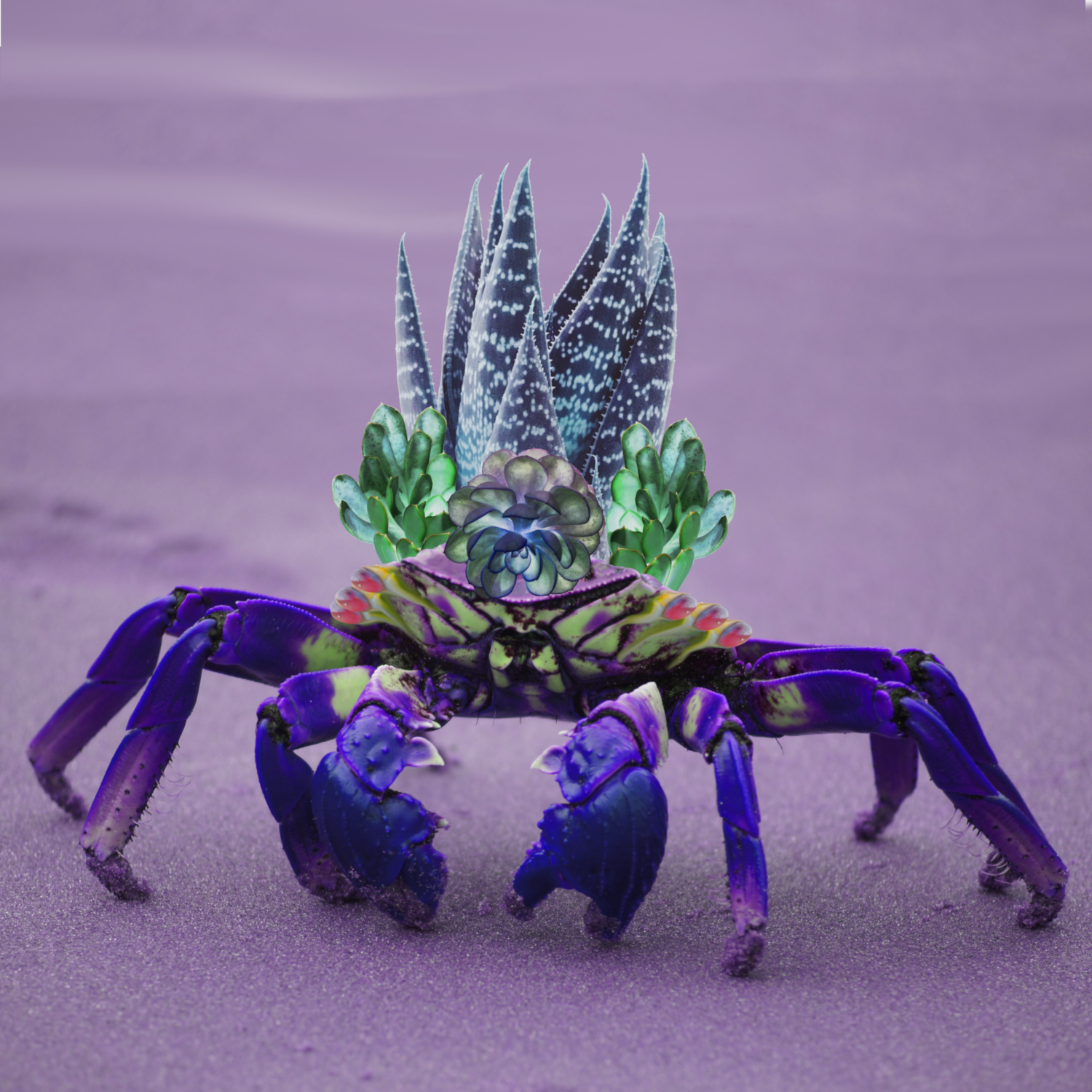 Shelless saumentho are ten-tentacled arthropods with eight eyestalks. The forward four tentacles split into 4 digits per tentacle, which are both manipulators and spinnerettes. They have a large head, mandibular tentacles, and a beak.

The shells they adapt are jointed and appear as a mixture of crab and spider. They are often spikey, and always have a bowl shape on top for growing plants in.

Geographic Distribution
Phonetics (Aeai)
Soww•Mehn•Thow || Root
Definition
Saumentho, being composited of Sau and Mentho. Thus, Saumentho Rut tha Olura translates to Gardener Bug from Olura.
Sexes
Saumentho are hermaphroditic, and can self breed if no viable mate is found.

The shores of Olura are a forest of orange reeds rising from the lavender sands of Saumentho shells.

Through the millenia, the Saumentho have migrated back and forth between the sea and the Coral lakes, taking root in the land, expiring, and eventually leaving behind a gravel and sand of their shells.

At the end of its lifecycle, saumentho breed and find a spot to bury themselves and die.

They dig a hole, fill it with food, climb in, and bury themselves. They then perish causing their eggs to hatch within their shell. They are consumed by their offspring over the course of weeks.

By the time the offspring dig out from the cradle/grave, they are strong enough to care for themselves, and the cycle begins anew.

They don't taste bad fried, either.

Your bonsai quote is the best! I love the thought you put into these and it was fun to see some of the refining happening real-time in your Discord.   The comment about lobotomizing their will made me sad... We do that in different ways to animals already, though, so it's certainly realistic. Still makes me sad.   These are so cool.

Yeahhhh. Orga tech is uncomfortable like that. It leverages evolution, then polishes it up a bit and turns a creature into a machine instead of a mind.   Really glad you enjoyed!

I adore this concept! The quotes are fab, and the life cycle info makes it feel all the more realistic. Stunning layout as always