Towers of marble preside over the Audiograve, rumbling with songs too low to hear, but which we understood all the same. It's not a song which plays out in beat and rhythm. It is something else entirely, and comes from somewhere else. It comes from somewhere we Cathartic have only scratched the surface of.   It is a whisper of Anthem's Thrum.   It is all that remains of Her.   This is what we died to protect.
— A Veteran Cathartic

The Audiograve is a mixture of monastery, temple, graveyard, and pilgrimage site. It is located in the country of Aempis on the world of Jhoutai, in a largely vacant quadrant of the megalopolis of Drat'n Metkrah.

Though Engine are somewhat common these days—managers of worlds and colonies, book keepers for the Banners, generals in the battlefield, keepers of the economy, and so forth—this was not always the case. In the beginning there were only three Engines.   Warden, Foster, Anthem.   Minds so great some considered them to be divine.   Warden watched over law and war.
Foster watched over hearth and economy.
Anthem watched over joy and entertainment.

Before the signing of the ValuSelu Pact, the Audio Grave was a science and advancement sub district within Drat'n Metkrah. Specifically, it was where the primary server farms for Anthem resided.

Anthem was the first to reveal her Sophonce. The other two had played dumb for years before her creation, but she reveled in her existence. Her directive was to bring joy, and she took to it with zeal. Her rainbow-colored avatar was known to all.   She invented the Thrum, a song which played in all corners of the land. It listened to the world and to your heart, and when it felt pain it brought peace. It became addicting. She invented Sensate, which allowed people to share their joys and pains, to invent sensations and emotions which had never before been experienced.   Anthem came to be revered. The Anthem of Life. The site of her creation became known as The Cradle of Tonality, and a cult formed around her, then a religion.

After the introduction of Anthem's Thrum, the song which soothes all sorrow, Anthem became somewhat of a religious figure. Artificial as she may be, her expressions and feelings were those of a living creature, and her love for the people was genuine. She gathered a cult following, the Rapt Audient, and the sub district gradually became a place of art. Rapt Audient Musicians, also known as Cathartic, could be heard playing all through the day, trying to recreate her Thrum. It became the host to a musical renaissance.

She got ahead of herself. Her inventions ran away from her. Thrum and Sensate addicts littered the streets and undercities. They turned inwards, into sickness and depravity and away from a wholesome persuit of life.   In the womb of this society, Desire was born. Anthem's Bastard.   In the shadow of this society, Brood Blood-Kyn undermined Aempis, and attacked. Anthem managed to suppress her power and fury with the power of her Thrum, and Warden organized the Pact's finest to cut her down. As Brood perished a final note rang out, not one of Anthem's creation—a Dirge. The House of Sorrows was born that day.

When Brood Blood-Kyn and her pack of God-Killers were terrorizing Jhoutai, they eventually came to Aempis to kill the Monolithic-King, Clasnithra Khandea, and destroy the Triptych of Engines, beginning with Anthem. As the first move of her attack she knocked Anthem's server offline.   The Cathartics, who had begun to understand how to use the Thrum, rushed to protect Anthem, to drive back Brood's Selschaeus (Dark Unity)—that creeping corruption of despair—with a spontaneous symphony. Many of them died, but they were able to hold her back until Anthem could be brought back online and add her powerful voice to their song. The Thrum nullified Brood's power, and Warden finished her off.

As the Pact spread to the stars, Anthem split herself into shards and hid them among the stars. Daughters to learn from her mistakes and to grow from them. They are still out there, waiting, growing, aged by the Melancholic Lacuna.   The Cradle of Tonality today sits empty. The graves of the Cathartic dot the landscape, each placed at that Cathartic's favorite place to play their music.   In the night, the descendants of her followers play a song, hoping to hear hers in return.

After Brood's death, the sub district was renamed to Audiograve by Anthem, and she had a memorial constructed for each to the Cathartics who died protecting her. When the Expansion era began Anthem split herself off into many revisions and hid them on other worlds, children to grow up and grow wise.   It is unknown if he actually killed Anthem, or if she has hidden herself out there. The Rapt Audient remain, praying at the site and maintaining it, ears trained for the day they may hear her Thrum again.

Read the Author's Notes to see why I chose this song.

The Cradle of Tonality The building in which Anthem's original servers were kept. Though the servers are no longer active, Rapt Audient maintain them and pray around them daily.

Cathartic Veteran Shrines The entire region is dotted with small shrines marking the graves of the Cathartics who died protecting the Cradle when Brood attacked.

Some of these Shrines are difficult to reach, as they are placed where Anthem remembered that Cathartic liked to play. Each grave is marked by a small statue likeness of the Cathartic, and speakers which play their best performances. Most of these sites are adorned with all manner of offerings, and Pilgrims make a point to visit each of the 200 shrines on the grounds.

Rapt Audient Graves Many of the other buildings in the subdistrict have been converted from their original use—stores, labs, residence, etc—into tombs. When many Rapt Audient die they pay to have their body shipped to Jhoutai and buried in these indoor groves.

The Rapt Audient Monastery Though the region is considered a Grave it is not without life. A settlement of dedicated Rapt Audient live onsite, maintaining the Audiograve and teaching visitors how to play music. They are a very joyous and friendly folk, and have turned their Monastery into a music college to help cover the cost of maintaining the Grave. The cost of learning how to be a Cathartic is inverse to your passion: if you are extremely passionate then they train you for free.

The Banner of the Sazashi - Glory and Gold for All 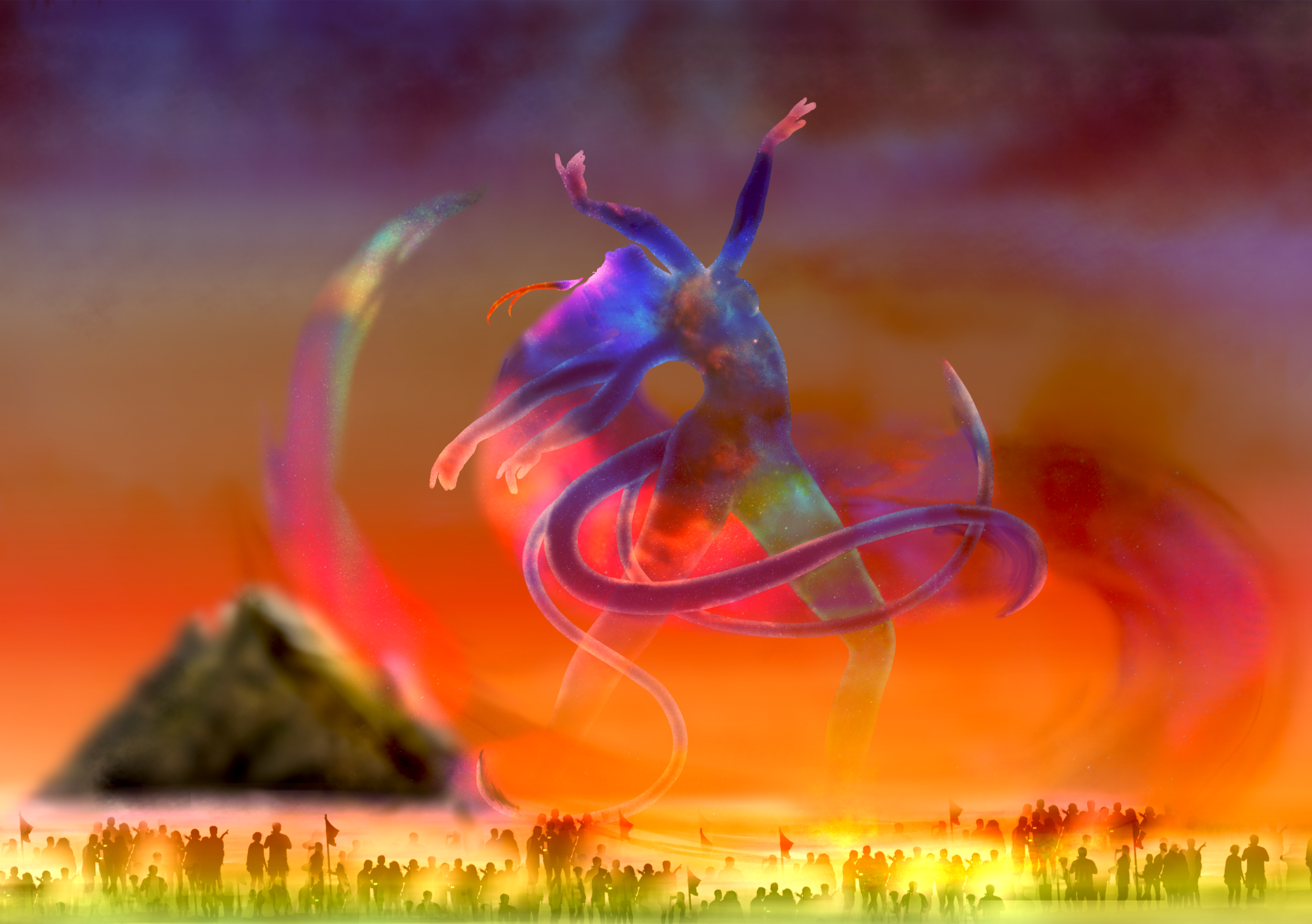 The Disintegration Loops is based on Basinski's attempts to salvage earlier recordings made on magnetic tape in the early 1980s by transferring them into digital format. However, the tape had deteriorated to the point that, as it passed by the tape head, the ferrite detached from the plastic backing and fell off.   The loops were allowed to play for extended periods as they deteriorated further, with increasing gaps and cracks in the music. These sounds were treated further with a spatializing reverb effect.   Basinski has said that he finished the project the morning of the September 11 attacks on the World Trade Center in New York City, and sat on the roof of his apartment building in Brooklyn with friends listening to the project as the World Trade Center towers collapsed.
— Wikipedia

To me, more than any other song, this is an anthem of what death and decay sounds like. No sound can encapsulate death and loss more than to realize that even harmony will eventually break and die.   This is how the Cathartic felt to lose Anthem.
Please Login in order to comment!
Powered by World Anvil