You can be certain of it, Adelai is human. All the requisite limbs are there, in the right place, and well-proportioned to boot. How is it, then, that you glean a sort of animalism from her? Where does it come from?

Is it in her languid manner? Her confident, loping gait?
No step in err, no airs put on.

Maybe it's in the piercing gaze oscillating between extrospection and introspection.
Partake, intake, consider, classify.

Perhaps it's her smile, her smirk, her panther grin—lips more often the devil's plaything than idle hands could ever be.

Perhaps the answer is in a cocktail of the three. Set them side-by-side, tilt your head, blur your eyes and you might just see the common element: raw passion peering out from under ice.

Adelai was born and raised a city girl until 15 when her family escaped increasing city violence homesteading in a backwater recently cleared and maintained by the Stjernøy Scouts. She learned to enjoy the hunting and manual labor, and adapted quickly. Constant interaction with the Scouts of her area instilled a veneration for them, and she aimed to become one.   At 19 she joined the Stjernøy Scouts. After basic her squad was sent into hazardous regions to eradicate hives and mark potential settlements. The 2 year campaign was a success and Adelai served the Scouts for another 4, during which time she realized that there were aspects of herself she didn’t understand nor was comfortable with. She ultimately quit to find a more exciting job.   At the age of 26 Adelai joined on with the New Earths Settlements Agency (NESA) and was assigned to the tail end of a Phase 3 mission on the lush, mountainous planet of Aresku IV. Her job was part scout and part missionary. She made good money and found the experience thrilling. She enjoyed interacting with the locals in particular, though was less fond of pressing the Gospel than she was of learning about their local traditions and beliefs. It was on this planet that she really matured.   After Aresku IV Adelai took a 6-month shore leave. For the first couple of months she kicked around the neutral human station Over the Rainbow, where she learned to hate the related song, made money as a bouncer, and underwent sexual-reassignment to fit how she perceived herself after interacting with the locals of Aresku IV. The rest of the time she spent on Stjernøy with her family, enjoying her hard-earned money and fresh sexuality with a summer girlfriend. They communicated mostly in moans.   After her shore leave NESA sent Adelai on a 1 year rotation of the Phase 2 reclamation of Hainan II, won in a joint bid of the Jupiter Syndicate, Hedon, and the Somnancy. Tensions among the crew exacerbated hazards presented by aggressive insectoids and extreme weather patterns lead to multiple incidental casualties (including a crew member Adelai was romantically involved with) before the crew pulled into an uneasy peace and completed the mission. Adelai, 29 at the end of the mission, became more standoffish and less eager to please. The experience left a bad taste for other Banners.   Adelai takes another 6-month shore leave (normal behavior for scouts between rotations). She spends half at home and the rest kicking from station to station, tracking down a Dermal Papillae cloak for her Raiment and burying the memories of her last mission in liquor, lovers, and a new stimcig addiction.   Just before 30, Adelai accepted the NESA contract that would forever change her life. On paper the contract read as a standard Phase 2 drop, but a maze of red tape, NDAs, and confidential documents lead Adelai to believe, rightly, that more was going on. In truth, the mission was more of a Phase 1 merged with a Phase 2, with no intention of a Phase 3. Despite the planet having no Phase 1, Ar’rusa, which The Somnancy had stolen the index to from Hedon, was to be the target of a habitat drop of 60 inhabitants across 4 habitats. Each would settle at a different location and link up not via paths on the frozen and inhospitable overworld, but via a series of supposedly terraformed tunnels running between 4 ancient empty Hedon sites. From those sites they would map the tunnels and follow them down into the main Hedon colony.   Down in that Colony they discovered the true goal of their mission: looting an ancient Hedon weapons cache. Inside they found and accidentally released a powerful bioweapon known as an Ongleon, and over the course of the next 3 weeks and a series of failed quarantines the crew dwindled as the monster grew and grow, consuming them and converting their biomass to its own.   Adelai braved going into the heart of the Ongleon to activate the emergency beacon, then struck out with a group of other survivors. The Ongleon attempted to follow them, but was ill suited for the cold and eventually held back. Adelai waited in a nearby abandoned outstation with the other survivors until help came.   Once she was out she retired from the military and has been kicking around, shoving her money in savings and instead looking for good jobs to use her skill in. She served for a bit as a big game hunter, but eventually tired of that and signed on through Halcyon Paramilitary specializes as an agency to help veterans find jobs. They helped negotiate a contract with Columbus Colonization, for a fee.

Retire with enough money that every job I have after this is a hobby job.

Adelai believes that the Somnolent is the second coming of Christ and that he was chosen by the Metatron (The Wheel) to lead humanity into an enlightened era of peace.

Adelai has a deep sense for people's emotions but sometimes can be too blunt in her approach. While she understands the social fabric she's typically a bit off-kilter with it.

She enjoys hobbies which involve 'honest sweat' and expression such as woodworking, and drawing, though she's not particularly skilled in either.

Prone to speaking slow and deliberately to counteract her accent and slur/stutter, and will often use Comms exclusively on missions as a result. 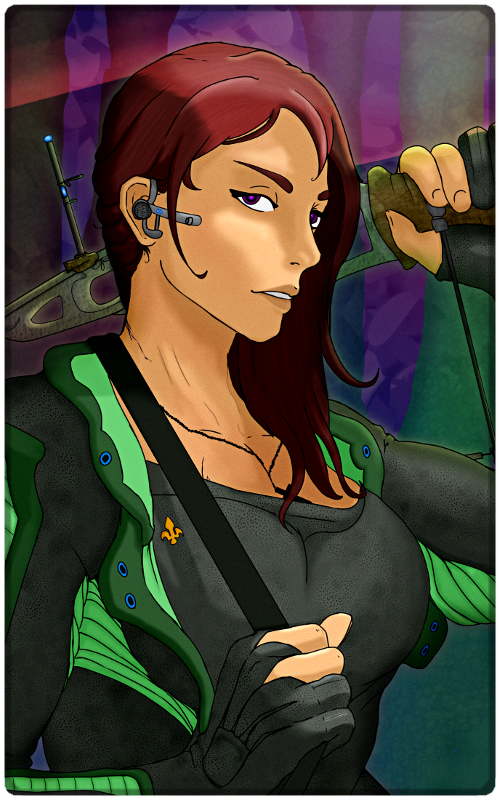 This work is licensed under a Creative Commons Attribution-NonCommercial-NoDerivatives 4.0 International License.
All content herein is owned by Ethnis and Ethnis Studios, which are owned by Ademalian Enterprises.
It is developed by Ademal and co-developed by Barron.
All other credited work is either commissioned or gifted fanwork.
For more disclaimers, read here. Credit to for the idea for a header bar!
Powered by World Anvil