The Scabbard Waste is a large wasteland east of the Crestfallen Mountains and south of the Tonarian Grasslands. The desert is considered by many to be impassable but despite the dangerous landscape, the Ahn' Kalin have mastered the sands and unrelenting heat.   Many are nomades wandering from waterholes with domesticated camels and beasts of burdens. Others take to the empire city Kemor, surrounded by great pyramids lost since the bonding and waiting to be rediscovered.

Stretching to the limits of sight, sand dunes of the desert roll on seemingly forever baked by the blazing sun. In every direction, the hollow silence of the sea of sand is both oppresive and forboding. During the day, the heavy desert air causes the air shimmer, while at night temperatures drop to near freezing with some days having an almost 80 degree temperature change.   Percipitation is generally scarce and rainfall can vary greatly from year to year with some places going years without seeing a rain drop. When rain does fall it comes in fierce short lived storms. The rainfall months are typically the winer months of Narwon, Gwaeron and Santhron. There is no rain in spring and summer months.   Small whirlwinds, called dust devils, are common as hot dry air cause instabilities resulting in the dangerous storm.

Djinn of the Scabbard Wastes are as brilliant as they are mighty, as proud as they are majestic. Haughty and decadent, they have a profound sense of entitlement that stems from the knowledge that few creatures except the gods and other Djinn can challenge their power. A Djinn is born when the soul of a sentient living creature melds with the primordial matter of an elemental plane. Only under rare circumstances does such an elemental-infused soul coalesce into a manifest form and create a Djinn.   The Scabbard Wastes are home to many Djinns who neighboring villages must pay a tithe to for protection. The Djinn offering protection usually has an influence on the culture of the village inhabitants. Those who are born in the Scabbard Wastes are often given to one of the local Djinns and annoited in the ritual associated with that specific Djinn.   The Djinn Davata is known to speak to villagers during a cool breeze. Whenever a cool breeze hits the face of the villagers it is considered a blessing to be praised.   The Djinn Khalitharius is a dangerous Djinn craving power and dominion. Khalitharius is commonly refered to as Demon of the Burning Sands for if you earn his skorn he will burn you and anything you hold dear under the heat of the sun.   The Djinn Aeradolth will bless those under his protection with a cloudy sky and the chance of rain. Many who dwell next to an oasis are under Aeradolth's protection. 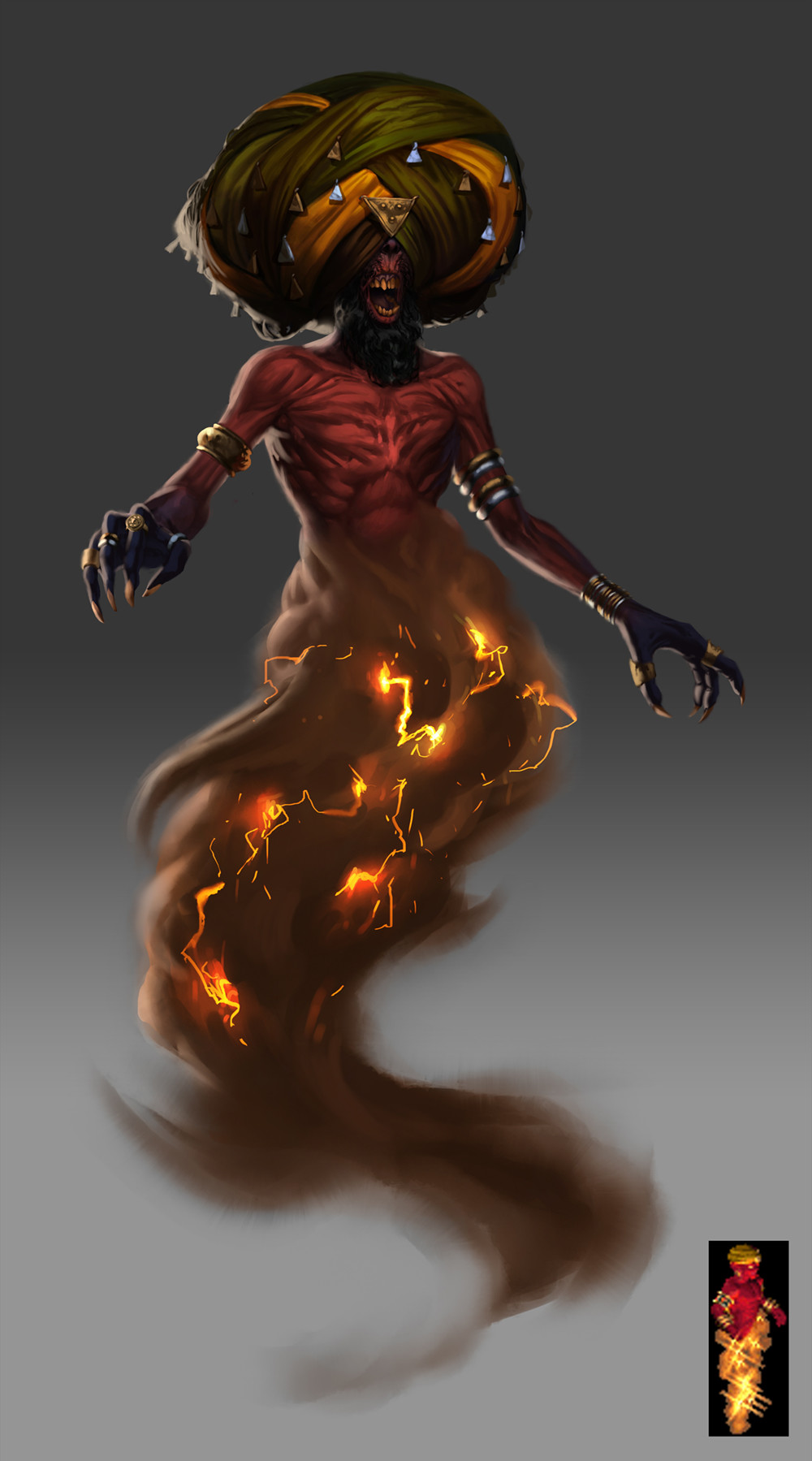