My first venture into Ignathar proved to be a fight for survival as I learned the lay of the land. My journals immediately caught fire as I stepped onto the broken landscape. To make matters worse, my squire's breastplate began to melt at what I presume to be midday. We learned quickly to travel at night when the plane cools, and that water will evaporate almost instantaneously. If you venture to Ignathar make extensive preparations.
— Hu Tai, Author of Codex Ignis

The most inhospitable elemental plane, Ignathar is a hostile landscape of crimson and fire. Ash and smog fill the air forming dark ashen clouds in the sky. These black masses move slowly overhead, choking anyone caught inside.   A blazing sun passes in a 24-hour cycle, similar to the material plane. At noon, the heat will melt unprotected metal and forces inhabitants to find shelter. At midnight, Ignathar cools slightly as the sky shade turns to a red-hued twilight. This cooling and melting pattern is common in the Plane of Fire and helps to shape the distinct geographical features.   Ignathar is dominated by a vast sea of molten lava. Fiery magma waves crash against island landmasses and rocky mountains, constantly reshaping the terrain. Inhabitants typically live deep underground in the many valleys and mountain ranges formed when the Plane of Fire cools at night.

Deep within the great volcano Agony at the center of the sea of molten lava, Volkan the Everburning rules. Little is known about Volkan. This is attributed mostly to those that meet the Everburning Elemental Lord rarely return. It is believed Volkan is sadistic and cares little for the lives of anything but himself. The immense power wielded by Volkan has thwarted any would-be challengers since the creation of Ignathar.   Volkan does command lesser fire and ash elementals through fear, crushing those who fail his agenda. He also reigns over two cities in Agony who provide protection and tithe to the Elemental Lord. The Flaming Heights is a city of fire salamanders and serves as Volkan’s army when needed. These evil fire salamanders worship Volkan, willingly laying down their lives for the Elemental Lord. 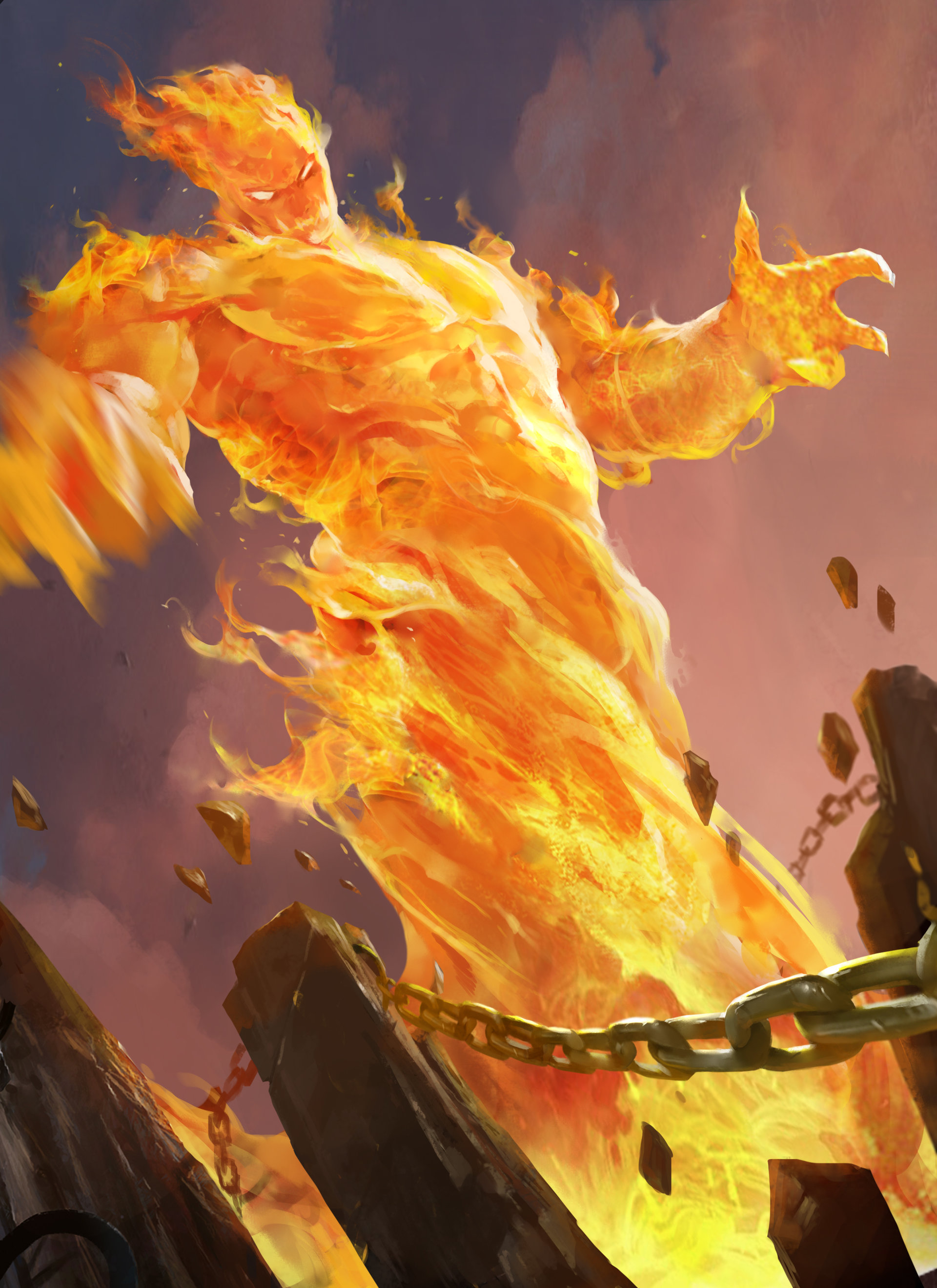 by LI qian
The Charred Apex, a city of enslaved Forge Dwarves, work tirelessly crafting weapons and armor for the Flaming Heights war effort. Every few centuries, a rebellion rises, only to be brutally destroyed by Volkan as he purges many of the Forge Dwarves. Once the devastation fades into memory, the Forge Dwarves attempt another uprising only to be crushed again. High ranking commanders in the Flaming Heights believe Volkan himself stokes the fires of rebellion for a reason to commit genocide on his Forge Dwarf slaves.   Recent documentation does show that Volkan is at war with Zarka, another powerful fire elemental attempting to wrest control of Ignathar away. A kingdom of fire giants have sided with Zarka against their former creator, and have helped to balance the scales in the war for the Plane of Fire.

The Plane of Fire shares a border with the Plane of Earth to the North and the Plane of Water to the West.   Where Fire meets Earth, a chain of violent volcanoes and wondrous mountain ranges form the planar border. Deep within these rocky expanses, the legendary Surtur city awaits. A melting pot of Earthbound Dwarfs, Forge Dwarfs, Fire Giants, and other inhabitants pay homage to the Ancient Red Dragon Kaldreoss and his infinite wisdom. Surtur City is famous for the great Titanforge Anvil and exalted blacksmiths who call the city home. Legend states that Kalator ascended thanks to the assistance of Kaldreoss in the creation of his hammer and chisel at Titanforge Anvil.   Where Fire and Water meet, the planes are highly unstable. Thick steam blinds the senses while scalding water boils anything that attempts to cross. It is critical to avoid this planar border as no forms of life outside of Steam Elementals are present. 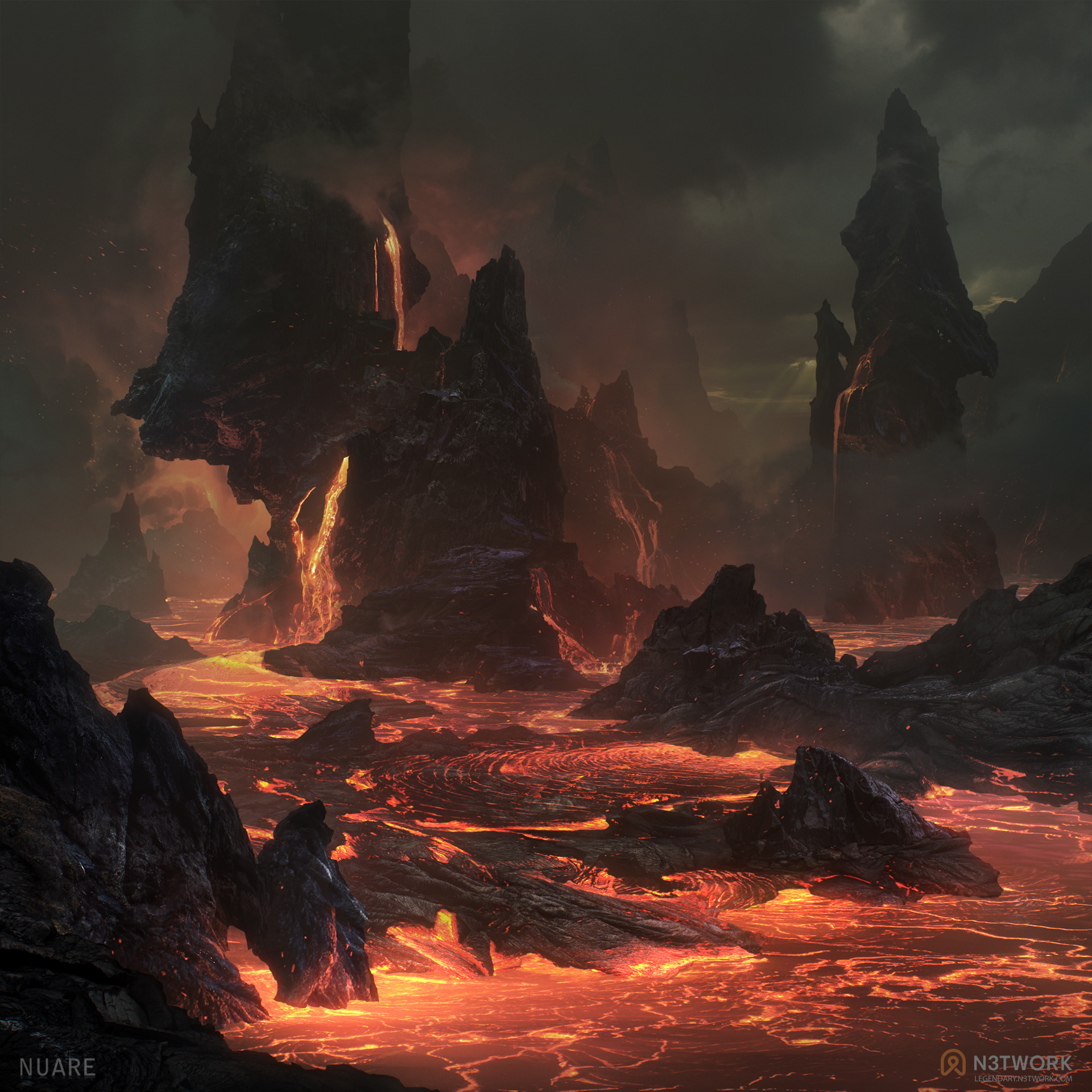 by christian dimitrov
Alternative Name(s)
Pillar of Creation, Plane of Fire
Type
Dimensional plane
Inhabiting Species
This article is available to everyone thanks to Gamingbrew Patrons and is included in Expansion Two: Speaker of the Elements.     Crafting the Elemental Planes
In the beginning, Al'Madoon created the four elemental planes as a base, such as how a painter uses prime colors to paint a masterpiece. The elemental planes were split into four quadrants surrounding the mortal plane Erenel.   Many believe because it was Al’Madoons first attempt at creation, the elemental plane design was raw and more chaotic than intended. Others stand by the viewpoint that Al’Madoon knew each plane must be chaotic to inspire the change needed to craft the mortal world. Regardless, the four elemental planes were and continue to be extremely volatile.   Al’Madoon’s celestial body being in close proximity to the planes imbued the air, earth, fire, and water landscapes. This caused chaotic reactions which spawned the first known elementals. Powerful elemental beings began roaming their corresponding planes vying for power. One primordial elemental from each plane eventually took control subjecting the weaker elementals under their rule. Al’Madoon was too busy with his newest creation, Erenel, to care.

Available for everyone courtesy of Gamingbrew Patrons

You were once a slave serving the Elemental Lord Volkan the Everburning on Ignathar. Freedom was only a dream until something astonishing happened and you were able to escape Charred Apex. Finding freedom, you've kept your broken shackles as a reminder of the hardships you endured under the tortuous gaze of Volkan and where you wish to go in the future.

You were once a slave serving the Elemental Lord Volkan the Everburning on Ignathar. Freedom was only a dream until something astonishing happened and you were able to escape Charred Apex. Finding freedom, you've kept your broken shackles as a reminder of the hardships you endured under the tortuous gaze of Volkan and where you wish to go in the future.

You spent a part of your life in the Plane of Fire and have a basic understanding of the Pillars of Creation. As part of your escape, you know where to find one working portal to return to Ignathar and the common dangers associated with traveling on the plane.

This work is licensed under a Creative Commons Attribution-NonCommercial-NoDerivatives 4.0 International License.
The Erenel Fictional Universe is presented under the OGL rules for 5th edition. All artists have been duly credited.If you would like to have your art removed, please contact me immediately.
System Reference Document 5.1 Copyright 2016, Wizards of the Coast, Inc.; Authors Mike Mearls, Jeremy Crawford, Chris Perkins, Rodney Thompson, Peter Lee, James Wyatt, Robert J. Schwalb, Bruce R. Cordell, Chris Sims, and Steve Townshend, based on original material by E. Gary Gygax and Dave Arneson. A special thank you to the many talented people who create the world's greatest role playing game.
Cover image: by hongqi zhang