When the Caelian Warlord Idhelm the Conqueror began his bloody conquest of Northern Tonarian in the late 400s, many Caelian families fled south to the Mistwood. As they watched their homelands burn and their compatriots slaughtered, they swore an oath of honor.   Centuries later, their commitment has blossomed into the Axelords, a fighting force of the most skilled axe warriors sworn to defend their homeland.

The number listed in the description represents the location on the H'rasis map.

(7) A wealthy Ursus clan led by Wodvir Burrows recently purchased an entire quarter’s worth of property. Since then, the area has slowly grown into a street of fine shops, lodging and exotic goods. At first, the H’rasis locals looked quizzically at Burrows Villa. However, they’ve slowly begun to welcome the Burrows into the community, primarily due to the Burrow’s hospitality and extreme kindness.

(8) H’rasis has a beautiful lake landscape opposite the Mistwood. The large bay serves as an excellent source of food.

(2) A hunting guild, the Falconeers take advantage of the ample game provided by the Mistwood. Entering the guildhall unseen is almost impossible as multiple Falcons patrol the skies above, roosting on the guildhall’s roof. Under the covered roof, small windows are used by Falcons to enter and exit quickly.

(6) During the week, the market square is filled with tradespeople selling respectable wares. Leatherworkers, trappers, tailors and more line the streets with small carts. In the center of the market square, a large stone slab acts as a stage. At weeks end, the market square will fill with axemen and axewomen ready to take center stage and duel. It would seem the city does its best to clean the stone slab with only minor crimson stains dotting the stone stage.

(1) The largest temple in the city belongs to Odger the Storm Claw. Sanctuaries Rise also doubles as a functional clinic with a detached plague house at the edge of the property.

(9) A collection of taverns and inns welcome travelers as they walk the cobbled roads into the small city. Mixed among the establishments are dozens of two-story homes made of wood with stone foundations. Small wells dot the area mixed in alleyways for multiple homes to share and serve as literal watering holes for gossip.

(5) Overlooking the cliff for all to see, the gnome Thalla maintains the clocktower, which bears her family name. A local superstition states challenging anyone to a duel, while the clocktower chimes, leave its curse on your axeblade. Doing so dooms you to lose however many contests the clocktower chimed during your foolishness.

(4) In the center of the town, a large cliff face rises above the lake. The four Axelords each own a large amount of property at the top of the hill, with the current leader occupying a walled stone castle at its peak. Here, the red colors of Adair fly and their sizable militia quarters. Watchtowers protect all sides, a lesson learned from the Hill Giant attack decades prior. Here the Falconeers watch for threats from the adjacent bay and Mistwood’s edge, ready to light signal fires and quarter all of H’rasis’s citizens behind their reinforced walls.

Meritocracy. Currently ruled by the Axelord Gwyndolin Adair, the famous daughter of Axelord Fehriah Adair. Gwyndolin claims rulership will pass to the hands of whoever can defeat her in a fair contest. None have yet to best her fighting skill.   A High Council of Axelords officially advice Gwyndolin and provide protection against the many threats from the Mistwood and neighboring kingdoms. H'rasis has no army; rather, each Axelord fields its own militia, flies its own colors and competes with one another for the right to provide security and other necessary duties.   Gwyndolin skillfully balances the politics needed to protect the city, partially thanks to a treaty her mother made decades earlier with the Hill Giant Chieftain Hugragrus.

Thanks to its location and lack of water transport, H’rasis is not a thriving trade city. The city serves as a hangover for most traders on their way south to Marsonia and Lithelle. Despite this, H’rasis is known for exporting meats, livestock, high-quality hides and tanned leather. While they also benefit from their prime timber location, most timber is used domestically. The Axelords currently have little interest in exporting it.

Four Axelords currently call H'rasis home. Although each Axelord has its own desires, militia, and house colors, all Axelords are bound by an Oath of Honor to protect their ancestor's homeland.

Son of the former ruler Bredon Cadhan, Maccus has attempted and lost on multiple occasions to Gwyndolin in hopes of reclaiming his fathers throne. Cadhan Axelords show allegiance by wearing gold.

H'rasis's rising star thanks to her fearlessness to rush ahead in combat. Nuallin Axelords show allegiance by wearing green.

The largest militia belongs to the famous Malduin lineage, which can be traced back to the first century. Malduin Axelords show allegiance by wearing purple.

A love for dueling is at the center of H’rasis culture. Each month, a publication is spread throughout the streets, displaying the previous month’s duel results. This simple publication directly results in the rise and fall of fortunes, with its release almost becoming a holiday.   At week’s end, the market square is filled with axemen and axewomen ready to prove themselves in front of cheering crowds. Most often, the people of H’rasis do not wish to create lifelong enemies, and almost all duels do not lead to death. Instead, the two parties must agree on a win condition, or the contest is not seen as legitimate in the eyes of the Axelords. Win conditions can include but are not limited to first blood, first to concede, and first to be knocked unconscious.   All duels must be witnessed by at least two accomplices for both parties; otherwise, any fatalities resulting from the contest are considered murder. The sport of dueling is meant for all to see, enjoy, and gossip over.

In spring of 561 EoBO, a horde of hill giants came down from the north, manipulated by the sorcerer Lirithak into believing that the city had been responsible for a recent string of giant folk murders. The Hill Giant Chieftain Hugragrus led the siege with surprising swiftness and cunning. Great trees had been hewn as battering rams to beat against the main gate, while dozens of giants hurled massive stones down from a nearby hill. The city was well fortified and stocked, so the siege lasted for several months. As the summer heat began to take its toll on both sides, it was clear that a complex stalemate was reached.   At the time, the most famous Axelord was a woman named Fehriah. Fehriah correctly suspected something more behind this seemingly unprovoked attack. She sent emissaries to the giants to see if a truce could be established to discuss the matter. After a few tense hours, the giants finally agreed.   As Axelord Fehriah was preparing to meet Hugragris, the Axelord ruled of H'rasis, Bredon Cadhan, presented her with a cloak pin that had been in his family for countless centuries. The Axelord's intent was to impress the giants and impart Fehriah with the authority of the city. The meeting looked almost comical from a distance. The hill giant chieftain stood looking down at the human axelord, who stood only a little over five feet tall. As the discussion began, Fehriah managed to impress the giant with her knowledge of their language and people. Hugragrus soon became convinced by her words. 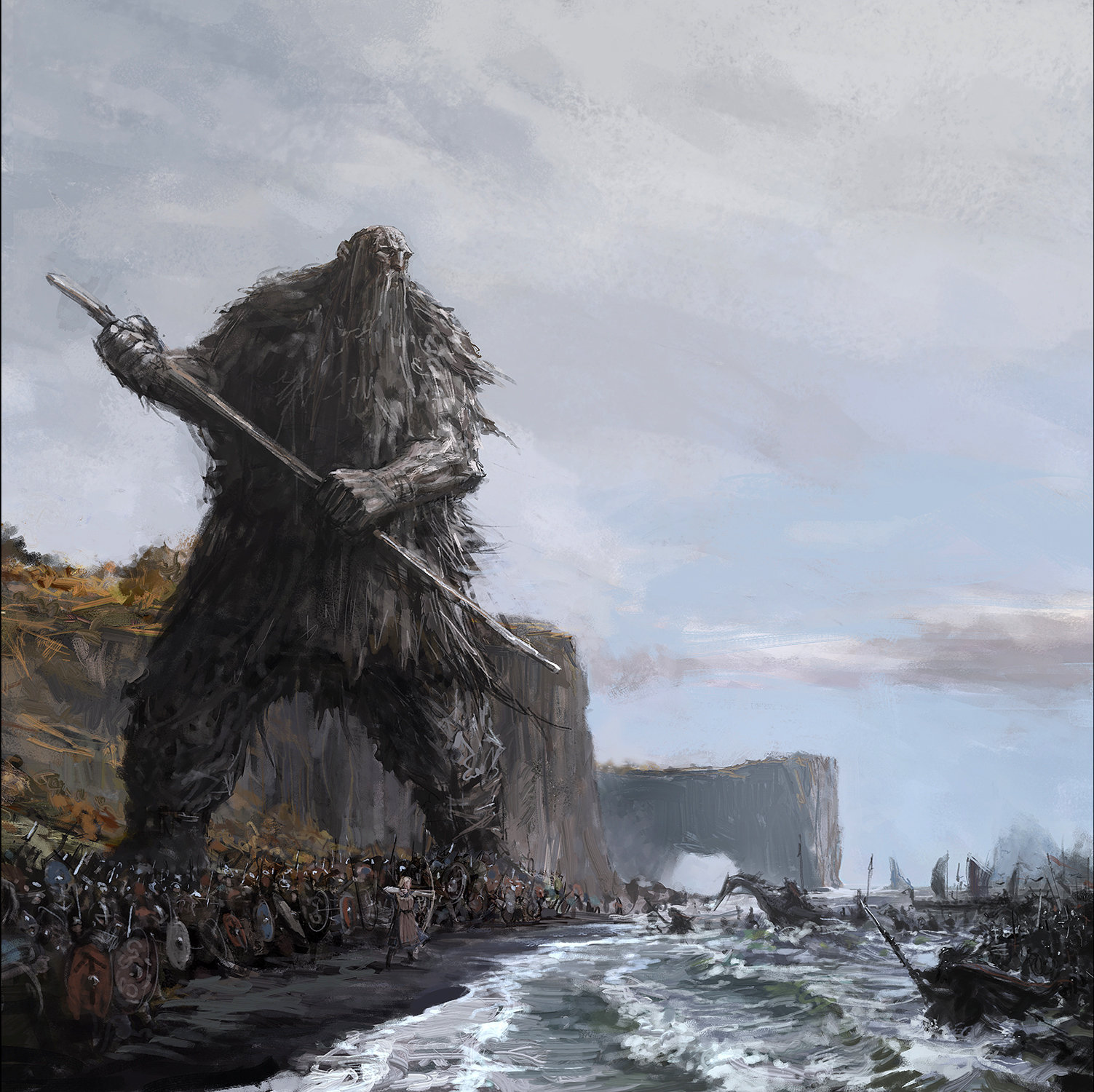 Watching from a distance, Lirithak could see his plans slipping through his fingertips. In desperation, he hurled a bolt of lightning at the unsuspecting Fehriah, striking her directly in the chest. She was thrown backward to the ground, and the field erupted into chaos. The clever Hugragrus realized the source of the treachery. Before the situation could break down further, the chieftain launched a massive spear at the evil sorcerer, impaling him through the chest.   Fehriah's men approached to see to their captain, and to their surprise, they discovered that she was still alive. The bolt of lightning had struck her directly on the cloak pin, blackening and warping it but dispersing the worst of the attack.   Chieftain Hugragrus regarded her survival as a sign that the gods clearly favored these people. That night, a great feast was held, and friendships sealed between the City of H'rasis and the Hill Giants. Hugragris swore that as long as his family led the giant clan, they would-be allies.
H'rasis
Open full size
Settlements

This work is licensed under a Creative Commons Attribution-NonCommercial-NoDerivatives 4.0 International License.
The Erenel Fictional Universe is presented under the OGL rules for 5th edition. All artists have been duly credited.If you would like to have your art removed, please contact me immediately.
System Reference Document 5.1 Copyright 2016, Wizards of the Coast, Inc.; Authors Mike Mearls, Jeremy Crawford, Chris Perkins, Rodney Thompson, Peter Lee, James Wyatt, Robert J. Schwalb, Bruce R. Cordell, Chris Sims, and Steve Townshend, based on original material by E. Gary Gygax and Dave Arneson. A special thank you to the many talented people who create the world's greatest role playing game.
Cover image: by Cmy Cai