Once the most widespread and influential race in Erenel, Elves are a race full of beauty and graces. Now, they are a people secluded, and face the backlash of their ancestors choices following the rebirth of Erenel and Elturel's fall.
To be an Elf in the Era of the Bonded One (EoBO), is to live in seclusion away from the disdain of Human Kingdoms. The remaining Elf societies cling to their old ways, frightened of the backlash they will face or too stubborn to ask for help and admit fault for their failings.   Made in the image of Al'Madoon as his chosen people before their fall from grace, Elves are creatures of magic. Many take naturally to tethering the bond and feel strong ties to nature.   As one feels the warmth of the sun shining on a summer's day, Elves feel the warmth from their creators spiritual being as it blankets Erenel. When the bond is misused around an Elf, it feels as if splinters are pricking their skin as they share in the pain. This natural affinity drives many Elves to be forest caretakers, protectors of wild beasts or guardians of great fonts of power.

With their gifted grace and slim features, Elves appear hauntingly beautiful when compared to other races. Male and Female Elves are more slender than humans, weighing only 100 to 160 pounds and can stand over 6 feet. Males Elves are only marginally heavier and taller than females.   Elves typically have light or no facial hair and little body hair with long pointed ears and sharp features. Their eyes are naturally piercing, and they can see quite well in dim and dark conditions. Blessed with keen senses, they are highly perceptive and spot things frequently missed by other races.

Unlike the other races of Erenel, Elves don't sleep. Instead, for four hours each night they enter a meditative like state, during which they remain semiconscious, as their mind "floats in the Trance: Plane of Eternal Glade and connects with Al'Madoon in his subconscious state.   It is here in the Trance where an Elves spirit is taken after they die. The spirit must be granted admission to once again walk with their ancestors and revel in the Creator's psyche. Elves who believe in peace after death spend their long lives atoning while others may follow the path of Elturel or look for another means of life after death.

An Elf is considered a child by other Elves until their hundredth birthday. During their first century on Erenel, they are given a one syllable child's name. On their hundredth birthday and the declaration of adulthood their child's name is extended and more responsibilities awarded.   Children Name Examples: Ael, Cael, Cy, Gael, Nim, Sai
Adulthood Names: Aelwynn Caelador, Cyennal, Gaelindann, Nim'eral, Saiveliss

Birth of the Elves

Al'Madoon created the Elven race, full of otherworldly grace in his image. After carefully sculpting and molding his prized creation, Al’Madoon breathed a portion of his own magical being into their souls. The creator looked down on his fully realized masterpiece and for the first time since the beginning, took a full rest.   Al’Madoon rested for centuries before opening his eyes once again. Upon waking, the Creator was horrified with what he saw. His masterpiece, the Elves, had used his blessing to subject the world of Erenel to their whim. Crazed with power one Elf stood mighty and defiant above all. Elturel the Fallen.

Elturel the Fallen was the first to be granted breath by Al’Madoon during creation. The mad but charismatic Fallen Elf had manipulated, murdered and forced his way to not only the title, King of the Elves, but King of Erenel. Worse yet, Elturel had grown in such strength his power almost rivaled the Creator.   Al’Madoon would not allow Erenel to be thwarted by an evil he accidentally fostered. It was then that the Creator would sacrifice his being and bond with the world he loved.   Elturel was aware of the danger facing his kingdom and in a violent attempt to stop Al’Madoon attacked his Creator. In a bright flash of light Al’Madoon and Elturel collided as Al’Madoon’s celestial form exploded. Erenel, caught in the sudden eruption of celestial force, became suspended in a time lapse. Centuries of advancement, powerful artifacts, and sprawling kingdoms would fade away. Eventually, the time lapse ceased and the races opened their eyes for what felt like the first time. In the wake of Al'Madoon's sacrifice, a new world bonded to their creator and its inhabitants now search for answers. 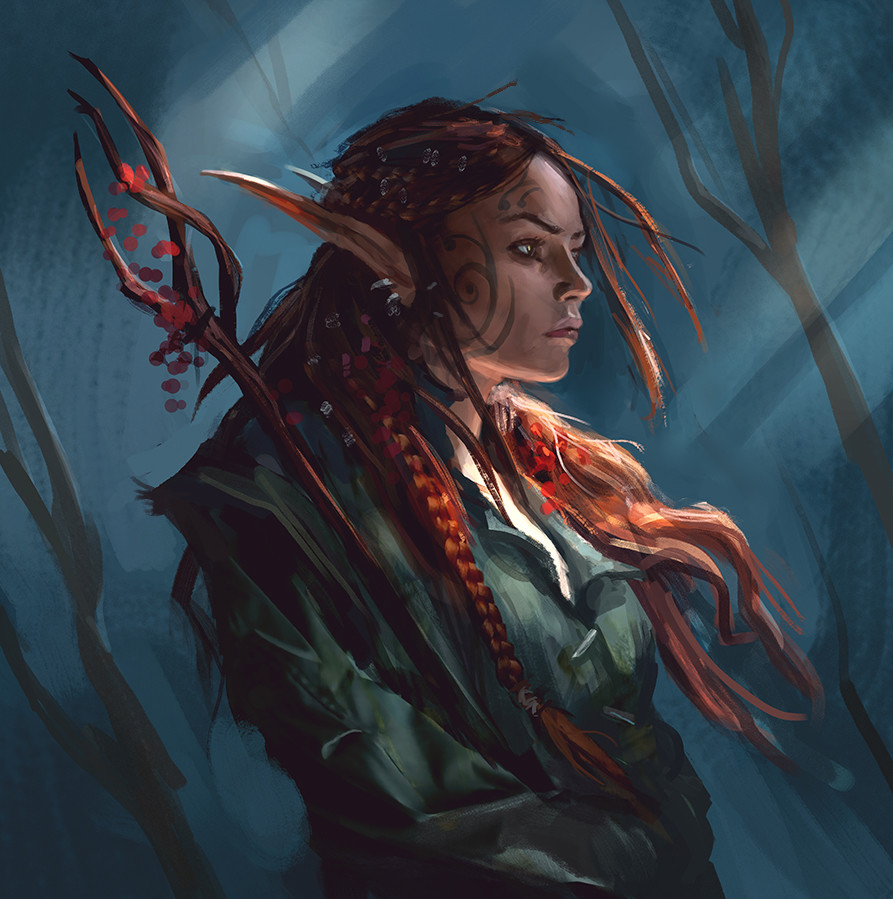 Elves typically keep to themselves out of shame or stubbornness for their past transgressions. However, humans are an adaptable and curious race. Many of which seek out Elf homesteads in hope of gaining enlightment from the time before the Era of the Bonded One (EoBO).   These humans are "enlightened" from a distinct rune etched on their back or shoulder during the infamous Ritual of Iswa and become Elf-Like. Humans who successfully complete the Ritual of Iswa are known as Nolimon. Their bodies become more graceful and elegant. Theirs ears lengthen and they began to feel a natural affinity to the bond similar to Elves though not as prominent. 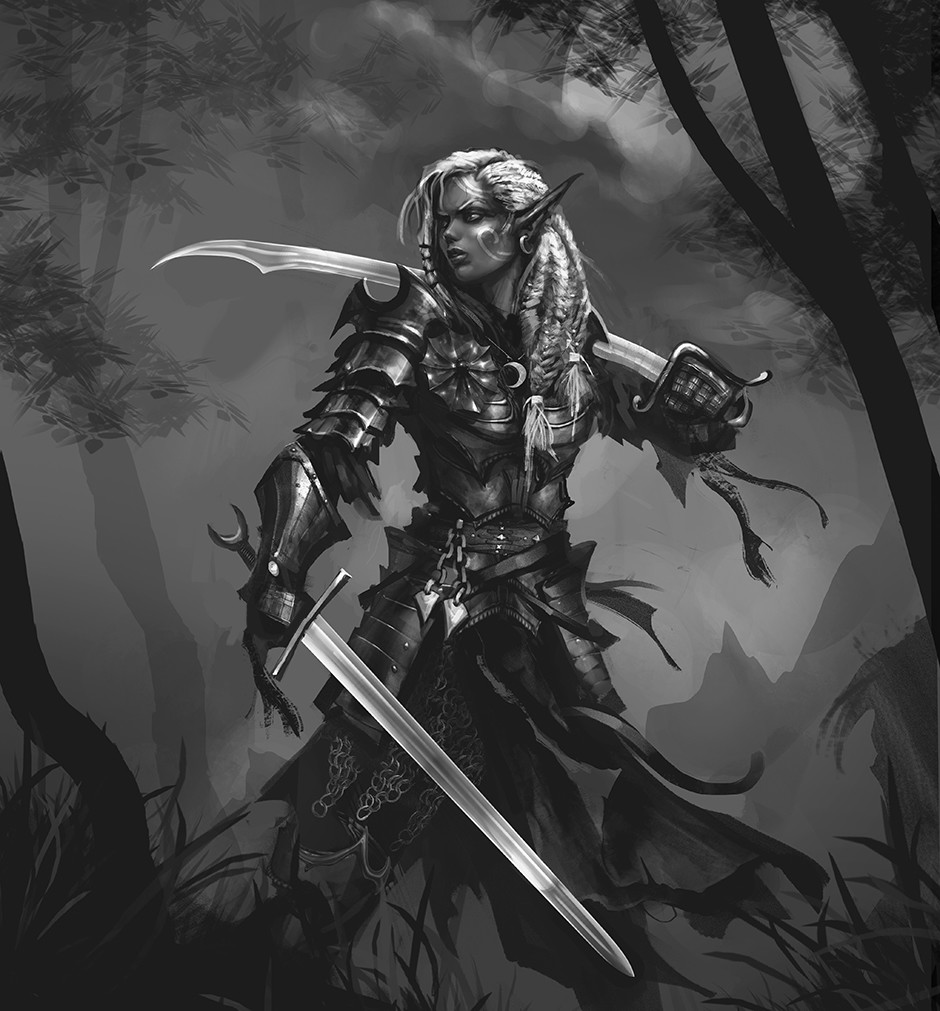 Your Elf character has a variety of natural abilities common with your ancestry. You will also pick one of the available sub races below. Elf 5E Racial Traits

Accustomed to twilight forests and the night sky, you have superior vision in dark and dim conditions. You can see in dim light within 60 feet of you as if it were bright light, and in darkness as if it were dim light. You can’t discern color in darkness, only shades of gray.

You have proficiency in the Perception skill.

You can feel a warm aura whenever one or more magical objects are within 5 ft of you. You can also cast the identify spell, requiring no verbal or material components, once per long rest. If you are not otherwise a spell caster, you do not learn the name or details, but you do gain a general understanding of the effects.

Elves don’t need to sleep. Instead, they meditate deeply, remaining semiconscious, for 4 hours a day. After resting in this way, you gain the same benefit that other races do from 8 hours of sleep.

Elves are divided into three main subraces: Moon Elf, Sun Elf and Wood Elf. Choose one of the subraces presented below.

Moon Elves are the most impulsive, with a strong distaste for complacency or isolation. Moon Elves longed to be on the road, traveling and exploring the untamed wilderness that lay between cities and nations.

Moon Elves have pale skin with a bluish tint. Their hair runs the gamut of human colors, but most have hair of silvery white or various shades of blue. Their eyes are typically blue or green.

You have proficiency with rapiers, shortswords, and hand crossbows.

Languages. You can speak, read, and write one extra language of your choice.

Sun Elves or "Golden Elves," have a reputation for being arrogant. Sun Elves believe the other races, even other Elves, are subordinate to them in skill and significance. Some Sun Elves reject this way of thinking, but it is common enough to where many races avoid Sun Elves for their attitude.

Sun Elves have glowing bronze skin. Their eyes are often metallic gold or silver, and their hair is black, metallic copper or golden blonde.

You know one cantrip of your choice from the wizard spell list. Intelligence is your spell casting ability for it.

Languages. You can speak, read, and write one extra language of your choice

Wood Elves are the most common sub-race of Elf in Erenel and tend to be hardier than their cousins. Most Wood Elves are more forgiving and cautious with their past transgressions but prefer to stay among their kind or follow a nomadic lifestyle.

Wood Elf skin tends to be copperish in hue, sometimes with traces of green. Their hair trends toward browns and blacks, but it is occasionally red or copper-colored. Their eyes are green, brown, or hazel.

Your base walking speed increases to 35 ft.

You have proficiency with the shortsword, shortbow, and longbow.

Available only for Gamingbrew Patrons. If you are a Patron the sub race will appear below. Support Erenel
Dwarf
Races
Gnome