Zio is the son of an Orc warrior who raped a magma dragon in a display of power, but met his end shortly after upon her claws. Zio's mother was slain a few weeks later by a group of mercenaries who were hired to remove a problem dragon in the area. His mentor Grut Kolten'vosk raised him in the mercenary band. When he was old enough to fight he proved himself a valuable member of the band. During a siege one day they where at the last rope and needed to break the siege or the job would be unfinished. Zio took a sledge wading through a flurry of arrows and cracked the mighty gate allowing his fellows to flood the keep. Zio has been at the site of many battlefields and served as guard to many nobles earning a fair reputation. He set out to make his own mercenary band after the Gynthar's Knights disbanded two years ago. Zio knows no life but that of the mercenary and it is one that he loves dearly.

The large half-dragon breast is bare laced with scars along his thick hide. The power of his stance would make the greatest warriors balk.

Coal black scales encase his form, with cracks of embering veins like magma running over his body.

His eyes are like smoldering orbs of flame, his features sharp and jagged. His teeth resemble the fangs of his draconic kin.

Right-handed, His stance is always warm and heroic like he's on display.

Zio believes one should do what is right even if its not the popular option. He rarely lies as truth provides great clarity. Zio's sees tests of his mettle to be the greatest challenge and the pursuit of such tests to be the greatest virtue.

Found his own mercenary band, be the greatest warrior ever known

Dislikes using magic when he can do something himself, loves learning new techniques, loves the heat of battle

Boastful, Loud, Honest to a Fault

Zio is loud and boisterous, most often he speaks in the first person, his voice is warm and welcoming, with a thick accent akin to a Russian accent, he often uses phrases like "my Friend", upon first meeting he introduces himself as "Zio, The Dragon at the Gate" but will rarely repeat the nickname 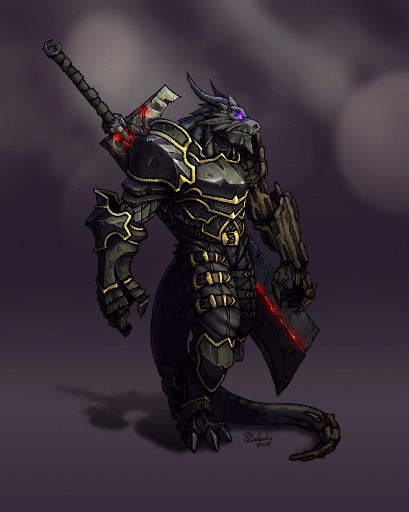