Kujots was born and reared in Brastlewark. Though this largest of Gnome cities is located within the borders of Cheliax, it is largely untethered and autonomous. Cheliax’s rulers generally consider it too valuable a source of arcane and technological knowledge to endanger by strict rule. Still, many of the residents of Brastlewark are apprehensive about the long term intentions their devil-worshiping neighbors. This apprehension causes many to shun those who are deemed to be too involved with Cheliaxians. Kujots family is somewhat outcast because they apply their ample roguish skills in the employ of various noble houses of Cheliax to aid them in their maneuvering within Cheliax’s complex political and social order. Unknown to all but a few outside the family however, is their true mission to use the access to Cheliaxian internal politics to surreptitiously aid the Cheliaxian resistance movement against to the current Asmodeus influenced rulership. In spite of the social stigma applied to her family, Kujots at a young age became close friends with Kyine, a member of one of the most respected families of Brastlewark. His family was highly skilled in metallurgy and metal crafting making them great assets to both Brastlewark and Cheliax. Over time Kujots and Kyine became sweethearts and finally over his family’s strong objections they were engaged to be married. As they approached maturity and the age at which they could marry, an odd bump formed on Kujots’s nose. The bump grew into a full- fledged snood revealing the presence of some fiendish ancestor in her families past. Since this development meant introducing this fiendish heritage into the family bloodline, Kyine could no longer overlook the objections of his family. He broke off the engagement. Because of love, sympathy, and guilt Kyine gave Kujots a parting gift. This gift was a superbly crafted copper mask he made for her to use to cover the snood. He crafted the mask from the copper binding and decorations of a baby cradle that had been passed down in his family for generations. Only the first born child of the first born child in the line was reared using that cradle. Family lore claimed all those reared in the cradle became the greatest metal smiths of their generation. He felt she should have some token of what their life together was to have been. Though he replaced the copper of the cradle with identical silver fixtures, his family was furious and blamed Kujots for the affront. The distraught Kujots poured all her energy into her family’s service to Cheliax. The exquisite craftsmanship of the mask aided in the social aspects of the occupation while her fiendish heritage aided in the clandestine aspects. These factors along with the lifetime of training provided by her family allowed her to become extremely successful. Such adroitness in one so young brought her a measure of notoriety. She found that the notoriety brought only more disdain to her family and Kyine. She decided it would be best for all if she left Brastlewark and Cheliax behind. Following her sister’s advice, Kujots made a nearby monastery of Kelinahat, whom the family secretly worshiped, the first destination of her self-imposed exile. Her stay at the monastery brought her a level of serenity she had not felt since her misfortune began. She was able to aid the monks in eliminating the threat posed by a local criminal, incidentally also a tiefling. As part of the repayment for this service the monks taught her some of their martial skills. This indoctrination was so fulfilling that she has since devoted herself to that lifestyle. Wandering from monastery to monastery aiding the resident monks in whatever endeavor she can. Though this has brought contentment to her life, she has also found that she must obtain a modicum of personal gratification on a regular basis or become quite despondent. Today she was making the trek to a remote monastery near the Fogscar Mountains which had contacted her about a need for her services when there was a blinding flash of light and she was suddenly falling to only Kelinahat knows where. 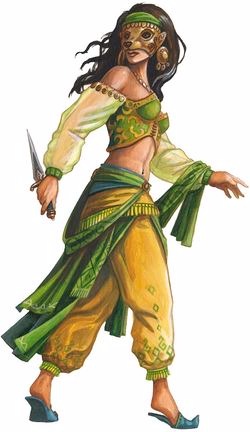