"What do you scoff at? Warrior's Wine is a legendary drink for the strong-willed and stout-hearted."
"You mean those with resolve of steel and stomachs of iron. If you fail to find your glorious death on the battlefield, a barmaid will bring it to you in a cup."
"I haven't the faintest idea what you're implying, my friend, Warrior's Wine is naught but a bracing drink for the wandering adventurer."
"If Warrior's Wine is bracing, I dread to know what you consider a strong drink."
— An excerpt from Act I of 'The Merriers and the Battle of a hundred Swords'

more commonly known as Warrior's Wine, is a famous wine brewed by the Knights of Yaosing at the Third Temple of Yaosing in southern [Lleeld]. Mordel Wine is very different from all other recipes that include [Mordel] berries, of which there are many, as Mordel berries have strong alchemical properties: nothing is done to reduce their incredible potency--and incredibly sour taste.   Mordel Wine is a particular favorite with warriors to drink before battle as the healing powers of the Mordel berries enhances their strength and helps prevent the development of infections if they are wounded. The difficulty is only the staunchest warrior can knock back even one sip of Mordel Wine without making the most hilarious of faces and coughing heavily. As with anything made with fresh, undried Mordel berries, there is also the possibility of convulsions, though this possibility decreases with exposure.   [Dragonkin] SHOULD NOT drink Mordel Wine as Mordel berries are highly flammable! 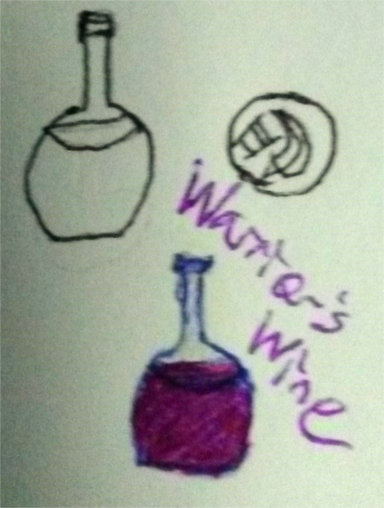 Mordel wine is a very deep purple color, several shades darker than Mordel berries themselves. While the size and shape of the bottles it is packaged in vary, they are always stamped with Yaosing's feather on the bottom.

Sharply acidic and vaguely smokey with a bright, semi-sweet undertone

Mordel wine is thicker than the average wine, sometimes syrupy in advanced age.

Real warriors can down Mordel Wine on empty stomachs.

Due to the importance of winemaking to the local economy of Atrd, much of the community has become structured around the process of winemaking.

Item type
Consumable, Food / Drink
Manufacturer
Knights of Yaosing
Rarity
Mordel Wine is most easily found in establishments owned, operated, or nearby places owned or operated by the Knights of Yaosing. Most taverns of means in Lleeds also keep at least one bottle of Mordel Wine in their cellars as it is also a particular favorite of those seeking to humiliate anyone foolish enough to accept a dare or acknowledge a debt to them.   Mordel Wine is unlikely to be found outside of Humankind settlements.
Base Price
3 silver per glass, 2 gold per bottle
Raw materials & Components
Tools

Roll 1 success die(d6) + Athletics for a TN of 10 (no bonus for a natural 6). Regardless of outcome, if a character is Miserable, make a Corruption roll for +1 Shadow. Characters who are Wounded or Exhausted automatically fail.

Gain [Mordel's Blessing], which lasts for one Adventuring phase or until the character becomes Exhausted.

Gain [Mordel's Curse], which lasts for one Adventuring phase, or can be dispelled with a Healing roll at TN 17.
If the failed roll was less than 5 total, also roll the Feat die(d12): Gandalf rune(12) no Endurance damage is taken during Mordel's Curse, Eye of Sauron (11) the character experiences convulsions for an additional -1 Endurance, all other rolls have no effect.

Cover image photograph by Daniel Vogel on Unsplash, with minor edits by the author.
This article was written for the Food, Glorious Food! Challenge

I love that the manufacturing process is tied in with a village's traditions! Has Atrd experienced any foreboding harvests or has their land only seen abundance?