The yellow gnat is an insect that lives in the Orage Mountains at the border between the areas affected by magical storms and the local Estates. It lives in swamps, with each colony of insect forming buzzing "clouds" above stagnant water.   The yellow gnat is an insect similar to a small fly. It has distinctive yellow strips on its body and a trump that it uses to pierce the skin of its prey and drink blood. It feeds on mammals and will attack anyone that comes nearby. The animal itself is annoying but is unlikely to cause significant damage to human as it only takes a small amount of blood. The only risk is if a person stays exposed to them for a long stretch of time - hours - as then the cloud of gnats has time to take enough blood to make someone faint.   With those characteristics, yellow gnats are not different from any other types of gnats that can be found throughout the empire. What differentiates them from others is the adaptations they have evolved to survive the proximity of the magical storms. While not as impressive as that of animals living fully in the mountains, it does allow them to fight back against the virus of the sweats disease by being able to cut through its envelope.   Thanks to this, the gnat is barely affected by the presence of the virus. What this means, however, is that the gnat will not die quickly from being infected and that it can continue to carry a dormant version of the virus from the rest of its life, contaminating all of its next victims. 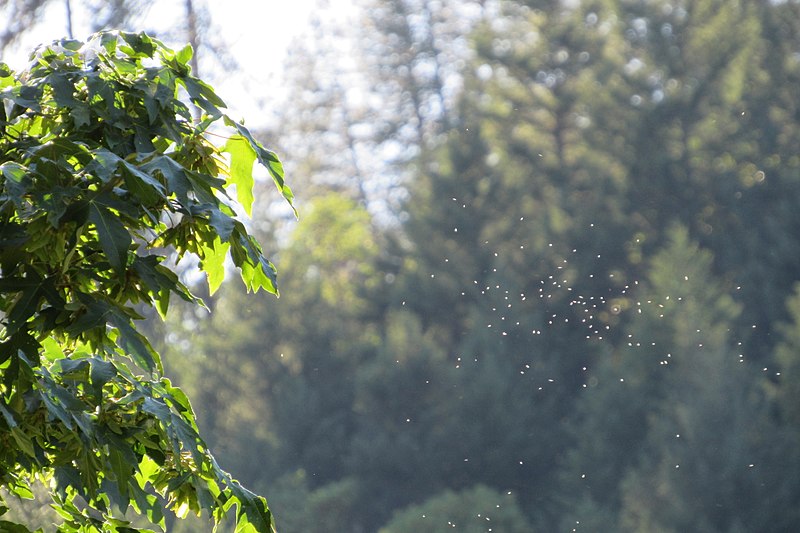 Cloud of gnats by John the Absurd on Wikimedia Commons


Lucien Merisse checked that nobody was looking before he slipped in between the trees. He ruffled through the brush, but there was no sign of the ball anywhere! Marie would not be happy at all if he had somehow managed to lose another one so soon. Lucien's mother always told him not to let himself be intimidated by the servant, but that was easy to say! Marie was more fearsome than ancestor-spectres!   And she did not want him to play with "peasants' children", but all the proper people he was supposed to make friends with were stuck up and boring, and he may or may not have lied about where he was going today and he was going to be in so much troubles when she would find out, which she would when she would use magic to find his ball!   Lucien bit his lips and forced his way through the bush. It could not have gone that far, really! Despite what Tom thought, he was not that strong!   Some more bushes were murdered to make way for him, and then he emerged from the trees with relief. Finally! Ah! And his golden ball was there, just caught in the roots of a big tree that was growing next to the river. How lucky that it had not got in, or he would have had to get wet and that would not have been very discreet!   Lucien hurried forwards, taking care not to slip on the wet and mossy roots he had to walk on. He picked up the ball, reflexively checking that it was undamaged despite knowing it had enough magic to protect it against anything.   But he better get back quickly or he would end up getting caught!   He was turning back towards the path he had made through the trees when a buzzing sound caught his attention. Before he had the time to react, he felt pinches on his arms. A buzzing yellow-black cloud appeared in the corner of his eyes.   The gnats!   He bent forwards, closed his eyes, and run away without care of where he was going.


Bite marks were impossible to hide, and Marie did ground him in the end.

If you want to read more about Lady Merisse's and her son Lucien's story, you can go here:

Thanks :D Lucien's POV was really fun to write XD and thanks for pointing out those typos :p

Rest in peace, bushes.   I do not want to sleep anywhere near where a cloud of these might be. They'd suck all of my blood. D:

Blood sucking insects are the worst! I'm terrified of them! D:

Awww poor Lucien, after all that careful effort not to be caught! XD Love his POV; you've captured those child-like priorities well! I definitely would not want to be around those gnats for HOURS, oh no!

Thanks :D Little Lucien was really fun to write!