Before a cure was discovered, the condition known as Marsh-Eye was feared by many outside of Shiarun. The marshes of Shiarun were already known as a hard and dangerous place, either to travel or reside in. Yet the rise of Marsh-Eye leant the location a further edge of dread. In the beginning there was such a mystery over how the disease was contracted and transmitted that travellers passing through the marshes feared it was the work of malicious water spirits. Others wondered if it was a ploy of the marshfolk to keep outsiders out of their lands. Eventually the source was discovered to be a plant that released spores whenever a strong gust of wind, rain or movement disturbed it. When inhaled, these spores will cling to the back of the throat and result in a fungal infection of the lacrimal gland. The first undeniable proof of the infection is a film that forms over the eye which, if left untreated, will gradually thicken and eventually render the afflicted almost blind. The main reason this condition is feared is for the hallucinations that the infection produces.


During this initial stage, the afflicted will catch glimpses of movement and shadows just at the edge of their vision. This can lead the victim to be increasingly paranoid and tense.


Figures of either the dead or distant might be seen to wander past, causing the victim to chase after them and out into potential dangerous situations.


Inanimate objects will appear in random places. This is particularly dangerous when out in the marshes if the objects are large enough, or obscure enough, to disorient the afflicted.


The final stage of the hallucinations is believed by some to be akin to enlightenment. At this stage it is believed the afflicted can see into Dumivil.

These same hallucinations is one reason why there are those who don't fear the condition; people believed that the plant would give them the ability to converse with the spirits and the deceased. The hallucinations at the fourth stage are so vivid that the brain fills in the missing information, giving sound and voice to the figures they see. As such, people went out of their way to harvest these plants and develop their own private garden of them. This they did with the knowledge that they would not only receive the visions, but the other symptoms also.
Local Shiarites treat these people with respect and honour them as spiritual leaders, believing that through them they can send messages to lost loved ones and receive guidance from the wandering spirits. Travellers and locals alike visit these holy people to either satisfy their spiritual curiosity or in hopes for some insight to their future. The visions, of course, are totally dependant on the interpretation of the shaman with none able to challenge what they claim to see.


Not all Shiarites welcome the condition and did what they could to discover a cure for it. Ironically, it was found within a local herb that is common in all Shiarite dishes. A regular diet of such a herb has provided many with a natural defence against the spores, but this is not immunity. Considering this revelation, they served dishes containing such leaves as part of the welcoming ceremony to visitors, believing that ingesting them would help as a preventative to the unwary travellers.
Ingesting the herb after being infected had little affect but if a poultice was made from the herb and smeared across and around the eyes, the infection would begin to clear. If the hallucinations have reached Stage Four however, the process is much longer and requires an additional treatment. 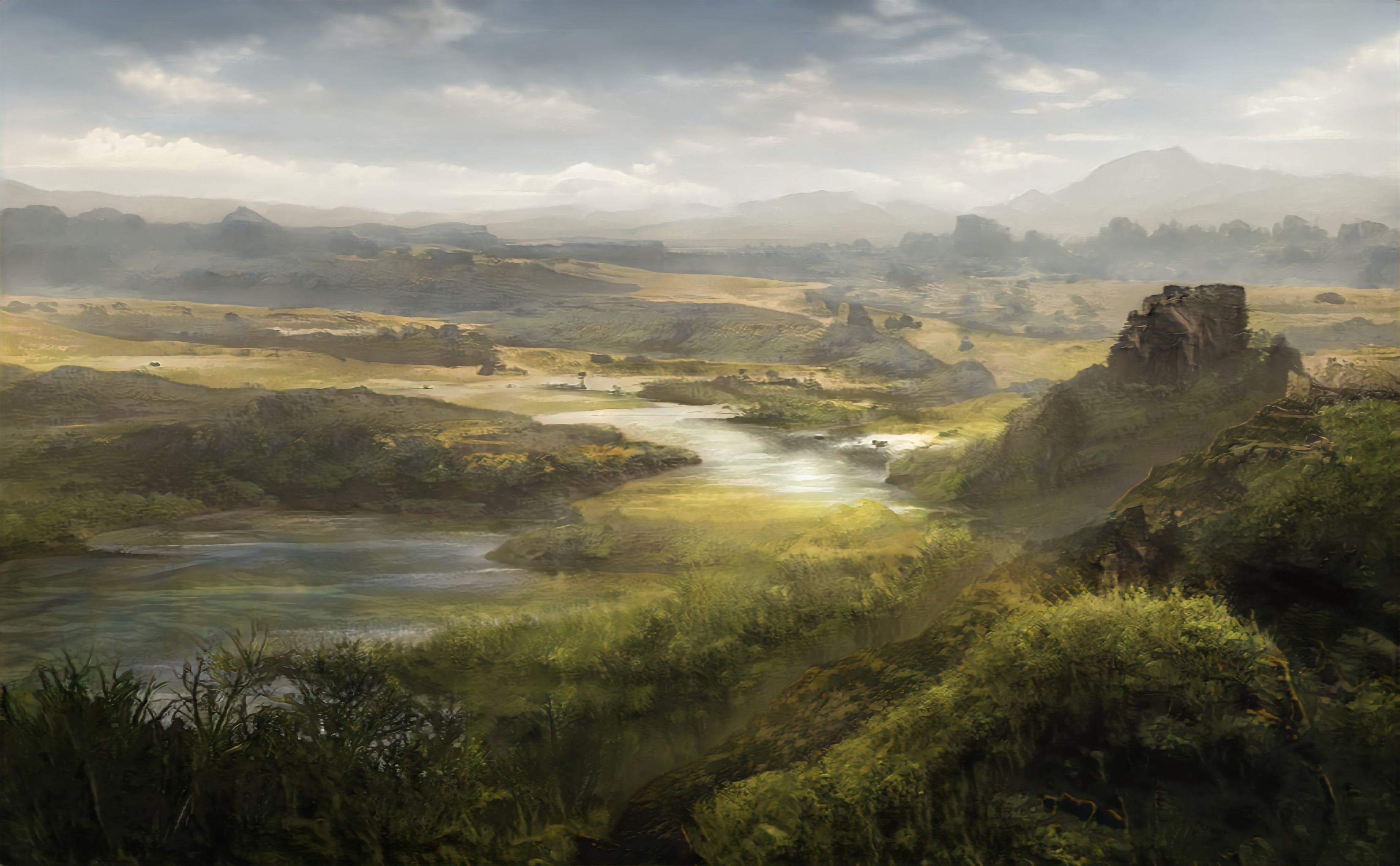 by AP. (via Artbreeder)

At first the symptoms are common enough for the afflicted to not even know they have inhaled the tiny spores. When their eyes begin to puff and their vision becomes blurred, the first layer of film forms.   The progression of the infection is as follows:

Those who did not have any desire to partake in the hallucinations styled veils for themselves to wear when out travelling and working in the marshes. Despite this being a nuisance, it was a necessary one that even became a part of Shiarite fashion.   The rise of Marsh-Eye saw a fall in the number of travellers passing through the lands, with many believing that the water spirits in residence would curse them. Others were not so reluctant and brought offerings to leave at local shrines with them before they crossed. These were often the merchants and traders who could not afford to follow the longer route around the marshlands. The local guides for such folk gifted them with veils and facial coverings and slowly this encouraged others to brave the journey too.

The Marshes of Shiarun Coming Soon!

Great article, I really like the cultural aspect of this infection and ho people actually wants to become infected despite a treatment being easily available :D

I really like that some people want to be infected and othes don't, and I also really like how it affected the fashion in the region. Hallucinations are scary!

Thank you Emy! Yes, I can't imagine I'd ever willingly want to suffer from hallucinations! x