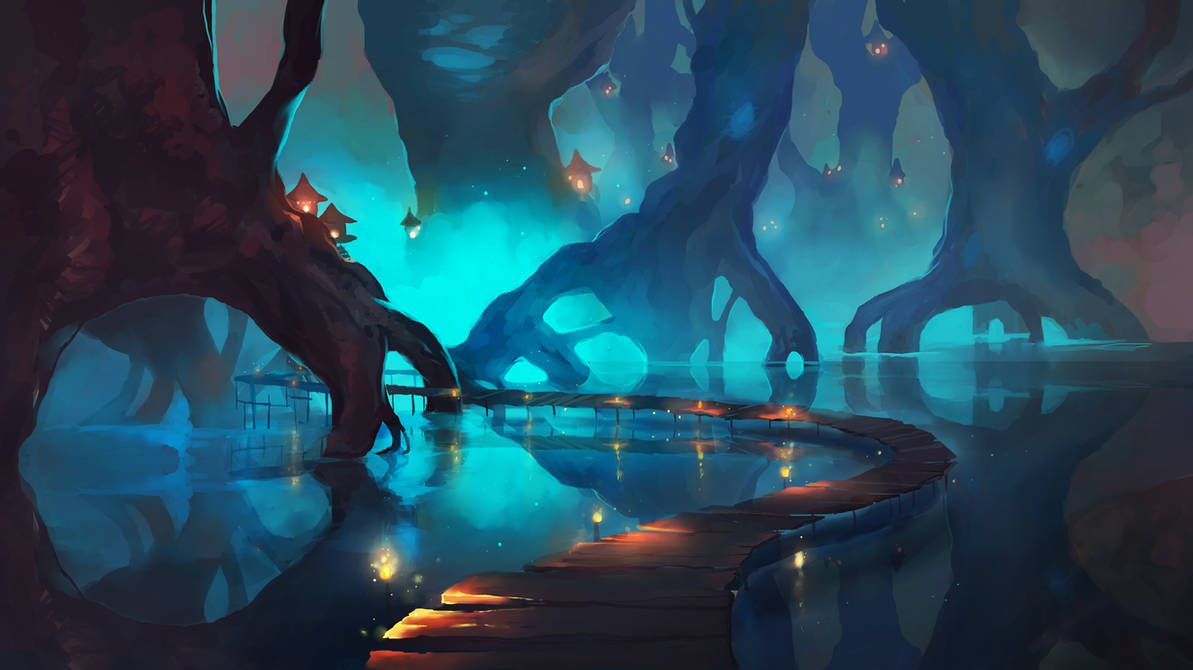 "I swear, that thing's a godsend. I don't have to withstand the suffocating pressure of the depths once i've had a serving of that"   Captain Shovon Dasgupta, A Vadranian soldier talking about the plant

Throughout the great war, the oceans of Elladia have been just as fierce a battleground as the land. Many ships have fallen to barrages of heavy weaponry, from both opposing ships and land based batteries. Many shores bear the footprints of millions of soldiers, which can never be washed away by the oceans tides. The seas have had much blood dissolved in them, of both Argonite and man and merfolk as well. But there is one region which remains oft ignored. The depths of the oceans   It has been a battleground for only a recent while. Ever since the invention of submersibles and diving suits which could withstand the pressures of the deep ocean, the place beneath the waves have become a battleground as well. It is one place where the Argonites dominate, having relative control over the depths and being able to use it as a valuable ferry for their endless operations. But even in the relative safety of their metal mounts, the Argonites must keep aware still, for every nook and corner may be home to lurking groups of human soldiers, fuelled by a mysterious plant and ready to strike at any moment   Cyreniat has been harvested for a long time, even before the development of submersibles by Argonites. It grows practically everywhere, from the shallow shelves of Elladia's tropical seas to the deep abyssal depths of the polar oceans. The plant exhibits variety by region, and in fact, is an amalgamation of various other organisms, including plankton and microorganisms. When ingested, Cyreniat causes a number of chemical changes in the body that make the body more adapted for underwater life. Overdosing on it however, can lead to deadly consequences, including irreversible mutations and cyanosis, for both humans and Argonites   Cyreniat is a key ingredient in the diets of the littoral parts of the Imperium and the Aegean empire. It is worshipped by both humans and Argonites as a divine gift of the sea god, and it is a custom to offer a prayer to the sea before ingesting it. This small plant may as well be the key to victory in many of Elladia's future battles, as the corruption spreads throughout the waters of the world and awakens the beasts within

"Through his visor, Wisnu could see a number of glowing orbs ahead. Their light was cyan, mirroring the colour of the were located in. He swam closer, and to his surprise, the light receded. He could now see the plant. It was strange, the top part of it being enclosed in a sort of transparent capsule whilst the other parts seemed to move around, almost like an animal"   A pre imperial human, encountering a Cyreniat specimen for the first time

Cyreniat is known for it's odd apperance. The top of the plant, which is bulbous and fleshy in shape is enclosed in a transparent and sometimes bioluminiscent capsule. Recent studies have shown that the capsule is made of a biological material resembling glass, which is hard but ultimately brittle. The rest of the plant consists of a long, robust body, out of which protrude many 'arms' and other limbs. Each of the arms seem to have their own purpose, some being pointy and venomous to deter aggressors whilst others have leaves and are used for photosynthesis   The plant's body is also littered with many eye like structures, each of which can move and follow other things. The roots of the plant are also detachable, providing the plant with a means of locomotion. The roots also have a connection with the Hydrosack, an organ of the plant which resembles a swollen piece of flesh. The organ's functions are mainly filtering out dirt and waste from the nutrients that the plant ingests, as well as serving as a sort of immune system for the plant

"This plant, this little plant can turn our feeble bodies into the worst of nightmares for the Argonites"   Excerpt from a lecture being given to students at the Imperial Naval Academy

Cyreniat is widely used, not only in military applications but in civilian as well. It's use as a medicinal herb in treating waterborne diseases is well known, and doctors would immediately prescribe this if someone suffered from any aquatic disease. Other than that, Cyreniat is a good source of nutrition, being easily cookable and offering abnormally large amounts of energy for a plant. It's greatest use however, is in underwater applications   When Cyreniat is ingested ( especially with a few other ingredients), it vastly improves a human or an Argonite's body to stay underwater. The lungs are expanded, and they can filter oxygen from the water as well. Water that is breathed in is also broken down into Hydrogen and Oxygen and used for various purposes in the body as a result of ingesting Cyreniat. Some common underwater adaptions inherited from eating Cyreniat include

Despite it's amazing use for divers, marines and many other people's, Cyreniat has a darker side too

"Keldris. I don't know what happened but that weed did something to him. It turned him from a man into something of the seas. We had to put him down. It was becoming too much for us to handle"   A human soldier, talking about the overdose of Cyreniat

"No sooner had he touched the capsule Ardris felt a burning pain in his chest. He looked down, seeing blood diffuse out into the water from the newly formed wound. Before he could react, the plant reached out, the limbs becoming tentacles and latching onto him. Gathering his strength, he broke free of the plant's hold and swam away as quickly as possible   An Argonite youth, in an encounter with a subspecies of Cyreniat

Cyreniat are known for their fine tuned senses. The bioluminous glow of the plant is actually a burst of sight, which is released periodically to scan the surroundings for predators. The glows are electromagnetic waves, which can detect the presence of other organisms from nearly a kilometre away. This allows the plant to prepare in advance for the coming onslaught, as it activates its defences and readies itself to fight the predator   Asides from this, the Cyreniat also has other keenly developed senses . Its vision is aided by millions of tiny eyes, each of which come together to form a composite image. It's roots allow it to feel movements from quite a distance away. The only thing in which it can be said to be lacking is perhaps hearing.. This is often used by harvesters, and they take great care to make as little noise as possible when approaching the plant
Scientific Name
Cyreniensis Aquaticus
Lifespan
4 years

Join Elladia Discord!
All content in this that has been made by the author ( Artwork and music used from other artists and musicians have their own copyright) falls under the CC BY license. This means that anyone is able to tweak, build up on and remix upon any of the content here and even use it commercially as long as they credit me as the original author. Any content found violating this rule will be requested by the original author to be taken down immediately.   Disclaimer: If the work found is racist, abusive or discriminatory in any way, then i shall reserve the right to take it down even if the creator did credit me properly. This is a strict rule and will be enforced whenever i see instances of it.
Article template
Species
World
Elladia
Author
Redclaw123
Publication Date
10 Apr, 2021
Creation Date
8 Mar, 2021
Last Update Date
10 Apr, 2021
Visibility
Public
Views
379
Favorites
10
Comments
4
Work In Progress

Hi Elias! I really enjoyed the literary flow of your article, and I don't think I've come across any peculiar plant articles that metamorphose a person yet so great job on originality. My two main questions are:   1) Other than access to the deep, how did the plant help militarily? Is there a specific conflict where it was first used, or used exceptionally well, that you could reference? 2) If overdosing is a risk, why/how is the plant used in cooking? Is there a way to consume the plant without the effect?   Lastly, it may be because I'm on mobile but you have an extra space in ( emphasize, your Turning header is indented, and it seems that a lot of periods and colons are missing at the end of your paragraphs. I personally don't find this bothersome as a reader but others may get hung up on these minor editorial items.   Great job, I look forward to seeing more of your creations in the future!

Great article and great plant :D I love what you say about all the senses the plant has and how it is able to affect people's body!   Here are a few notes I took while reading:   What are the Argonite? Merfolk? You could a quick explanation with a tooltip.   I like all the changes to the body this plant does.   "Ability to Send Pulses of Light that help locate targets" how does that work?   You didn't talk about farming/harvesting the plant. I sit difficult to do? You mention the defences of the plant earlier is I thought it must not be that easy, but then you say it's used in cooking too so it must be commonly available for people. How expensive is it to get?   How socially accepted is it to take the plant as an enhancing drug?   " It turned him from a man into something of the seas." Oooh that's intriguing. Can you say more about that or would that be spoilers?   The ability of the plant to see is interesting! I(m guessing that how well it is able to see depends on how deep below the surface it is growing…   I'm not sure that not making too much noise would be that helpful with approaching the plant. It would be able to feel the movement people makes in the water, wouldn't it? Do your people perhaps have some technology that allow them to trick or confuse it?

Pretty interesting plant! Its a cool aspect that it can help change the abilities of people. There are a lot of unknowns still so perhaps it would be a good idea to add tooltips for stuff like the Argonites. Also how do they gather it and why do the humans have an easier time finding it? Those eyes on the plant seem very creepy :p

Sneak, sneak, sneak up on the useful plant... Stab, stab, stab the argonites...