The Grand Duke is the merciless steed of the fames Dr. William Joseph Bumblebottom. The land vehicle, affectionately named "a car," was commissioned and paid for by the 13th son the the Grand Drake of Galtorum. The Elaithian Shipmaker's were the commissioned party for such a vehicle and delivered in a timely manner. The Grand Duke was shipped to the port city of Galtorum after it's creation in 1126. The keys landed with the now owner - stylish and extravagant adventurer.   The inspiration for the car came from Dr. Bumblebottoms father an Drake of Galtorum. Although the names are slightly different, the vehicle is a nod to the invulnerability of the Drake himself and the integrity with which he endures throughout time.

Dr. Bumblebottom was the first, and will likely be the only, owner of the Grand Duke. The chassis of the beast herself is covered with a plethora of different scars and memorabilia.   The first and most notable scar of the vehicle is a large claw mark and accompanying dent upon the right side door. This claw mark was in fact dealt by a terrifying beast of the northern lands. The shimmering wastes are home to many an unknown creature, to which Bumblebottom had some very narrow escapes. The creature which dealt this mark, however, was none other than a Remorhaz. These deadly beasts ruffled with the Grand Duke herself and inspired the invention of a kind of fire-proof coating within the paint.

As yes the fire adhesive. Magnificent technology. The kind which saves lives indeed! I must see if this coupled with the submarine cabin would fare well in a volcano.... - B

The second most prominent scar lies within the machinery itself. Deep within the caverns of the old capitol city, of the Throzmuri Kingdom, lies thousands of discarded machinery. The trick to this scar though, is that the machinery which they encountered was not wholly decommissioned and nor was it insentient. The battle which ensued left the Grand Duke cleaner than ever but now with a mind of its own. Bumblebottom began his journey in the Frozen Wastes to the North of the Eldrour Woodland as a group of two - he left as a group of three. Somewhere deep within the mines of the old capitol lies the old and forgotten realm of the machinations.

Of all the friends I made within my years adventuring, never did I encounter such a loyal addition to my family than I did with 2992. -B

Another magnificent mark upon the Grand Duke is the addition of certain corals within its folded top. During Dr. Bumblebottom's adventures into the Tolarega Reef, he encountered the Tritons for the first time. He was welcome almost immediately and sprung at the chance to hunt with them in the depths of the Blue Gulf. During this adventure, the son of the Drake encountered a reef whale; the magnificent beats of burden which rival that of villages. Although normally oblivious as well as harmless, they often bring with them a parade of sharks. One technique that the Tritons of the Blue Gulf use is to over their armor, weapons, etc with corals to blend with the landscape below. This camouflage works considerably well against creatures who's sight is poor as it is.

The schematics are noted within the certificate of authenticity (attached to this document) but will be detailed here.   Bumpers with Additional Impact Absorbers: Needed for the foreseen potential collisions and impacts from various beasts of burden.
These beasts of burden did end up becoming an issue for Bumblebottom and his crew. The Bumblebottom party was established through tough means and it was only fitting that the Grand Duke be in optimal fighting condition for them.   The Pressure Guauge, pressurized cabin and side door strength were to upkeep the vehicle in the event of a water ladning. For the most part, the Grand Duke was a land vehicle. However, during his stay in the port city of Auhatti on the, Dalsheikh Peninsula, Dr. Bumblebottom commissioned special work to be done by some Triton handymen after learning about the Coral City.

The Remorhaz is a terrible beast indeed. The outside hurts like fire and the inside stings like a bee. Good thing I had my metal steed by my side. -B

The Arcanum sliding roof and in line bar were purely for style and grace. However, they did lead to a few close calls on the journey's. The first issue was found with the power supply and the Arcanum roof. You see, the Elaithian Shipmaker's built the vehicle with the assumed position that the vehicle would be of land. They did not plan, however, for the antics of the young son of Galtorum. They did not plan for the car to be fully submerged within 1. the gut of a Remorhaz, 2. the Umedan Marsh and 3. the Ocean. For this leg of the journey, the vehicle had to be outfitted by the local Triton's to "coralify" the engine.  Regardless of where it has been, the Grand Duke has carried Dr. Bumblebottom through thick and often watery. The future is yet to be told for this formidible beast - perhaps one of his young daughters will pick up the reigns. 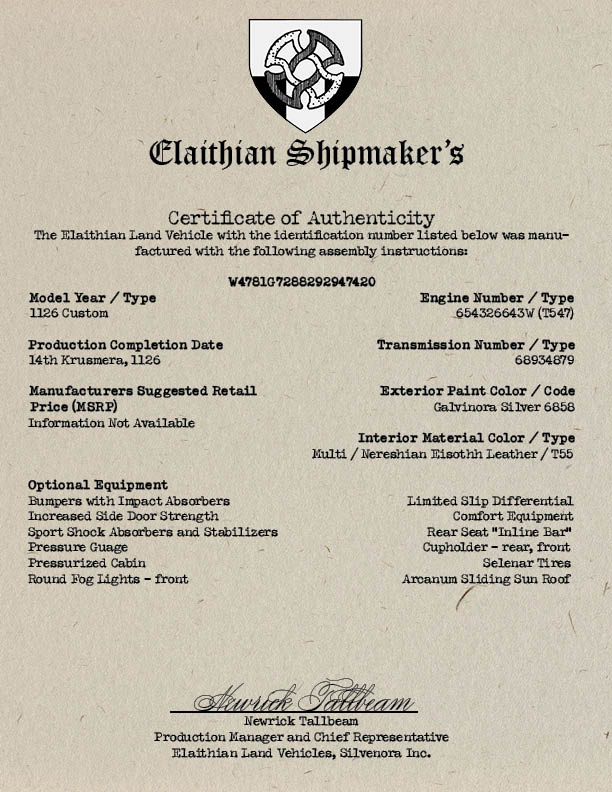 Certificate of Authenticity by Myself
Owner
Dr. William Joseph Bumblebottom