The Elaithian Shipmaker's were one of the first businesses established in the city of Ty'l Anore. Their history is one, intermingled with the Elven nobility and shaped by ever-expanding trade routes. Ty'l Anore sits on the Kinderland Strand. This advantageous shoreline marks the halfway point between two of the continent's most valuable ports - Auhatti and Galtorum. 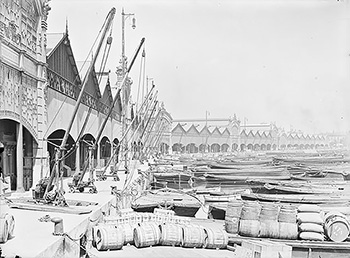 sail boats on dock by BVNP
The Elaithian's, who began as singular craftsmen, began to build renown through their repairs. As sailors arrived from ports unknown, the carpenters would offer their services.- for a small fee, of course. They eventually formed a guild, creating a standard of workmanship and health. Hours and day rates were established as were mutual trading partners.
The guild eventually caught the attention of the newly formed I'll Dorei Magocracy, who sought the guild's skills for building naval ships. The guild eventually split as the majority of its members wished to keep their secrets and woodworking traditions separate from politics. A minority of its members sought coin and glory, forming what the Magocracy now refers to as the Elaithian Shipmaker's.
The Elaithian Shipmaker's established the Warehouse District in the South-Eastern portion of Ty'l Anore. Their workshops became so streamlined, that the Shipmaker's were able to send boat's on their maiden voyage's one and three-quarters of a year after beginning. Eventually, the Dwarven Kingdom, the Throzmuri Kingdom, to the North shared their Arcanum technology and created a demand for airships. The Elaithian Shipmaker's entered into a new contractual agreement with the I'l Dorei Magocracy. The recent advance in technology forced the Elaithian Shipmaker's to move their headquarters to the capitol city of Silvenora; Thus, the Elaithian Harbor was built.

A Culture and Structure of Greed

Considering the sensitive military contracts the Shipmaker's hold, there is an inherent degree of sensitivity and secrecy within the organization. The use of military grade Arcanum within the engines of the ship creates, within specific ships, the need for secret clearance.
The structure of the Elaithian Shipmaker's is like any other business; There is a leader who oversees the the majority of the decisions and various branches which become more and more specialized.
At the top of the food chain is Fenril Goldenleaf. Fenril is not only the acting CEO of the Elaithian Shipmaker's but he is also the head of the Goldenleaf House. Bloated with the greed of coin and fame.
Below Fenril is his brother and partner Geld Goldenleaf, who is responsible for the management of the finances. His formal title is Treasurer.

"Those who do not adapt, will fall. Those who fall will never achieve greatness". - Fenril Goldenleaf


The next burden of responsibility is bestowed upon Newrick Tallbeam, the Manager of Production and Arilie Moonhand, the Manager of Marketing and Development. Newrick, a stout halfling, works within one of the offices and manages the factories, shipping as well as orders of production. Arilie, a slender and lightfooted halfling, works the sales, meets with clients and manages the engineers who oversee the Arcanum. There is also a small office dedicated to the management of contractual agreements and cost, known as the Elaithian Law Guild.
As the chain of command moved downward, the more specialized the jobs become. Eventually, the line will end with the men and women around the continent who harvest the raw materials upon which the ships rely on.

The Elaithian Shipmaker's are hushed about their complete net-worth, supported by the secrecy of the Bank of Silvenora. They are, however, very transparent with the amount which they donate to the city and varying private businesses. The evidence of this can be found scattered throughout the city, particularly the Cloud District, where there exist plaques labeled "In Thanks to the House of Goldenleaf" in common.
The Elaithian Shipmaker's began in Ty'l Anore with the slow building of the Warehouse District in the South-Eastern most part of the shoreline. Since the company moved all offices and most factories to Silvenora, the majority of warehouses were sold off as private assets. The Shipmaker's still retain a small portion of the district, curating vessels solely for the Arcane Navy. Now the organization hold the majority of their factories and office buildings within the cloud district in Silvenora. Along with the land based buildings, the organization also boasts a large fleet of private aerial freights which quickly and efficiently move good across Eldrais.
The Elaithian Shipmaker's build an array of differing ships, contraptions and vehicles. If it flies or floats, the Shipmaker's have probably made at least one part on the vehicle. Their factories work endlessly to push out parts not only for their ships but also customers who call in for repairs. The Shipmaker's hold a sort of monopoly over the Magocracy as they are the only organization established enough to produce the ships of war that the I'l Dorei Magocracy now relies on. Not only this, but the Goldenleaf Family has, throughout the years, established ties with the nobility of Ty'l Anore and Silvenora. These relationships have fostered a greater social protection within the organization as well.
Combined with local blacksmiths, the Elaithian Shipmaker's have also been able to establish a range of different battlements which are provided with the varying models of craft. Not all of the craft, however, are outfitted with armaments. With the introduction and demand of Arcanum to the skies, those who would have normally requested the purchase of sailing vessels are now demanding those which fly. The numerous ship types can be found throughout their catalogs and even custom creations upon request.

The most common ship frame is the Mae'l Oth, created with hardwoods found in the Selenar Wood. The frame of the ship is built in a a crescent moon shape, with the planks of the hull laid edge to edge and fastened together with a a glue made from the pines in the Eldrour Woodlands.
After the frame is constructed, the carpenters and shipwrights begin work on the masts by crafting them from long pines found either in the Haldir Forest or shaved trees from the Selenar Wood.
The pitch-melters are the one's responsible for the concentration of the pine resin, imported from the Throzmuri Kingdom into the Magocracy. The harvested trees are saved as they are a sustainable material source, and the resin brought to the town of Ferness. Ferness is a town on the edge of the Eldrour Woodlands. The town harnesses the power of the River Annan to power the large mills. The pitch is then sent down river into the Achnacairne Bay on small naval freights. The freights end up on the shores of the Tiksi Gulf, on the Western coast of the I'l Dorei Magocracy and unload at the docks of the town Fe'it.
Blacksmith's, along with a specialized selection of carpenters create the battlements which are fitted onto specialized sections of the vessels, if they have any. Battlements come in a variety of sizes, ranging from small and individual artillery to heavy battlements such as elemental charges and cannons. 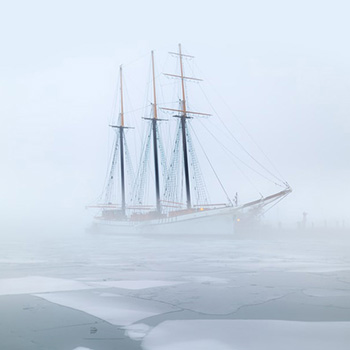 Foggy Ship by Filip Mroz
Travel within the Magocracy is easy enough with the road access, but those who wish to expedite their travel can use either sea-fairing or air-fairing options.
Sea fair is by far the most extensive network of public transportation. On the West coast, routes are limited as the amount of ports available are also limited. Those who wish to travel North and up the River Annan must use the sea port of Fe'it. The types of ships which traverse this side of the continent of Idune are usually outfitted with large metal points on the front bottom of the ships. These are absolutely crucial during the winter month of Miarus, as ice collects around the Achnacairne Bay. This feature is needed even during the summer months, the farther North one wishes to travel. Although, the Northern most routes are rarely used anymore, if at all.
The Eastern coast of Idune see's the most sea travel as ships move from one port to another. Raw goods are usually exported from the Dalsheikh Peninsula, through The Blue Gulf and along the shores of the Kinderland Strand. These ships often make a stop at Ty'l Anore, as this port sits around the middle of the continent. Here, ships will stop for repairs, to rest and restock their food, etc. Repairs on the Southern inbound ships often fix repairs from pirates and rougher weather such as hurricanes. The Elaithian Shipmaker's still hold some of the Warehouse District and tax those ships which enter their specific moors. Although the ships have a plethora of different slips to choose from, those who can afford it normally choose to make business with the Elaithian Shipmaker's. The goods which come from the Southern portion of the continent are unloaded, taxed and shipped throughout the Magocracy.
A similar process occurs as ships come to and from the Northern Throzmuri Kingdom, which often exports finished goods. Again, these are taxed for entry into the Magocracy. The ships coming to and from the North often require more repairs from geographic consequences such as more frequent ice, colder weather in general, deadly rock formations, etc.
Considering the cost of construction for most ships, anything larger than a singular glider is fairly expensive. The ships begin at 20,000 gold pieces and only increase from there. While construction has a minimum, there is definitely not a capstone. This is especially true as new technology comes out, gilding becomes more gaudy and the size of the hull increases.

The Hammer of Diligence

100
The I'l Dorei Magocracy and the Elaithian Shipmaker's have collaborated on a number of different technological advances; Some more public than others.