An elderly tiefling woman from the factory town of Rel-Kadrar. She and her husband were leading figures in Rakka’s Raschid Junta of the mid-800's, but after Jalil Hafiz's coup in 877 she was forced to flee the country or face retribution from Hafiz’s forces. She traveled through Glace and the Free State of Thorvald before setting in Myltev's tiefling community in its capital of Nikograd.

In 897 she sold the adventurerJax a set of half-plate armor, the same one her husband used to wear in battle. Although suspicious at first, she became a supporter of King Nikolaj Baratov's regime after he seized power from Cpt. Tarkov that same year. She helped build support for the new king among Myltev's tiefling population until her death in 912. 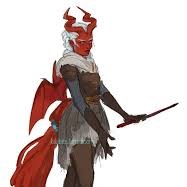