GHG Session 24: A Long Rest Is in the Cards

Month 9, Week 4, Year 918
The journey back to Ardin was quiet for the Fortunate Five, now reduced back to their titular number. The party had freed the halflings from Bianca's clutches and would receive a hefty reward back in town, but there was a solemn mood in the group as they thought about all they had to leave behind in the aqueducts at the sight of Gray Hat.    Despite their losses, the group's members were now celebrities profiled in detail by the journalist Rutik Kapuscinski. Phaedra could tell that she and the rest of the party were going in different directions, so she stayed at a different tavern from the rest of the team while finishing up her business in Ardin. She met with Rutik to vouch for Josephine Elderberry as the Treeleaf Union's new prime minister, an endorsement that would carry weight as a celebrity adventurer. Later that weekend she would have one final performance with Ysmyrelda at the Sandbox tavern, while a mysterious rover by the name Itakshir offered free tarokka readings to the party.    To add to the uncertainty, it appeared that Jezebeth's room had been entirely cleared out of all its papers and belongings (the aetherforged included). A halfling man by the name of Nebin interviewed the party about Jezebeth's disappearance in the tavern's common area, filling out an official report to calm any concerns inevitably raised by Rakkan authorities over the incident. The party had one more carriage ride together on their way to Galway, after which Phaedra continued on her own towards Broggfey and the Redscale Rumblers.   Months 10 - 12 (Laertum, Nimbus, Cordeliam), 918
The months flew by quickly after the harrowing weeks of adventuring through the Imperial Marshes, the party splitting off to work on individual projects and ventures. Windred became fluent in Gith with Zan'kiri's help, crafting new healing potions getting an enchanted tattoo to commemorate her campaign against Bianca's spirits. Zan'kiri quickly burned through his gold purchasing new magic items and spell components, everything from a small statuette carved in his likeness to over a dozen pigs in Dhyrlonis. The party could stay in the Gilded Hecat Guild's headquarters rent-free, Bubbles taking use of the building's facilities to master the art of nutella making.   Meanwhile Ys found plenty of time to network in Sardivelia, having breakfast with the eccentric Loopmottin but demurring against enrolling in any of her magical subscription plans. Next in Silvio she reunited with Leo Mancini, formally swearing membership to the Handgun to finally have access to all of her cloak's sweet abilities. Leo gave her a quick primer on Handgun responsibilities, allowing her to go on a couple of heists with the Red Whisper to get a feel for the work. Leo also mentioned a gala happening in Havre next summer, an event that he fully expected Ys and her friends to help out with.   As 918 came to a conclusion, the FF finally got some new additions to their group. The introductions happened in Kirby's office, the two new recruits waiting in the closet for the the big reveal. First there was Reetma, a Rakkan tiefling skilled in the art of hand-to-hand combat (enough to give Windred a run for her money). Next there was Beguiler, a strange magical creature that looked like a kangaroo. Kirby insisted that he was not a fairy, but it was clear to everybody that Beguiler was some kind of fey.   With introductions out of the way and Zan'kiri running out of pigs to consume, the party started planning out its next big adventure... 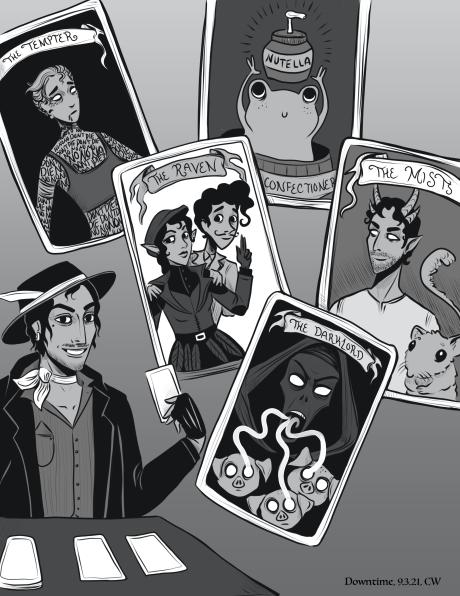