"I've had half a dozen bugbears risk their lives for me in the line of duty. I hope many more will receive such an honor." -Jalil Hafiz, 895, 4th Cycle

Tough and sturdy fighters, the bugbears have made a name for themselves as resilient fighters across Pescaliat. No fighting force would be complete without a detachment of bugbears, from revolutionary freedom-fighters to well-heeled mercenary guilds. Bugbears will fight tooth and nail for whoever's paying for their services, but all bets are off if the assignment involves eliminating a fellow goblinkin. While bugbears flee their homelands in search of mercenary work, some choose to stay close to home finding ways to elevate their goblinkin and fight for an autonomous goblin nation-state. 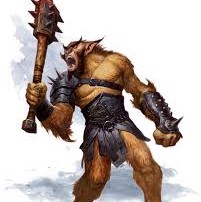