Catriona Quinn's adopted sister from Hakon and current high priestess of the Temple of Erivo, 892 - Present. An avid painter, she went missing in 873 after last being seen crossing the border into Avicenna. She was abducted and brainwashed by the Court of the Undying, but she was rescued by the Royal Knights Brigade in 874 at the Battle of Stockton Keep. Catriona helped induct her as a vestal in the Temple of Erivo in Gameria to help her recover from the brainwashing, quickly proving herself a loyal devotee of the temple. She currently holds one of the highest positions in the Temple of Erivo, second only to Queen Astrid herself. With Queen Astrid's help in 896 she managed to conjure the adventurer Flora to defend Gameth and the Temple of Erivo from all the rising forces of evil in the world. Her personal history and miracles in the service of Erivo inspired a new generation of believers, reiterating many of the temple's tenets on the importance of life and nature. As a survivor of the occult, Alma has proven to be a more moderating force when it comes to the punishment of cultists captured by the RKB. 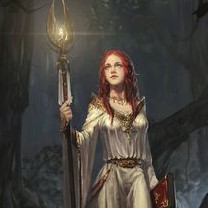