The Crystalline chills to this day only affect the momos (Kamenale Momone). Their wild sister taxa, the nomos (Kamenola Nomone), appear completely immune. Which baffles the scientists and scholars.
There are a couple of cases of outbreaks every year in poorer areas around the world. There is also a black market for the crystals so there are some unsavory breeders that breed the momos and infect them only to harvest the crystals. 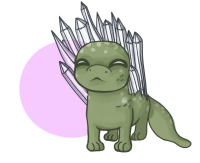 The virus is transmitted via activities which generate aerosol particles or droplets, like using their tongue or breathing in close proximity to other momos susceptible to the virus. The virus can be transmitted during the entire course of the disease but it's most frequent while the scales have started to rub off.

The cause of this disease is a virus named Gasorola cirisala, which belongs to the genus Genosocavirus. A virus which inhabits mana cells.   The date of the first appearance of Crystalline chills is still unknown. However, it is agreed upon by most scientists and scholars that it first evolved in small animals on the eastern continent several thousands of years ago.

The incubation time between the contraction of the disease and the first obvious physical symptoms is around 3 days.   The first symptom can be easy to miss because the Momo acts like it is feeling cold. So the owner will turn up the heater or cuddle with it more.   The second symptoms are shivers and trembling as well as the limbs becoming stiffer. The Momo will also start eating less.   After that the Momo will start rubbing against corners and things, it’s scales falling off. Six days after the contraction of the disease, crystals will be protruding out of the momo's shoulders and around its neck. The look reminding people of the mountain gods. In modern times called mountain elves by the humans.   The according to owners their momos don't appear to be in much pain. They are uncomfortable and feeling cold. Some scholars believe that it is wishful thinking. 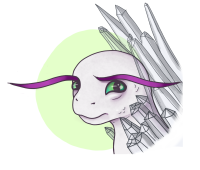 A vaccine was discovered 136 years ago but it was expensive so few owners treated their baby momos. It's still expensive but now, after the big push by "The society against animal cruelty", serious breeders must vaccinate their momos before finding owners for them.   The vaccine can be taken during the first days to alleviate the symptoms and reduce the chances of fatality. If the momo hasn't been vaccinated as a child, the vaccine will only be helpful within the first 4 days since the contraction of the disease.

The overall fatality rate for every case is 27% in the western continents and 49% in the eastern continents, but it can vary by how much crystals build up. Which is thought to depend on earlier health, environment, and age. 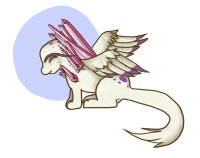 by BasicDragon
As long as the crystals stay clear and transparent the momo has a chance of survival, but if they turn pink or reddish the momo will die within a couple of days.
The breeds with wings have a slightly higher fatality and their wings might have to be amputated if the crystals grow too much.

After the crystals have fallen off the momos will have extensive scars that will eventually heal and their scales will regrow after a couple of sheddings. The surviving momos will be left with stiffer limbs and they will tire easily.   Their immune system during the month-long disease is low which can lead to the momo catching other diseases such as Heartrender, Purple death, and the common flu. The momo will still suffer from a bad immune system after the disease has left them.

The sapient species native to the eastern continent can be carries of this disease. It can't break out for them, however, scientists and scholars have worried that it might in the future.

"The society against animal cruelty" along with several other organizations tries to keep the disease at bay by forcing breeders to vaccinate their baby momos. A part of the problem is half-breed momos. Low-income families may still want to get a momo and they turn to buying a half-breed*. If they have gotten them from a shelter that can't afford to vaccinate their momos they might not be protected and a low-income family can't afford the vaccine if they haven't saved for a long time. Some might not even be aware of the disease before getting their momo.   That is why the animal rights groups are currently hosting charities to spread information about Crystalline chills and how to prevent it and also to raise money so the vaccine can be given to half-breeds in shelters as well as other places.   Crystalline chills can only be prevented with the vaccine taken when the momo is a child and keeping the momo indoors if it is infected. If you are living with a sick momo and you are a human, ani or mountain elf, you should take care in washing your hands and airing out your clothes before interacting with other momos, or people that may have a momo.   The crystalline chills will be eradicated when all momos have gotten vaccinated as babies.   *A half-breed is a momo whose parents are either from two different momo breeds or a momo and a nomo. 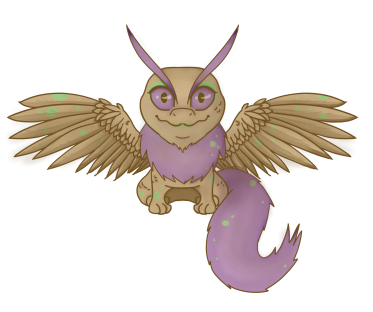 Most people feel sympathy for the plight of the poor momos and will care for their own momos, as well as give money to the "save the momos" charity.   There are however people that would like to profit on this disease as the crystals that grow on the momos are full with mana and can be used for magic.