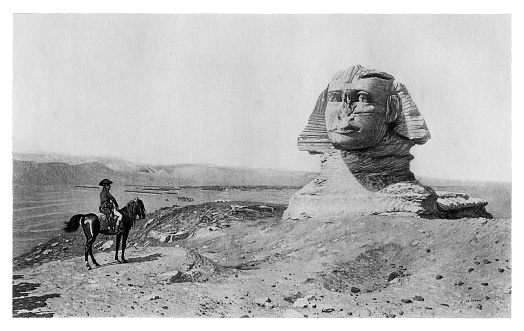 Go to Egypt 1799: Republic in the Sand Homepage

What has drawn we strangers to this strange land?     To what end have we marched through the desert under a brutal sun with no water in sight?   We - such a motley lot - soldiers from France and other countries who defy the old ways of rule under crowns, fully embracing the Republic. Scientist savants ushering in this new Age of Enlightenment ready to reveal the mysteries of nature and unlock the problems facing our perilous marooning in this ancient land of Pyramids and wrapped corpses.    Devilish mirages have driven hardened soldiers over the brink.   Marauders have picked off our men     We have defeated the many hordes of the legendary Mamelukes in the Battle of the Pyramids in the fields of watermelon.   It has been months now since we became stranded here.    We have made the most of the situation by making improvements in the city of Cairo: erecting lamps to light the streets at night and perfecting observation balloons to better scan the horizon for marauding Bedouin raiders who will rob every thread from a person and leave them for dead in the dunes.   It does not seem so long ago when we were celebrating our military victory of the Vatican.  Drinking of the finest Italian wines and trading in the procured silken robes and artifacts.  Now that tax collecting from the locals has become more difficult, soldiers seem to steal more from their officers and the savants and trade these rare finds for frivolous escapes from the constant torture of being these strangers in a strange, archaic, land.   Rumors circulate of ancient secrets revealed; of magic and ghostly horrors.   Every day could suddenly be our last, out here.  There is no end in sight.  No sign of ships sailing into Alexandria to rescue us from this utter separation from our respective homes in France and elsewhere.